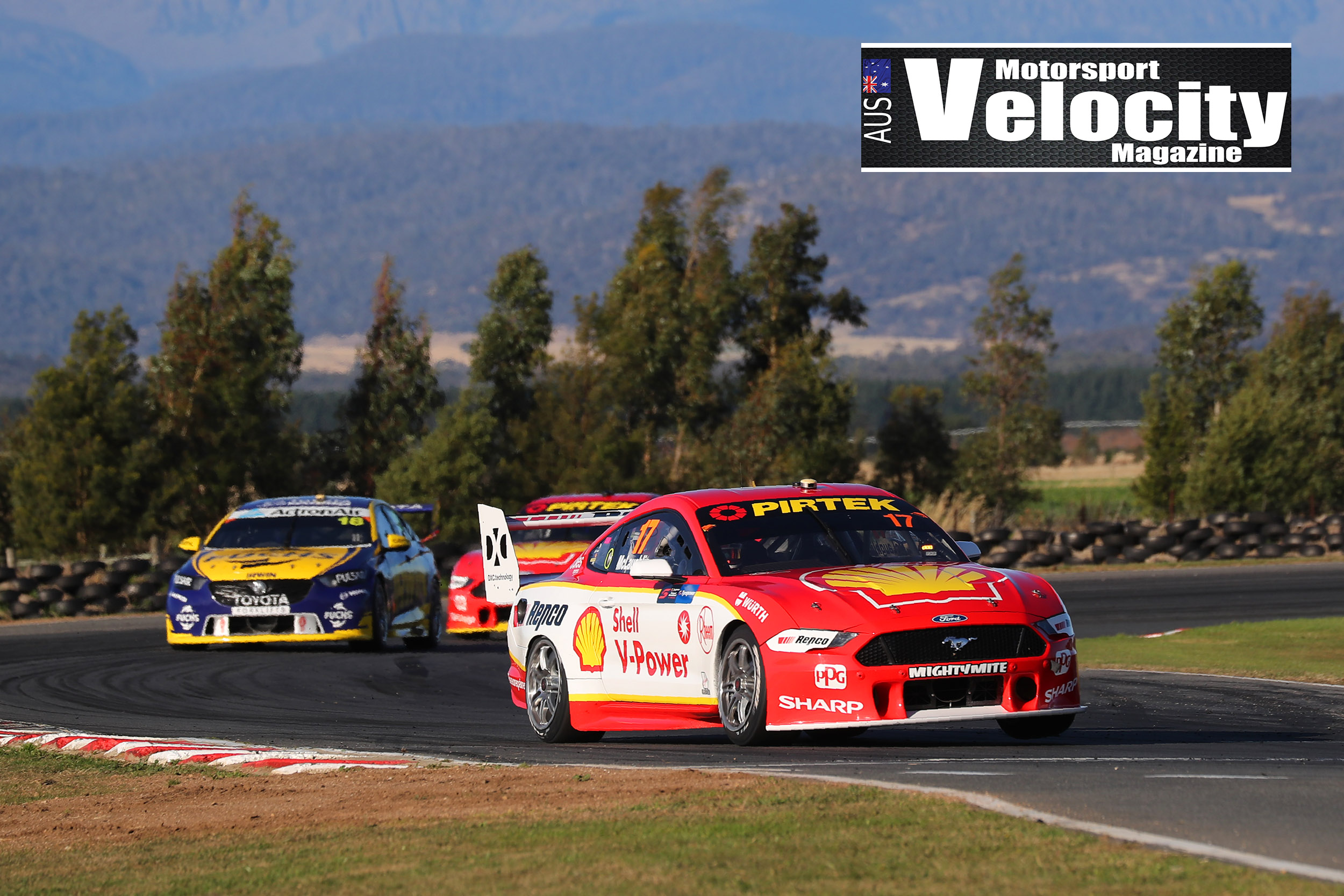 All the talk of Centre of Gravity parity and weight adjustments were finally put to the test during race 1 of the Tyrepower Tasmania Supersprint. The early indications suggested that the rule makers may have gone a little too far as Jamie Whincup and the Holden brigade topped each of the practice sessions that led into the three phase Armor ALL Qualifying.

Jamie Whincup’s pace granted the Red Bull Holden Racing driver an automatic entry into the second qualifying cycle, however a spin at turn 4 on is flying lap relegated the #88 Commodore to 15th on the grid. In contrast, new Holden recruit, Mark Winterbottom, put the Irwin Commodore on pole from Scott McLaughlin

“It’s awesome. I’m a bit emotional, it’s been a while,” Winterbottom said. “We’re a small team, but I think we can do special things and this is just another achievement. I’m so proud for Charlie, he’s been working his backside off to put this together. I’m lucky, it’s all falling into place and I get to play a part in it. I came here because I saw a good opportunity. I’m enjoying my racing, I’m loving working for this team.”

McLaughlin beat polesitter Winterbottom off the line and into the Turns 1 and 2 complex, then edged away to lead by a second after 10 laps. Reynolds got past Coulthard on the opening lap and ran third through to lap five, the pair traded places for a second time. McLaughlin’s Shell Mustang had doubled that advantage by the time pitstops started nearing the halfway mark.

Jamie Whincup’s race fell apart in the opening laps as he looked to take full advantage of the close racing in the midfield. He had moved into 12th by lap 2 and looked to pass Chaz Mostert on the approach to turn 6. The pair locked wheels and Whincup ran through the gravel with a punctured right front tyre.

“I must’ve run over a black cat or something, we went from bad to worse after qualifying, unfortunately,” Whincup said. “We were back in the pack, had to have a go and Chaz covered pretty well. Unfortunately our wheels interlocked and boom, end of the day. Whincup said “Disappointing, it’s amazing how fast things can change in this game, but we had a quick car then, so all we can do is put it behind us and see what tomorrow brings. You’ve got to qualify well, but in saying that I’ve done plenty of racing, so I should be able to come through. I got a good start, picked a couple off, but as I say, I don’t know what’s happening, but no luck today.”

McLaughlin kept a two-second advantage, which he duly managed over his team-mate for the balance of the afternoon. Coulthard was unable to find a wast past Winterbottom until the pitstops, where he was able to use the undercut to gain track position and move into 2nd.

A slower right-rear tyre change then meant the Penrite Holden started the second stint in fifth and well behind Coulthard and James Courtney, who was the first driver to pit, on lap 17. Shane van Gisbergen passed Reynolds on lap 39 and then Courtney four laps later,

The victory was McLaughlin’s first at Symmons Plains, sixth of 2019 and the 31st of his career.

“Great job for Shell V-Power Racing to get a one-two, awesome,” said McLaughlin, battling a sinus infection. “I’ll have a good sleep tonight, watch a bit of the footy and try and come back stronger myself tomorrow.”But that one is for Ford fans and all our team. We’ve worked hard behind the scenes. There’s been a lot of stuff thrown at us, but we just fight on. We’re a strong group.”

Coulthard cruised away from Winterbottom during the second stint to finish second, his second podium of the campaign.Van Gisbergen was the last driver to pit, on lap 29, which left the Red Bull Holden with a 20-lap run home on fresh rubber.Emerging in sixth, he caught and passed David Reynolds and James Courtney, then closed in on Winterbottom.There was still margin between Winterbottom and van Gisbergen, but the former lost ground lapping wildcard runner Jack Smith with three laps to go.It let van Gisbergen range right up behind, and he made a move stick into Turn 6 on the penultimate lap. Courtney finished 4th from Reynolds, Tim Slade, Nick Percat Anton De Pasquale and Mostert, who had battled with the Ford Mustang after the early contact with Whincup.