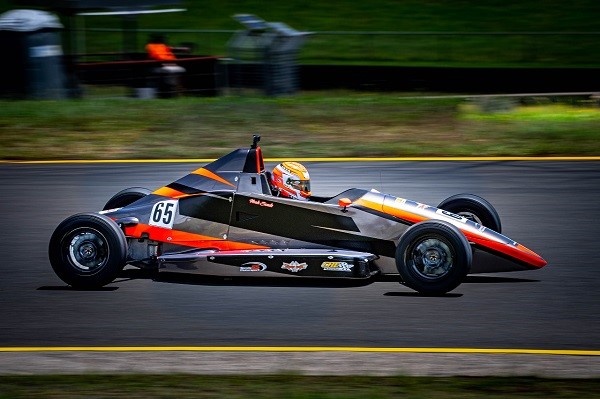 Leeton racing driver Noah Sands says a recent Year 10 Physical Activity and Sport assignment might give him the edge over his rivals when he returns to the track for this weekend’s final round of the 2020 NSW Formula Ford Championship at Goulburn’s Wakefield Park circuit.

Sands made his car racing debut in last month’s previous round of the championship at Sydney Motorsport Park and despite some impressive results, he said the event exposed some limitations to his fitness.

The 16-year-old was determined to improve his physical form and, when he was tasked with an assignment on fitness training programs as part of his Year 10 Physical Activity and Sport studies at St Francis de Sales Regional College, he decided to relate it to his racing pursuits.

“I always knew physical fitness would be a critical component of being a successful racing driver, so I chose Physical Activity and Sport as an elective subject,” Sands said.

“We had to do an assignment where we created a training plan, so I decided to come up with a program specifically designed for racing fitness.

“It was pretty cool to be able to do schoolwork that related to my racing – that would have to be one of the most enjoyable pieces of homework I’ve ever done!”

Sands said the key components of his program have been endurance training for strength and cardiovascular capabilities.

“In a race car, you’re exposed to very demanding conditions with a lot of repeated muscle use, extreme forces and high temperatures,” he said.

“The advantage of being fit is that you can maintain concentration in that environment for long periods of time, without feeling fatigued.”

Sands said the fitness regime has given him a confidence boost heading to Wakefield Park.

“I’m feeling great physically, but I also learned a lot from the Sydney Motorsport Park experience, such as how to race wheel-to-wheel with other cars.

“I’m confident we can perform strongly this weekend and carry some momentum into the 2021 season.”

This weekend’s event consists of practice on Friday, followed by qualifying and racing on Saturday and Sunday. Trackside admission is free for all spectators.