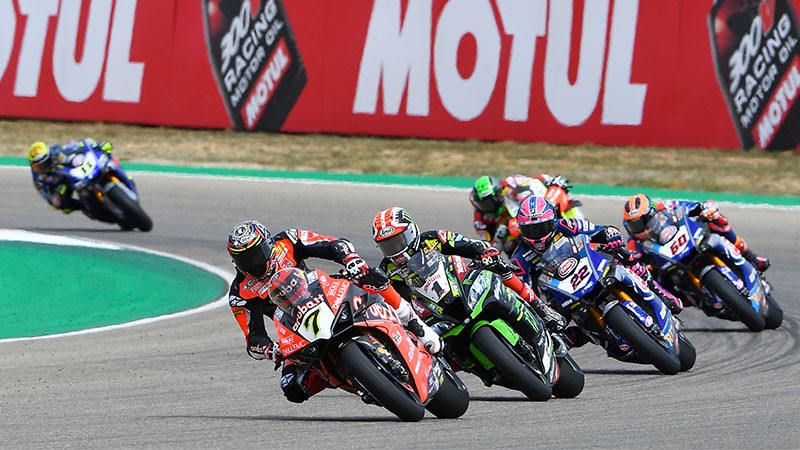 One enthralling round gone, another just about to commence. The MOTUL FIM Superbike World Championship has visited the iconic TT Circuit Assen every single season since 1992, and each one of those 54 races has been as spellbinding as the last; there’s magic in the air every time rubber hits the tarmac at the famous Dutch venue. Many a rider’s prayers have been answered at the Cathedral of Speed, a charming circuit with a folklore that is largely unchallenged in the racing world. With little time to waste between the Aragon and Assen rounds, which of the eighteen stars on the World Superbike grid will be able to enchant the fervent Dutch crowd?

Few words can describe how incredibly Álvaro Bautista (Aruba.it Racing – Ducati) has adapted to the Ducati V4 R and the WorldSBK paddock. The Spaniard’s average winning margin in these nine first races of 2019 has been of 8.5 seconds – including the three shorter Tissot Superpole Races.

It has been a demolition job unlike anything seen in the championship’s history and Bautista is yet to show any signs of becoming complacent. He has continued pushing into the final laps of each race in preparation for the tougher times and tussles that are certain to come, quite possibly as soon as this weekend: while in Australia, Thailand and Aragon, Ducati were already the dominant force last season, the red machines have not won a race at the Cathedral of Speed since Sylvain Guintoli in 2012. A solitary podium was Chaz Davies’ (Aruba.it Racing – Ducati) reward last season, although the Welshman also seems to be hitting form at the right time. Why have Ducati remained winless for so long at such an iconic venue?

One man is mainly to blame. Eight out of the last nine races at Assen have been won – in consecutive fashion – by Jonathan Rea (Kawasaki Racing Team WorldSBK). The Netherlands is Kawasaki’s kingdom and Rea has ruled over it with an iron fist for the past five years; if there is a track on the calendar where the four-time champion sets the rules, it’s Assen. Since joining the Provec squad, Rea has never come and gone from four consecutive circuits without at least one P1, a streak that coincidentally would be broken at the Dutch track if Bautista – or any other rider – monopolises the top step of the rostrum again. It’s not an accomplishment the four-time world champion is willing to give up on just yet – can he work his magic again in Assen?

While Rea may be King of the Cathedral, the uncrowned hero dresses in blue. Michael van der Mark (Pata Yamaha WorldSBK Team) tested the champion’s limits last year and brought his home crowd into a frenzy with two podium positions. While the home hero is yet to taste rostrum glory this season, this homecoming is slightly different from the others: Van der Mark returns as a better and bolder rider, and perhaps most importantly, as a proven race-winner. The crowd’s enthusiasm will reach a fever pitch when his YZF-R1 hits the tarmac.

His companion in the other side of the garage may not enjoy the same fanfare around the province of Drenthe, but his determination this season will more than make up for it. Alex Lowes (Pata Yamaha WorldSBK Team) has finished inside the top five in every single race this year and his maiden WorldSBK podiums (second in 2012) and pole position (2018) both happened at the TT Circuit.

Speaking of top-five finishes, Tom Sykes (BMW Motorrad WorldSBK Team) got his first two of the campaign in Spain and is looking more comfortable by the day on the S1000 RR. The 2013 World Champion’s last race win happened at the Cathedral last year, the sole shining light in a frustrating year for the Yorkshireman. He will, as always, be more than willing to throw his name into the fight again this season.

The Aragon Round was the first time we have seen both factory Honda riders finish both full-length races inside the points this year. While the pairing of Leon Camier and Ryuichi Kiyonari (Moriwaki Althea Honda Team) will have higher aspirations for the season, the signs are becoming more positive by the day. Further steps will be taken at Assen.

The fight for the Independent Riders title also heated up exponentially at the Aragon Round. After two rounds led with authority by the GRT Yamaha pairing of Marco Melandri and Sandro Cortese, two different riders stepped up to the plate in Spain: Eugene Laverty (Team Goeleven) and Jordi Torres (Team Pedercini Racing). The stakes will be raised even higher in the Netherlands.

The World Superbike machines will hit the tarmac once more at the TT Circuit Assen for Free Practice 1 on Friday morning, with the first racing of the weekend starting at 14:00 LT (GMT+2) the very next day. Two races will raise the heat on Sunday 14th: the Tissot Superpole Race at 11:00, and then Race 2 at 14:00.