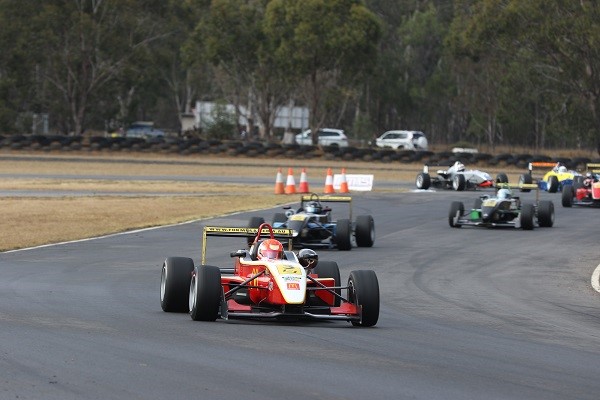 Some of the nation’s fastest open-wheel race cars highlight the categories on the program for the opening round of the 2019 Australian Motor Racing Series (AMRS) at Winton Motor Raceway this weekend.

The Australian Formula 3 Premier Series has a history of providing a springboard for young, aspiring drivers to prominence on the national or international stage, with competitors such as Supercar driver Michael Caruso, former Formula 1 racer Rio Haryanto and World Endurance Championship competitor (and protégé of Mark Webber) Mitch Evans spending time in the category en route to stardom.

An F3 car also holds the honour of being the fastest-ever machine to complete a lap around the nation’s action track, Chris Anthony setting the outright record with a scorching 1:14.3401 in 2016. If the conditions are favourable, drivers are predicting the record could be given a nudge this weekend.

This weekend, the main contenders for victory will be Queensland mango farmer John Magro, who has wealth of experience in an F3 car, and Josh Buchan, who steps up from the NSW Formula Ford Championship. Also among the front-runners will be Toyota 86 Series competitor Richard Peasey, who is back for his second F3 start after an appearance at Morgan Park last year.

While they may not be as fast as the F3 machines, the Mazda RX8 Cup produced entertainment aplenty during its inaugural season last year, and the cost-effective class has experienced strong growth since its inception. 22 cars will be on the grid this weekend, headlined by defending champion Ric Shaw and his main rivals from last year, including Stephen McLaine, Will Harris and Aaron Prosser.

A new category on the AMRS program is the Thunder Sports series, which brings together an array of fast, loud and exciting tin-top race cars, some of which have competed in the Victorian TT series or Sports Sedans.

Following their battle in Extreme TT last year, Nissan Silvia drivers Cory Gillet and Peter Ryder can be expected to challenge for race wins in Thunder Sports, while the rest of the field consists of an assortment of Subaru WRXs, modified Mazdas, Aussie V8 Holdens and Fords, a Nissan GTR and even a Toyota Celica GT4, setting up a highly diverse array of race cars.

Fans of Aussie machinery will also be served by the combined Group 4/Super 6 and Aussie Racing Utes category, which features a mixture of six cylinder and V8 Holden and Ford machinery. Brent Edwards returns to the fray in his BA Falcon, after dominating the Super 6 class last year, while experienced racers Peter Dane and Gavin Ross are also entered, Ross driving his V8 Holden.

The BMW E30 Series has been a mainstay of the Victorian racing scene for over a decade, and last year’s title contest was a thriller, which came down to the wire. The runner-up, Brian Bourke, will be out to make amends after losing the title by just one point to Chris Bell.

The IROC Challenge was another category to produce a close title contest in 2018, Sven Burchartz and Greg Keene sharing race wins over the course of the year. This weekend, Keene vacates his car in favour of his wife Amanda Sparks, while Lachlan Harburg and Terry Knight will also be contenders for race wins.

The AMRS Round 1 program is rounded out by Circuit Excels and regularity, with spectator entry free for the weekend.