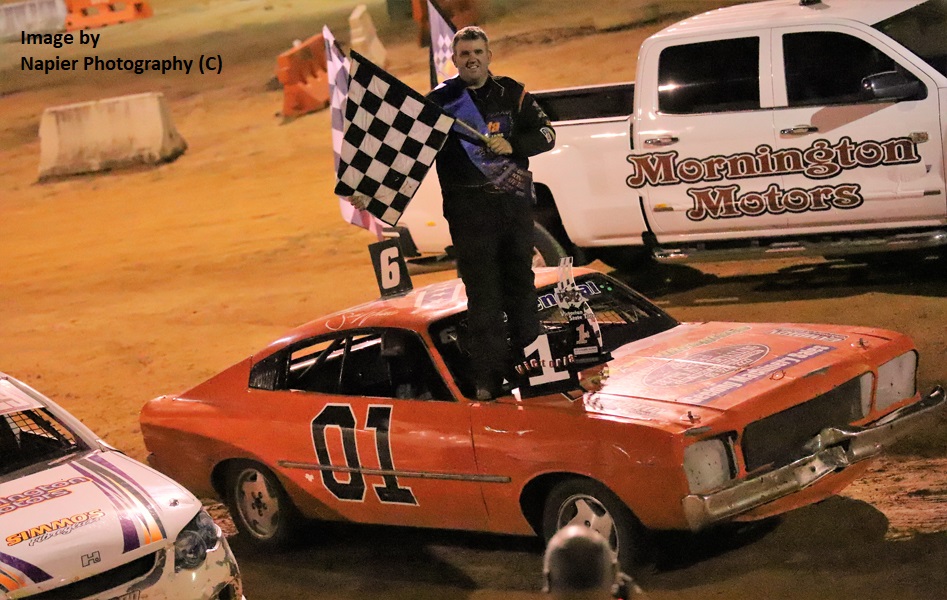 Nyora Raceway held a huge two day weekend extravaganza on Labour Day weekend with the annual Victorian Speedway Council Standard Saloon title being held with fifty competitors doing battle to take the prized number one plate, in the end it would be Geelong racer Scott Whittle who would win from Marcus Reddecliffe a Nyora member and Aaron Marshall, Nick Christie with Andrew O’Connell in fifth place.

After winning the race and on the back of recent fires in the area, Whittle approached the race announcer and advised he would be giving his prize money to the Bunyip Bushfire Appeal much to the applause and appreciation of the crowd, some of whom shed tears in the crowd having been affected by the fires that are ongoing.

In an amazing race and a true testament to the terrific driving of the competitors only three cars failed to finish the race all due to mechanical incidents rather than race incidents, Carvill, Hill and Ardley.

The first move of the race came on lap four when Marshall moved ahead of Christie before they swapped around again briefly from lap nineteen. At this stage Paul Domburg from seventeenth starting place was in eighth spot and by lap twenty six Marshall was back in front of Christie for third place.

Whittle was carving his way in and out and under and over the back markers in the field whilst Andrew O’Connell who started deep down in fourteenth place was now running eighth with Paul Domburg in sixth just behind his brother Matt at this stage of the race.

Reddecliffe led the second to fourth place trio and fair distance behind Whittle and at lap thirty five Whittle crossed the line to win his championship almost five seconds in front of Reddecliffe with thirteen of the original twenty starters on the lead lap despite the pace of the race and the lack of stoppages during the race.

Hobson another Nyora long time racer qualified in pole position however lost out big time on the start and everybody chased Andreatta past the start finish line when they made their first circuit with Matt Mills in second and Foster in third. On lap eleven Travis Millar and Ebony Hobson both passed Todd Hobson before a huge race incident on lap twenty four which finished with the race car of Ebony Hobson parked on the nose cone of Foster in between turns three and four changed the positions again.

With five laps to go, Andreatta who had lead every lap so far was still in front of Mills, Foster, Todd Hobson and Loader after Millar pulled infield whilst in fourth place. The race played through to its end with Andreatta taking a popular win given his years of racing at the little bullring. Andreatta set the fastest lap of the night during the final hitting a 15.396 lap at the timing line.

The Speedway Sedans Victoria Juniors Top Stars final was won by Courtney Meakins from Harry Orme and Rhys Meakins whilst the New Stars top three were Kiarna Barton, Jayden Bryant and Linken Paterson all competing in the same terrific final.