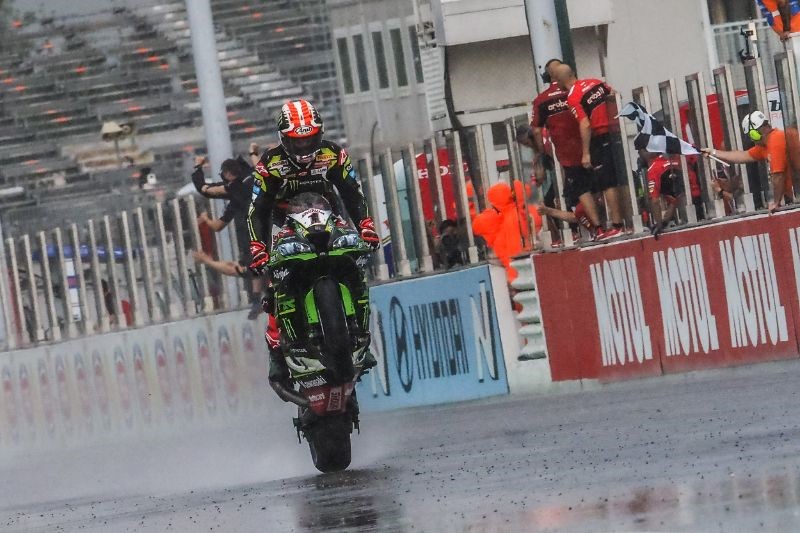 With the rain continuing to fall by the bucket-load, it was a delayed start to WorldSBK Race 1 at Misano, Italy. After a 20-minute delay, racing got underway in treacherous conditions but after just two full laps, the red flag was brought back out as the remain intensified. After the restart, drama unfolded all through the field, but it was Jonathan Rea (Kawasaki Racing Team WorldSBK) who made hay whilst the sun certainly did not shine!

With the race getting underway nearly 25 minutes late, it was a frantic opening few laps before the red flag was waved. Alex Lowes was the race leader ahead of Jonathan Rea, whilst Tom Sykes and Alvaro Bautista (ARUBA.IT Racing – Ducati) were right behind. After the red flag came out, positions for the new restart would be made up by the order of the riders at their most recent timing point.

As the race got underway for a second time for a reduce 18-lap distance, it was another great start for Jonathan Rea, who had the lead ahead of Lowes again, with Sykes third and Chaz Davies up to fourth, ahead of Bautista. Haslam was sixth but one of the biggest improvers was Marco Melandri (GRT Yamaha WorldSBK). Thunder and lightening certainly made the opening laps very frightening, but the WorldSBK warriors continued to battle.

Conditions began to deteriorate and soon, riders began to drop back accordingly, with some eventually dropping out. Lowes began to close on rival Rea and at Turn 8 with 12 laps left to go. Behind the leading duo, it was Loris Baz who had got himself up into seventh place and was now beginning to close down Alvaro Bautista. One lap later, it was Bautista’s teammate Chaz Davies who went head-to-head with Leon Haslam.

However, with ten laps left to run, it was drama out front at Turn 12, as Alex Lowes crashed out of the lead to complete a miserable set of races for the Pata Yamaha WorldSBK Team rider. Now, it was Jonathan Rea who had the lead back. Behind Rea, Michele Pirro (BARNI Racing Team) crashed at the same corner. Tom Sykes was now second, and Leon Haslam was third, with Davies and Bautista behind.

It was drama with nine laps to go, with Michael Ruben Rinaldi (BARNI Racing Team) crashing at Turn 13, completing a wretched day for the BARNI outfit. Then at Turn 8, more spills, this time with Leon Haslam at Turn 8. The British rider remounted but retired with too much damage done. Chaz Davies was now third, but a small error allowed Bautista through, whilst Loris Baz was now fifth and Alessandro Delbianco (Althea Mie Racing Team) in sixth!

A small error from Davies allowed Bautista through into third, whilst Baz eventually closed down Davies to get fourth and then, the Frenchman hunted down Bautista, albeit not being able to close him down enough to pass. The battle for sixth was raging, as Delbianco came under pressure from Melandri, with the veteran Italian getting ahead of his rookie compatriot on the front straight. Delbianco was then swallowed up at Turn 8, as Toprak Razgatlioglu (Turkish Puccetti Racing), Sandro Cortese (GRT Yamaha WorldSBK) and Yuki Takahashi (Moriwaki Althea Honda Team) moved ahead.

Out front, it was Rea who took the win, his 74th win and 10 years and one day after his first at the same track. Tom Sykes gave BMW their first podium since 2013 at Jerez and Alvaro Bautista salvaged a podium after an eventful first wet race. Loris Baz (Ten Kate Racing – Yamaha) took the fourth place and was top Yamaha, ahead of Chaz Davies in fifth.

Marco Melandri held on to sixth place from 13th on the grid, whilst Toprak Razgatlioglu suffered a huge crash in the final sector of the last lap. Cortese picked up seventh ahead of Yuki Takahashi, Lorenzo Zanetti (Team Goeleven) and Leandro Mercado (Orelac Racing VerdNatura) – the Argentine picking up his first top ten in almost a year. Delbianco was a career-best 11th at the flag.

The championship gap is now down to 32 points as Jonathan Rea continues to make gains on Bautista. Tom Sykes, Chaz Davies and Marco Melandri were beneficiaries of Haslam’s crash, as they all close him down – Sykes moving up to eighth overall.

“Today was so difficult to understand exactly the grip level. So I set my own rhythm at the beginning, which was pretty good, and Alex came past and he was on a different level! I wasn’t prepared to push that much to stay there but he was really unfortunate cause he went down and he was incredible at the beginning. That gave me the gap to the rest and I see my pit board and understood that I could minimize the risks and keep the lap time constant till the end. I am super happy and I want to thanks Kawasaki and all my team, our fans and all the people that were here today”.

“Very happy! It is just credit to all the guys of the BMW Motorrad WorldSBK Team. We worked really hard and finally, we got the result which I feel we deserved! It has been a long time and a fantastic feeling to enjoy riding again in wet conditions. The bike is giving some fantastic feelings back today and what the best place to do it than here in Misano with these fantastic fans. We will try to keep that momentum together and try to get the result tomorrow. Thanks to all and we will try again.

“Conditions today were really tricky. After lining up on the grid we had to pull back into the garages, then we restarted and stopped again and keeping the concentration was difficult. It was my first race under the rain so I had a lot to understand. I used a lot of caution at the beginning and tried to understand the track conditions because there were times it was raining a lot and there was more water on track. Lap after lap I build up my confidence with the bike and the asphalt. I am happy because it was important to get some points and getting on the podium was really a good result for us today”.