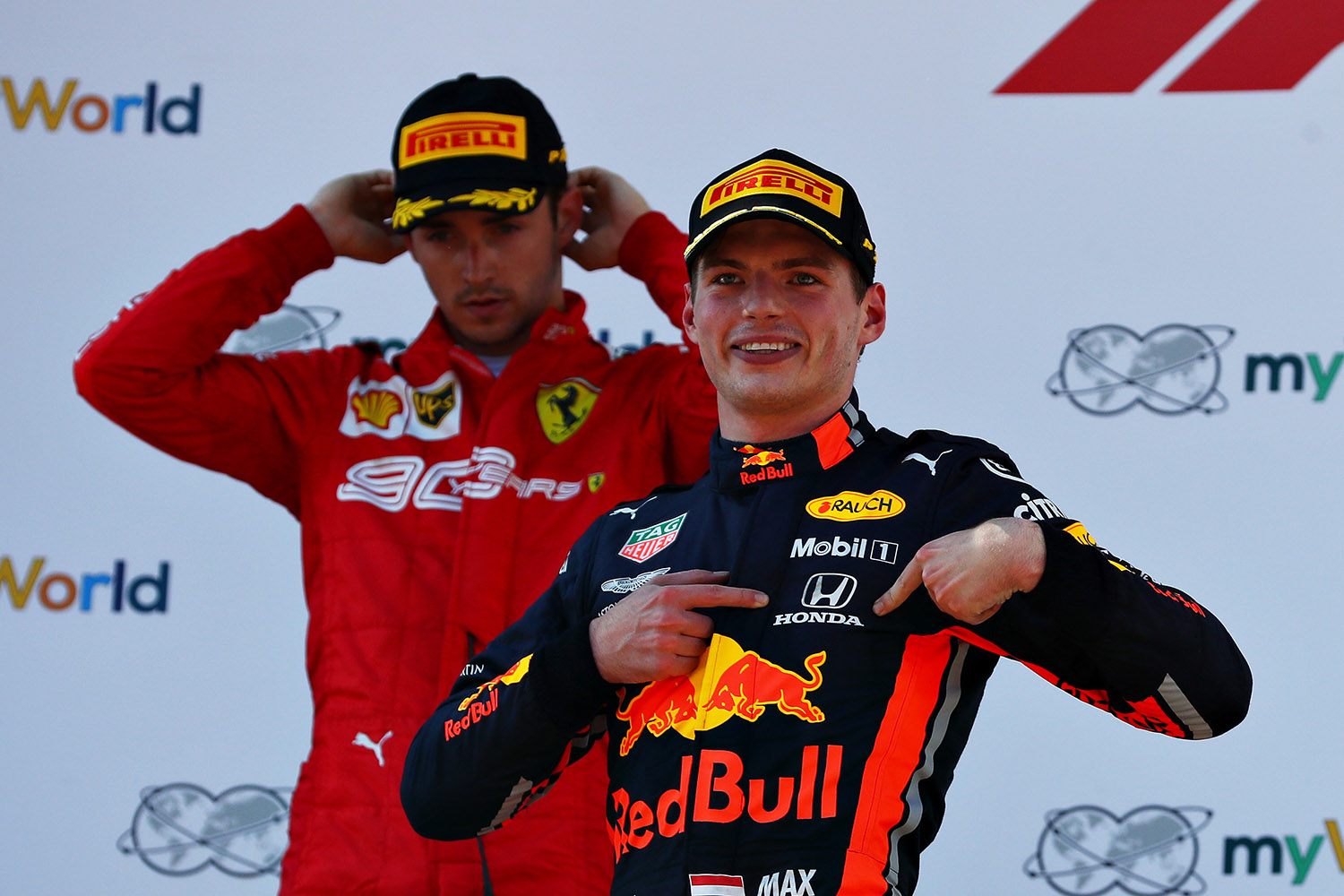 Charles Leclerc was denied his first F1 race win for the second time in Austria. After the frustration of a mechanical issue in Bahrain, Leclerc and his Ferrari team were left incensed by a controversial move by Max Verstappen during the final laps of the Grand Prix which forced the Ferrari off track and resigned Leclerc to second.

Race stewards later deliberated over the move, and eventually decided that no further action was required. The decision gave the Dutchman his sixth win of his career, and the first for a non-Mercedes runner in 2019. It also ensured Honda’s first victory since 2006. Valtteri Bottas finished third on the road for Mercedes, while a late overtake on Lewis Hamilton saw Sebastian Vettel finish fourth after a two-stop strategy. Lewis Hamilton’s 5th place was the first time he’s finished outside the top two this year.

Behind Hamilton, Lando Norris was a fantastic sixth for McLaren, holding off the Red Bull of Pierre Gasly, while Carlos Sainz, having started at the back of the grid, was eighth, ahead of the two Alfa Romeos of Kimi Raikkonen and Antonio Giovinazzi, the Italian scoring his first ever F1 point.

By Lap 20 it was Leclerc from Bottas from Hamilton from Vettel from Verstappen. Two laps later, Bottas was brought in by Mercedes, with Ferrari covering off their rivals by calling in Vettel. But as the German pulled in, there was panic in the Ferrari pit as a radio communication issue meant the mechanics were not out of the garage with the tyres as their driver sat stationary in his box – one of those mechanics then very lucky to avoid being hit by Bottas as the Finn powered out of his pit box behind. Vettel got away after a 6.6 second stop (3 times the norm), emerging in P8 to Bottas’ P4 – and he had it all to do again to get back up to the front.

Leclerc had a much slicker stop a lap later, emerging P3 as Hamilton led. But all was not well in the #44 Mercedes, with Hamilton reporting front wing damage that was causing his lap times to drop off dramatically. A worried Mercedes decided to combine his Lap 31 pit stop with a front wing change. Once the front-runners had all pitted the order was Leclerc, Bottas, Vettel, Verstappen and Hamilton, with Carlos Sainz and Daniel Ricciardo yet to stop in P6 and P7.

Verstappen was the man on the move was. Despite the power advantage of the Ferrari, the Dutchman saw off Vettel for P3 on Lap 50, to the delight of the massive Dutch contingent at the Red Bull Ring – with Ferrari then reacting by bringing Vettel in for a second stop for soft tyres, dropping him to fifth behind Hamilton – while on Lap 56, Verstappen overcame an exhaust sensor scare to pass Bottas for second on the run up to Turn 3.

By Lap 68, Verstappen had caught Leclerc and was moved up the inside of the Ferrari into Turn 3. He was past and into the lead, but Leclerc fought back brilliantly around the outside of the corner to retake the place before the drivers reached Turn 4. The writing however, was on the wall for Leclerc, and when they approached the same corner a lap later, Verstappen moved decisively to the inside. As the pair teetered around the apex, they banged tyres, with Leclerc forced off into the run-off area – but the place was Verstappen’s.

A disgruntled Leclerc was thus left to come home second, having been so close to taking his first victory after driving brilliantly all weekend. A late move around Turn 4 saw Vettel take Hamilton for P4, justifying Ferrari’s decision to attempt a two-stopper. That meant that, having won every race so far this year, the Mercedes runners could only finish third and fifth, with Hamilton failing to win for the first time in five races.

Behind, it was a fantastic day for McLaren, Lando Norris finishing sixth while Carlos Sainz drove brilliantly to come home in P8 after his back-of-the-grid start.

“Wow! After that start I thought the race was over but we just kept pushing hard, I was quite quick so the pace was actually not too bad but I had quite a bad flat spot on my first tyre, and then after the pit stop we were flying,” said Max Verstappen.

“Of course extremely happy for the whole team and also for Honda. We just started working together this year but to win here is incredible.”

Ferrari boss Mattia Binotto said letting Verstappen off the hook was “wrong” but didn’t want to dwell too much on the dramatic episode.“What’s Ferrari’s opinion and position? We still believe this is a wrong decision, that’s our own opinion, we believe that Charles left the entire space, he had no fault, a collision has happened and he has been pushed and forced off the track,” Binotto said.“We believe these are clear rules, which we may appreciate or not, and these are exactly the same rules which have been applied in past races.“Having said that, we respectfully accept the decision of the stewards, they are the judge and we need to respect that, and more than that I think that as a Ferrari fan – and I’m an ultimate Ferrari fan – I think it’s time for F1 to turn the page and to look ahead.“As we often said, we should leave the drivers free to battle. We may not be happy of the decision, we are not supporting the decision but somehow we understand the fact that we need to move forward, and overall I think that’s good for the sport and good for F1.”

“Red Bull was very quick today, very good at keeping the tyres better than us. (I’d have no issues) if I feel that the overtake was done rightly – I don’t think the second one was,” Leclerc told reporters.“I believe that anyway the end will have probably been the same but it’s just not the way you overtake, I think.“I did not expect any contact.”

Speaking to Sky Sports immediately after the controversial finish, Leclerc added: “I’m angry. Obviously, feeling it from the inside, I didn’t feel like it was a fair move.

Next up for F1 is the British Grand Prix at Silverstone in two weeks time.

Velocity Motorsport Magazine covers every Formula 1 event online but also in depth in our glossy magazine, you can subscribe here for our 6 issues per year.