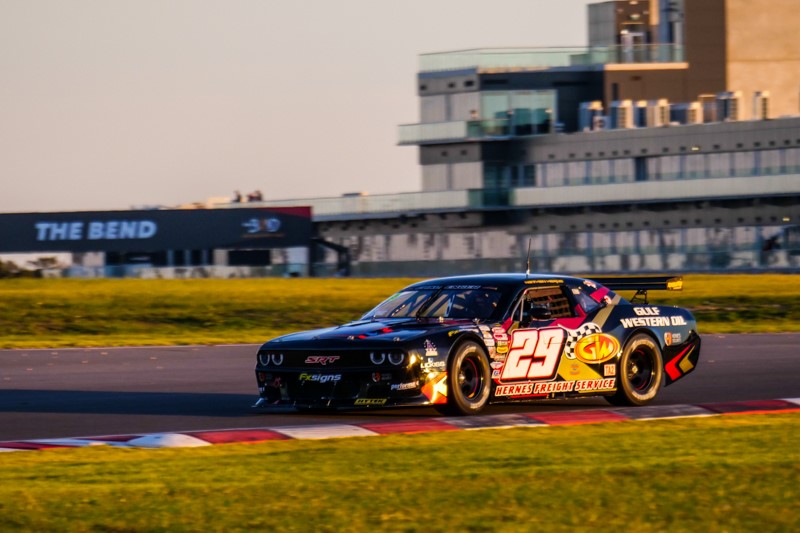 16 year old Nathan Herne has gone back-to-back in the opening two races of the TA2 Muscle Car Series at The Bend Motorsport Park.

Mark Crutcher brought out the safety car on Lap 2 in Race 1 after he ran off the track with a diff failure. As the safety car was called and the field bunched, Russell Wright ran up the back of Kubota Racing’s Hugh McAlister on the main straight, but both cars continued without damage.

Wright was involved in another incident when he turned around Dream Racing Australia’s George Elliot at Turn 16 on Lap 6, and was later penalised five positions for the contact.

Darren Berry’s Camaro failed to take the start of Race 2 with a clutch issue.

As the field negotiated the first complex of corners in Race 2, Andrew Miedecke spun at Turn 3 after dicing with Ashley Jarvis for fourth. He charged back through the field to finish eighth.

Jarvis passed Seton for third at Turn 1, before Seton took back the position and came home in third.

Starting from the rear of the grid after a DNF in Race 1, Kubota Racing’s Matthew MacKelden climbed 13 spots to 11th, while Russell Wright passed ten cars to finish in 16th.

Series debutant Michael Coulter finished strongly in seventh, while Warren Trewin spun at Turn 4 on Lap 6 of the second race and finished in the gravel.

The TA2 Muscle Car Series returns for Races 3 and 4 at 9:30am and 1:05pm on Sunday, available to be streamed live online courtesy of the Australian Motor Racing Series.

“I’m really happy to bring home a strong result for the Gulf Western Oils team at The Bend today ahead of some extremely tough competition in George Miedecke and Aaron Seton,” said Herne.

“The car’s really good off the corners here, I’m able to put the power down nicely but we’re still struggling slightly under brakes so the team and I have got some work to do overnight.

“The racing in the TA2 Muscle Car Series is really intense, every race is getting more aggressive, but at the same time we’re trying to conserve our tyres as much as we can so we can fight again on Sunday.”