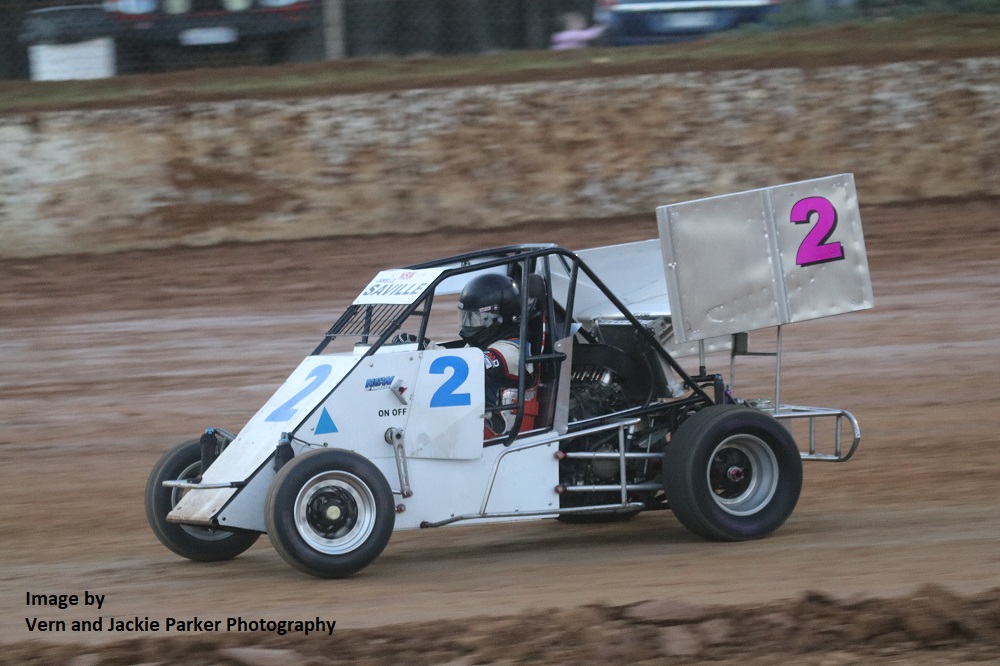 Rushworth Speedway on Saturday night was the host venue for the season ending Ironbark Classic for Grand Prix Midgets in Victoria with rain playing into the hands of some and not others. Janelle Saville from Goulburn in New South Wales was the top point scorer after four heat races and declared the event winner, whilst Chris Fowler from Geelong was crowned the Ballistic Performance Parts Masters Series winner having done enough to hold the lead after the heat races were finished.

Speedway legend of Compact Speedcars and Grand Prix Midgets Danny Stainer retired from racing on this night and had hoped to come away with the win, it was not to be as Stainer will be forever remembered for his racing achievements with multiple national and state title victories.

The first of the four heat races lined-up with Troy Buis on pole and Stainer alongside then Steve Bennett, Trevor Perry, Travis Florrimell, Gary Bowyer, Chris Fowler (# 13 Ballistics Performance Parts– Yamaha R1), Sean Denning and Janelle Saville. Stainer got a terrific start as did Florrimell who moved from fifth to second on lap one knowing he had to finish as far ahead of Fowler in every race they competed against each other and then have a stronger finish in any race Fowler was not a participant.

Fowler moved to third on this first lap with Perry, Bowyer, Bennett, Denning (#52 Truck Moves – Yamaha R1) and Saville behind him. Fowler moved to second and ahead of Florrimell on lap two. The last three laps produced plenty of changes to the line-up.

On lap eight Fowler and Perry (#55 Perry Bros Chassis – Suzuki GSXR 1000) had contact and it was Fowler who got up into the loose top of the track, hitting the wall and breaking a rod end on the rear axle who was eliminated from the race. Florrimell (#81 TM Lineboring & Engineering – Suzuki GSXR 1000) spun at the same and was deemed to have been the cause of the stoppage as that is the direction stewards were watching, then a lap later Denning spun. In the end Stainer took the win from Perry, Saville (#NSW2 SS Racing – Suzuki GSX 1100), Bowyer, Bennett, Florrimell and Denning. Buis was a non-finisher with a broken torsion arm.

In the second heat, Saville would line up beside Denning, Fowler, Chalcraft, Blackeby, David Bacon (#36 DB Cleaning & Kanga Hire – Yamaha R1), Bowyer, Perry and Florrimell, Blackeby spun and went back to the rear of the field whilst Saville got ahead with a great start whilst Fowler moved into the second spot ahead of Florrimell. The lead three kept Perry at bay who was in fourth place until lap seven when he got past Florrimell.

Blackeby was slated for a pole position start in heat three with Bacon, Chalcraft (#15 Jacobsons Transport – Suzuki GSX 1100), Denning, Saville, Fowler, Stainer, Bennett and Buis making up the starters. Blackeby who was in his own B Grade points battle with Denning got a good jump and the lead for lap one with Saville and Fowler behind.

Stainer (#51 R & P Stainer Grinding – R1 Yamaha) rounded up Fowler on lap two and on lap three Saville, Stainer and Fowler all passed Blackeby to move into the top three spots. On lap four the spring broke on Fowlers racecar that supports the chain tensioner and Blackeby moved back to third as over the next couple of laps Bennett (#NSW 79 SR Bennett Haulage – Honda CBR 1000) and Chalcraft moved in front of Fowler as he circulated around trying desperately to secure finishing points. Saville collected her second win with Stainer in second, then Blackeby, Bennett, Chalcraft, Denning and Fowler.

The last of the four heat races began with a lot on the line, and with series challenger Florrimell in pole position with Bowyer alongside. Perry and Bennett started on row two and local racers Buis, Stainer, Chalcraft and Blackeby followed them.

Everything was at stake for Florrimell still trying to secure enough points to lead Fowler before the final began. With Perry and Stainer in the race, it was not going to be an easy race for Florrimell.

As if there was $10,000 on the line everything happened early on with Florrimell and Bowyer coming together in turn one on lap one as Florrimell bicycled and nearly ended upside down. The field behind had nowhere to go and Chalcraft destroyed the front end of her racecar whilst Perry suffered some damage however was able to re-start after infield officials gave him the all clear.

At the re-start, Florrimell lead at the stewards dais first time around on lap one with Perry, Bowyer, Stainer, Blackeby, Buis and Bennett trailing behind.

Stainer crept to third by lap two and on the third lap Florrimell found himself shuffled back to fourth as Perry took the lead, Stainer to second and Bowyer (#NSW 5 Arjan Motors – Yamaha R1) to third. The ten lap heat race ran from there with Perry at the front taking the win from Stainer, Bowyer, Florrimell, Blackeby, Bennett and Buis (#5 S & H Pearson Mobile Butchers – Yamaha R1).

The track was smooth all night however a little hard and black for the little open wheel cars making it difficult to find drive.

Rain then came down and Rushworth staff declared the race meeting over with Saville taking the night’s trophy on points after the four heat rounds from Stainer and Perry.

With the Ballistic Performance Parts now over the final points tally finished with Fowler a four point winner ahead of Florrimell, Jason Crawford finished third then Sean Denning and Danny Stainer rounded out the top five.

In the AJ’s Motorcycle Parts and Apparel B Grade Championship Denning secured the win ahead of Mark Blackeby comfortably whilst Buis finished in third place.