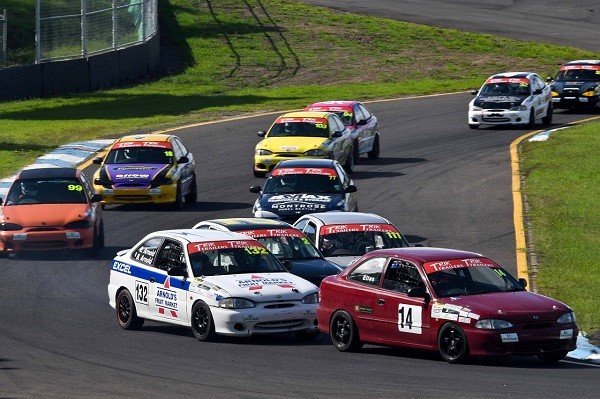 The 2020 Australian Motor Racing Series (AMRS) will conclude at Sandown Raceway this weekend, with a large contingent of local competitors joined by some interstate visitors itching for their first laps at the historic Melbourne circuit.

The enthusiasm among Victorian racers to return to the track after many months on the sidelines is most apparent in the Excel Series, which has attracted a mammoth 54 car field for its one-hour endurance race on Sunday.

While regular Excel front-runners such as Nathan Blight, Adam Bywater and Daniel Webster have all entered, some high-profile drivers will also take part in the event, including former Super2 Champion Adam Macrow, sons of legends Ben Grice and Ben Bargwanna and acclaimed sim racer Ethan Grigg-Gault.

The 2020 Australian Formula Ford Championship may have been cancelled, but owners of vehicles powered by the venerable Kent engine will hit the track for five exhibition races this weekend. One driver who could not resist the temptation to drag his historic Formula Ford into the action is Richard Davison, father of Will and Alex. Meanwhile, Supercars racer Tim Blanchard has also entered alongside his father John and brother Harrison.

Davison and the Blanchards will be joined on the grid by some familiar names from the classic FFord scene, such as Andy Nethercote, Jonathan Miles, Andrew McInnes and Dean Koutsoumidis.

Victorian-based competitors in the Promaxx Exhausts TA2 Muscle Car Series have been granted their first chance to hit the track since the Winton round in March; drivers such as Graham Smith and Warren Trewin are taking advantage of the opportunity but the round has attracted some interstate visitors as well, including Sydney driver Michael Coulter.

Victoria has been starved of historic events in 2020, so it is little surprise to see a field of eager competitors entered in the Group S historic production sports races. Sandown’s long straights will suit the high-horsepower vehicles such as the De Tomasos of Ross Jackson and Perry Spiridis and Joe Di Bartolo’s Corvette, but the Porsche 911s of James Calvert-Jones and Andrew Whiteside should also be competitive.

Other cars entered in Group S include some Alfa Romeos, a Datsun 240Z and even an Alpine Renault A110, to be driven by Ernst Luthi.

The MGB V8s of Phil Chester, Michael Wood and Ben Muller can be expected to run at the front of the MG and Invited British Sports Cars field; interestingly, this category has attracted no less than five Triumphs, including a couple of TR7 V8s and a couple of Stags, driven by Alana and Keith Ondarchie. There is also a 1971 Ford Escort, entered by Peter Owen.

Rounding out this weekend’s program will be the AMRS Invited Race Cars. As the name suggests, this category is open to a wide range of tin tops and has attracted a diverse assortment of vehicles including Stock Cars, Thunder Sports cars, Improved Production vehicles, Sports Sedans, Production Cars and even an HQ Holden.

The fastest cars in the field are most likely to be the Stock Cars, with Stephen Chilby (racing at Sandown for the first time) aiming to continue his winning streak aboard his Chevrolet Silverado Oz Truck.

Spectator Admission
Spectators will be allowed to attend Sandown on Sunday; viewing will be exclusively from the Red Hill Carpark area.

Admission is $25 for adults, with children under 16 free; tickets must be purchased prior to the event online HERE.

All attending spectators are advised to bring their own food and drink (alcohol not permitted).