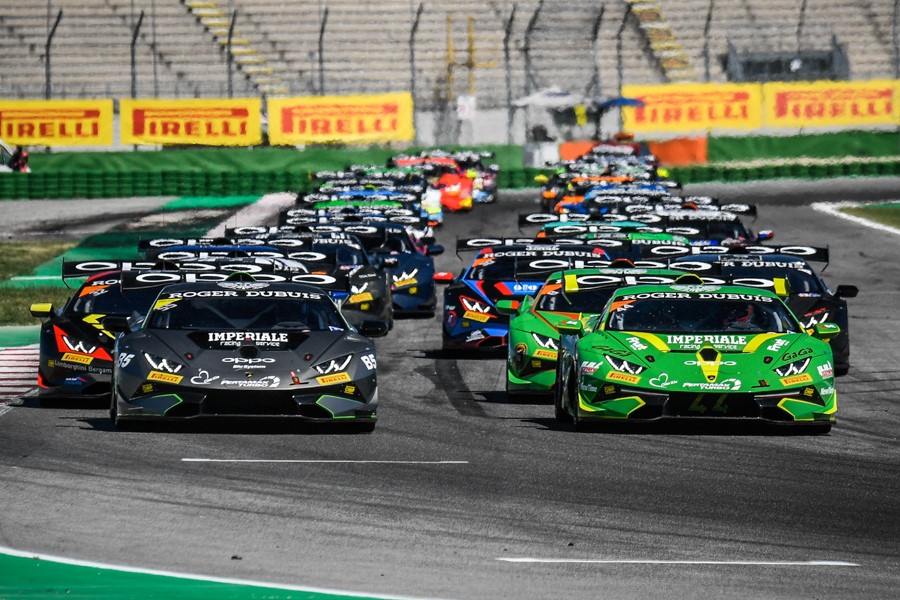 Vito Postiglione survived a late charge from Imperiale Racing team-mate Karol Basz to win a breathless second Super Trofeo Europe race of the weekend at Misano and claim maximum championship points. After topping second qualifying, it was the Pro-Am combination of Loris Spinelli and Piero Necchi (Imperiale Racing) who lined up on pole position, with Spinelli racing out to a healthy lead at the start of the race. Race 1 winners Postiglione and co-driver Kikko Galbiati did not get the best of starts and dropped behind the Bonaldi Motorsport Huracán Evo of Stuart Middleton at the first corner.
Galbiati, however, made inroads after settling into his opening stint and re-took second place from Middleton round the first sector of the Misano track before reducing the deficit to Spinelli out front. The third Imperiale Racing Huracán of Bartosz Paziewski spent the first part of the race stuck behind Middleton and just ahead of the Target Racing machine of Jonathan Cecotto in fourth place.
Paziewski then lost that position to Cecotto following a safety car intervention for debris, when the Venezuelan went all the way around the outside of Turn 1 to seize the place. Galbiati was the first to make his mandatory pit-stop as the window opened and the Italian was followed in by the Bonaldi Motorsport car of Sergei Afanasiev. Paziewski also came in behind.
Once the window closed, it was Postiglione who assumed the lead, ahead of Basz who began to close the gap to the leader with each passing lap. While Postiglione was still posting fast lap-times Basz was clawing his way back into contention in the #8 Imperiale Racing machine.
That gap was reduced from just over three seconds to a little under half a second as the pair entered the final two laps. Basz got better drive out of the slow Turn 10 and ran alongside Postiglione on the run down to the fast kinks, briefly taking the lead. But Postiglione held on just enough to maintain his advantage and staved off a final corner lunge from his Polish team-mate to claim his and Galbiati’s third straight victory of the season.
Behind Galbiati, Dutchman Danny Kroes and Afanasiev claimed the final step of the podium, beating Spinelli and Necchi, who won the Pro-Am class in fourth.
Niels Lagrange and Anthony Lambert finished fifth for Leipert Motorsport, ahead of the Konrad Motorsport pairing of Vincent Schwartz and Axcil Jeffries. Middleton and Jack Bartholomew finished seventh, with Shota Abkhazava and Harald Schlegelmilch ending up second in Pro-Am.
Am class honours went the way of Mikko Eskelinen and Jake Rattenbury in the #3 Leipert Motorsport car, beating the solo entry of Nicolas Gomar. Joseph Collato topped the Lamborghini Cup class for AGS Events.
Next Lamborghini Super Trofeo Europe round will be held in a fortnight (12, 13, 14 July) at the Zandvoort track.