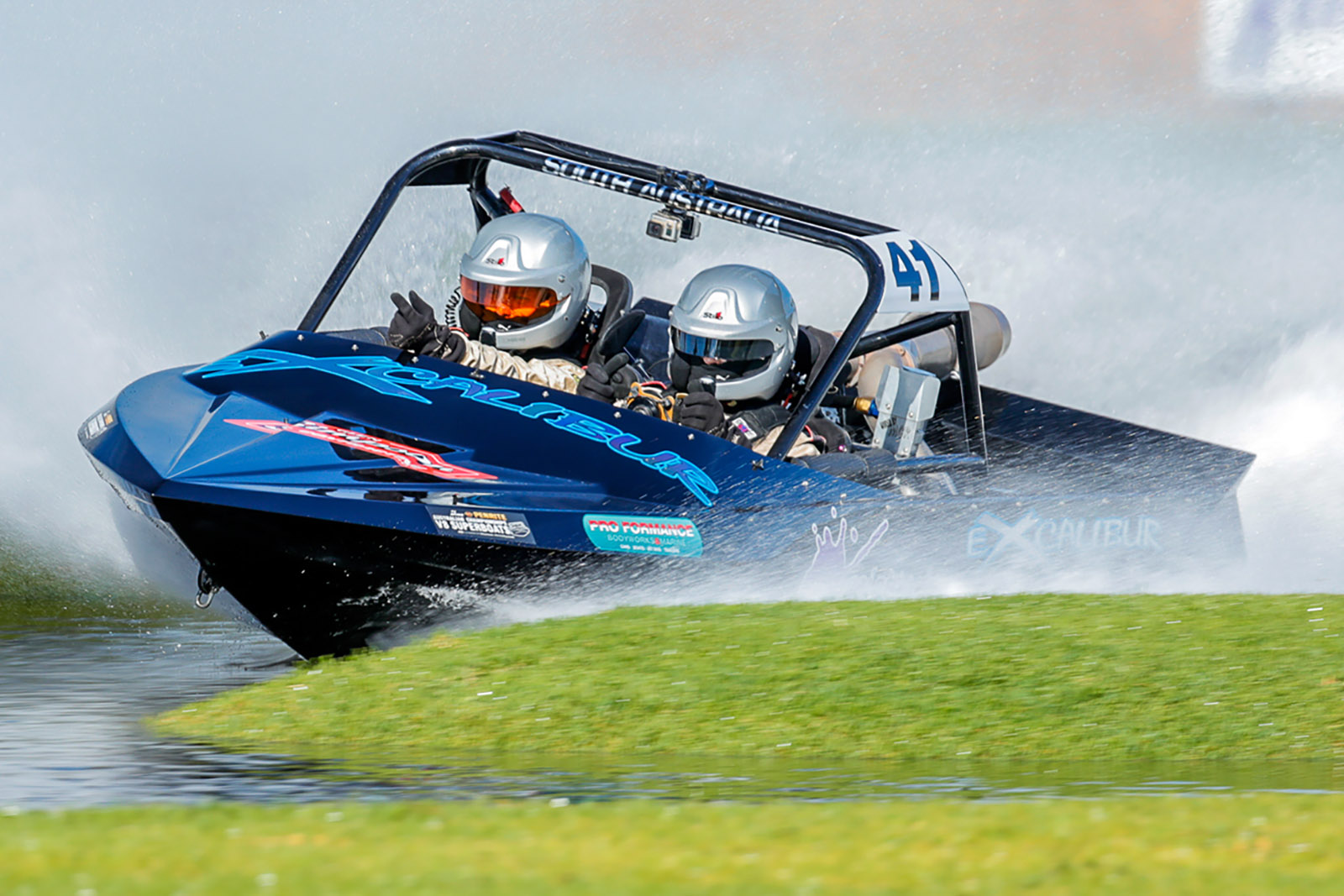 The opening round of the 2019 Penrite V8 Superboat Championship at Keith in South Australia delivered some fantastic racing and some unpredictable results. This weekend the field returns to Kennards Hire Park at Lake Centenary in Temora, the scene of some of the most memorable racing in the history of the sport where the field will do battle under lights across three classes, one of which will see record entries!

Keith’s opening round saw the emergence of former World Champion Slade Stanley as an Unlimited Superboat title contender, the Wagga-local setting the fastest time of the event before a technical issue stalled him at the final hurdle. So too reigning champion Phonsy Mullan, the newly-crowned UIM World Champion running strongly into the final before falling to his own technical challenges, leaving crowd-favourite Mick Carroll to take top honours over Temora local and reigning AUS#1 Scott Krause, although sadly for Krause it wasn’t in his boat..

The opening round of the emerging LS-Class saw just a single entry for Kyle Elphinstone who used the event to prepare for the Temora onslaught where the biggest field in the history of the category will see an impressive entry of seven boats all looking to gain valuable miles in the entry-level category.

With Scott Krause and Phonsy Mullan sharing the 2018 Unlimited title, and the return of two-time Group A world champion Slade Stanley, the 2019 season opener was always expected to be exciting and it delivered in spades. Sadly for Krause he suffered an early setback with his KAOS machine, but thanks to the comradeship within the Superboat field, help was immediately at hand, Michael Cunningham offering Krause an opportunity to share the drive in ‘True Blue’ giving the Temora local a chance to keep his championship hopes alive.

In the end though it was Mick Carroll who prevailed, much to the joy of the local fans, the South Australian taking a debut win as the sole boat owner of ‘Excalibur’ earning himself the coveted red plate for Temora as the championship points leader, although he will be keen to ensure he completes the full compliment of laps this weekend at a circuit where he has had some spectacular offs in past seasons.

After the disappointment of Keith where he fell agonisingly short of yet another win, Phonsy Mullan returns to Temora with another new powerplant, a naturally-aspirated 583-cubic-inch LS Chev engine with which he expects to push his rivals, at a circuit where he has enjoyed a great deal of success in the past – but he will have no shortage of challengers.

One driver looking to make a successful return to Temora is Ted Sygidus, the Victorian returning with his mighty 680-cubic-inch naturally-aspirated big block Chev aiming for a return to the podium after placing second to local hero Scott Krause 12-months ago, he is expected to take the fight to the points leaders, but he will need a flawless run based on the current form of the field.

Another looking to make an impression on the podium is New Zealander Rob Coley – the spectacular ‘Poison Ivy’ team-boss has had mixed fortunes in Australia, but the front-runner in their national series wants to prove why he is regarded as one of the best Jetsprint drivers in the world, especially off the back of what was a challenging World Series assault.

Daryl Hutton will be back with his twin-turbo powerplant in the ‘Phoenix Lubricants’ machine, the expat New Zealander looking forward to further developing the package that showed great promise during the season-ending 2018 UIM World Series, together with the ever-improving Michael Cunningham in ‘True Blue’, the two blue boats could be the ones to watch under lights in Temora.

With Glenn Roberts likely to throw his hat into the ring, Daniel de Voigt improving with every outing and Paul Burgess returning to action after a lengthy sabbatical, there will be no rest for the drivers pushing the top of the timesheets, Keith showing once again that consistency is often the key!

There will also be a great addition to the Unlimited Superboat field too, an all new entry fielding the package that gave local star Scott Krause his debut in the category – Starr Kopa and Matt Foote campaigning the boat under the new guise of ‘Wikid’ with their debut event likely to provide plenty of like-minded experiences..

Season 2018 saw one 400-Class driver dominate at Temora – Victoria’s Jody Ely. His 410ci powered Jetspeed was a sensation at the country-NSW circuit, taking two wins from two starts at Lake Centenary, and the opening round at Keith only further cemented his position as the one to chase this weekend.

He will have no shortage of challengers though, one of which will take the fight to Ely in almost identical equipment, crowd-favourite Justin Roylance having recently taken delivery of the ex-Peter Huijs Jetspeed that proved so successful in Unlimited guise in New Zealand, although it may prove that the bigger threat to Ely three-peating will be Queenslander Paul Kelly who claimed the opening round win in Keith.

Reigning champions Mark Garlick (Grumpy On Edge), Ben Hathaway (Warren & Brown Tools Racing) and Brett Thornton (2Obsessed) will all be out in force looking to maintain their championship positions in what is becoming a very difficult championship to predict.

Like the Unlimited class, there will be no shortage of challengers pushing for a place in the finals. Greg Harriman and Hugh Gilchrist will be sure to push the points leaders, whilst Cabarita locals Phil Weinthal and Peter Monger will share the driving duties in Weinthal’s ‘Black Dog’. Ron O’Day will be back looking for more valuable miles in ‘Agrovation’, and Brendan Doyle returns in ‘The Girlfriend’ making it another solid field of entries for round two.

The big news though is the success of the LS-Class with a record field for Temora. Kyle Elphinstone has been the standout over the last six month, and whilst he was the points leader after Keith, he will have some serious competition this weekend, with seven boats in the V8 Superboats development category, the best news for the future of the sport in some time.

Andrew Medlicott will lead the charge in Justin Roylances former JRE-tuned Stingray, whilst Graham Reynolds returns in ‘Red Rum’ and David Bray in ‘Bear Neccesities’. With Lawrence Howlett (Drop Bear), Robert Westerink (The Contractor) and Rob Johnston (Almost There) in the field, the LS-Class at last gives the fans plenty to cheer about as the next generation of Superboat stars stamps their mark on this incredible sport.

The second round of the 2019 Penrite Australian V8 Superboat Championships will be contested at the Kennards Hire Park at Temora’s Lake Centenary on Saturday 4 May, with opening qualifying at 3:15pm ahead of the finals which will begin under lights from 8:00pm.

The circuit is located at Lake Centenary, 3.0-kilometres north of Temora on Barmedman Road – diagonally opposite Temora Airport. Tickets are available at the gate (EFTPOS available on-site).

For those of you unable to make the event, this weekend a live stream, and a range of interviews and videos will be made available via www.facebook.com/V8Superboats where results and updates will also be posted, but if you live in the area, do yourself a big favour, and drop down to Lake Centenary in Temora to take in some of the action live, you certainly won’t be disappointed!

SEVEN-ROUND SEASON AHEAD FOR PENRITE V8 SUPERBOATS IN 2020