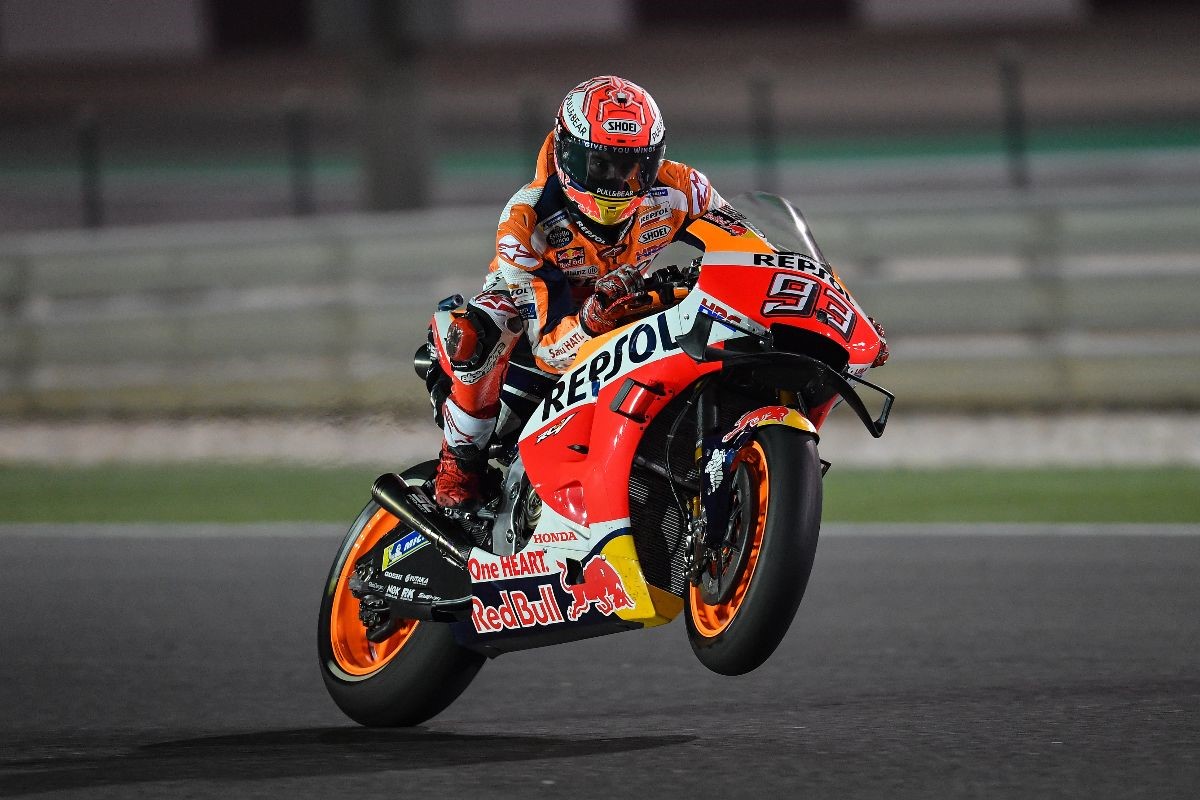 After a long winter break, we look upon testing as the first answers to the questions raised by rider moves, current form and potential that begins to brim in the final races of the season before. But really, it’s more a teaser that whets our appetite ahead of the first Grand Prix of the season and even then, it’s when the lights go out for racing that we really get some answers. So Day 1 in the desert kept us guessing in tantalising style with records broken, mysteries solved and ups and downs for many on the grid – a perfect storm of unpredictability and fierce competition for the VisitQatar Grand Prix.

Marc Marquez (Repsol Honda Team) was undoubtedly the headliner of Act 1, however. The now seven-time World Champion’s new lap record – nearly half a second clear at the top – laid down an early benchmark that puts him squarely in the driving seat but it’s not one-lap pace that’s been in doubt for the Spaniard. Coming back from surgery to his shoulder, longevity and consistency is the question on everyone’s lips. And behind Marquez’ eyebrow-raiser of a 1’53.380, the riders were packed together down the timesheets.

The first of those was Maverick Viñales (Monster Energy Yamaha MotoGP). After a more difficult season at times in 2018, consistency is also a key word for him and the Iwata marque so topping testing and showing some solid pace on Day 1 is a good start. He did have some close company in the form of Jack Miller (Alma Pramac Racing) though – top Independent Team rider on Friday and fastest Ducati – as the Australian ended Friday just 0.054 off the Spaniard.

Next up behind Miller was another Ducati: Mission Winnow Ducati Team newcomer Danilo Petrucci, who was the top Borgo Panigale factory team rider once again – as he was in testing. Teammate and 2018 Qatar winner Andrea Dovizioso was in P6 but not far off, however, and therein came the seemingly solved mystery: the switch seen on the Ducati in testing was spotted in action on Day 1 and it appeared to fit with the rumour mill theory of a holeshot device for race starts. Will we see more on Saturday?

Splitting the two Italian factory machines was another impressive performance from Fabio Quartararo (Petronas Yamaha SRT). The French rookie was the fastest newcomer to the class once again, and threatened the top just like in testing. So that seems one question answered: yes, he can do it again. And his teammate, Franco Morbidelli, had a solid showing on Day 1 too – slotting it just behind ‘DesmoDovi’, pushed down to P7 by just 0.019 despite a crash.

Team Suzuki Ecstar’s Alex Rins, another superstar in testing, was eighth quickest on Friday by another tiny gap of less than half a tenth, just ahead of Aprilia Racing Team Gresini’s Aleix Espargaro. Espargaro, who was well within the top ten at the Qatar Test too, was another answer revealed on Day 1 – it’s a feat that can be repeated during the race weekend. Rookie Joan Mir (Team Suzuki Ecstar) completed the top ten after shooting first in the time attack at the end of FP2, only a tenth off teammate Rins and briefly top before times tumbled.

So who’s missing in the provisional top ten of Q2 qualifiers? First is the still-recovering Jorge Lorenzo (Repsol Honda Team), near the top in the morning, who just got relegated to 11th by Rins’ final fast lap at the end of FP2. And Valentino Rossi (Monster Energy Yamaha MotoGP), the fastest man in the first session just ahead of Lorenzo, ended the day in 17th overall and was just 0.005 ahead of Red Bull KTM Factory Racing’s Pol Espargaro so the two will be pushing to move forward in FP3. Will Rossi deal a faster hand when we head back out on track for more? Will the conditions allow those outside the top ten to improve? Or can those between the ‘Doctor’ and old nemesis Lorenzo – Takaaki Nakagami (LCR Honda Idemitsu), Cal Crutchlow (LCR Honda Castrol), rookie Francesco Bagnaia (Alma Pramac Racing) and Tito Rabat (Reale Avintia Racing) – set us up for a Q1-shootout to remember?

Winning margins used to be minutes, then they became seconds, tenths, hundredths…now it’s thousandths that separate the laptimes for one of the strongest grids ever seen. Day 1 set the stage for a stunning Saturday at Losail International Circuit, so make sure to tune in for qualifying from 20:00 (GMT +3) local time. 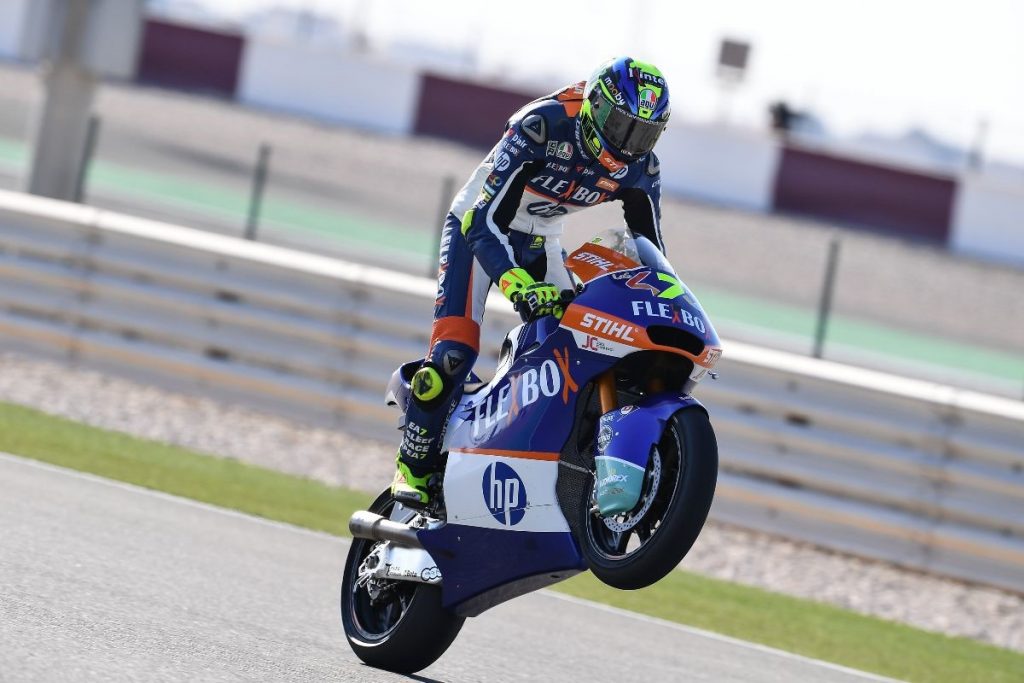 Baldassarri beats Schrötter to the top

Lorenzo Baldassarri (Flexbox HP 40) led the way in an exceptionally tight Moto2™ field on Day 1 of the VisitQatar Grand Prix, with just three quarters of a second separating the top fifteen. The Italian was second in the race last season but of the competitors still in the class, he was the highest finisher – a benchmark in itself, adding to the new lap record set on Friday. At the top he had a little breathing space, however, with an advantage of a quarter of a second over FP1’s fastest man Marcel Schrötter (Dynavolt Intact GP). Remy Gardner (ONEXOX TKKR SAG Team) locked out the top three, only 0.030 in further arrears as the Australian signalled the start of the infinitesimal gaps from there on out.

Fourth place went to Sam Lowes (Federal Oil Gresini Moto2) as he converted impressive race pace in testing to a solid time attack too, with Alex Marquez (EG 0,0 Marc VDS) completing the top five. Jorge Navarro (+Ego Speed Up) took P6 and showed more impressive speed for rider and manufacturer, ahead of a leap up the timesheets from Andrea Locatelli (Italtrans Racing Team). Brad Binder (Red Bull KTM Ajo) was the fastest KTM and made sure the Austrian factory were represented in the top ten, 0.005 off Locatelli, with Xavi Vierge (EG 0,0 Marc VDS) taking P9.

The top ten was completed by rookie Enea Bastianini (Italtrans Racing Team) as the Italian took the honour of fastest debutant on Friday. He was hundredths in front of Augusto Fernandez (Flexbox HP 40), with NTS RW Racing GP’s Bo Bendsneyder in P12 as the Dutchman continued his top form in 2019. Tom Lüthi (Dynavolt Intact GP), returning from the premier class, was 13th despite a crash near the end of the day but remains a provisional Q2 graduate. This weekend the new qualifying format comes in and it’s the fastest 14 after FP3 who’ll go through automatically – so it’s reigning Moto3™ World Champion and Moto2™ rookie Jorge Martin (Red Bull KTM Ajo) currently on course to be the final rider to graduate.

American Racing KTM’s Iker Lecuona crashed in FP1 and was declared fit, returning to the track after a check up to rejoin the action in FP2. Now it’s FP3 time and the final practice session starts at 14:20 (GMT +3) local time on Saturday – tune in to see if there’ll be a shake up before qualifying.