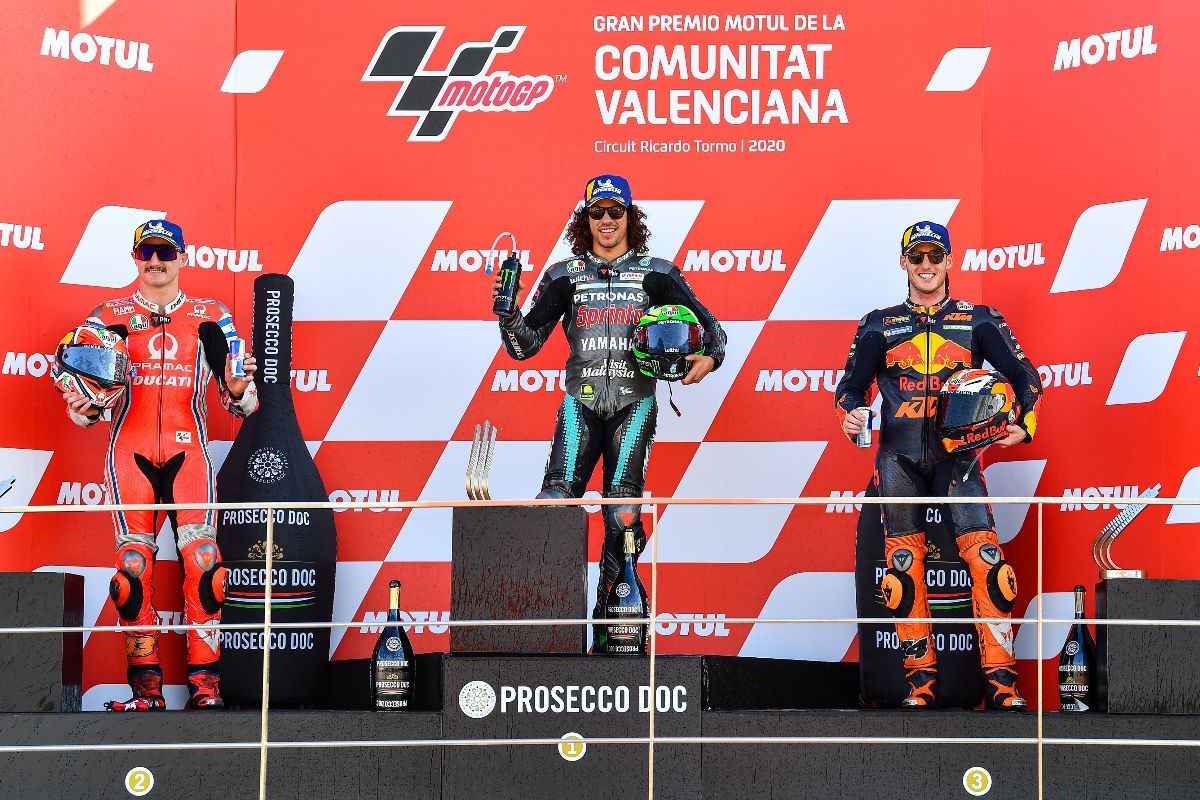 A stunning final lap scrap saw Franco Morbidilli take his third win of the year after fending off Jack Miller, with Joan Mir taking seventh and with it the 2020 World Championship.

Franco Morbidelli (Petronas Yamaha SRT) and Jack Miller (Pramac Racing) put on a spectacular duel in the Gran Premio Motul de la Comunitat Valenciana as a tense race-long chess match turned into a final lap scrap for glory. It was decided by less than a tenth but it’s Morbidelli who comes out on top, gloves off to take his third win of the year and move up to second in the standings. Miller was forced to settle for second in the end, with Pol Espargaro (Red Bull KTM Factory Racing) once again completing the podium. Slightly further back, Joan Mir (Team Suzuki Ecstar) made dreams a reality as he took seventh place and secured the 2020 MotoGP™ World Championship, with key rivals not able to do enough to stop the Majorcan’s history-making charge.

As the lights went out, Miller put in a characteristically good start to take the holeshot before then heading wide out of Turn 1, leaving Morbidelli in the lead as the Yamaha man kept it clean to take over. Pol Espargaro pounced for third ahead of front-row starter Takaaki Nakagami (LCR Honda Idemitsu), but then some shuffles just behind pulled immediate focus.

First, Alex Rins (Team Suzuki Ecstar) had sliced through from P14 on the grid to seventh after a storming start, but things didn’t go so well for fellow contender Fabio Quartararo (Petronas Yamaha SRT). The Frenchman struggled to get it stopped into Turn 6 on Lap 1 and dropped back – right back – before it went from bad to worse. Sadly, his title hopes were over, ‘El Diablo’ sliding out of the race and contention.

Meanwhile at the front, Morbidelli had the hammer down and Rins was up to fifth – one place gained ‘thanks’ to a crash for Johann Zarco (Esponsorama Racing) as the day sadly came to an early end for the Frenchman after a good start and a battle with the number 42. And Mir? Mir was in eighth, but was getting into the groove and past Aleix Espargaro (Aprilia Racing Team Gresini) to set off after Brad Binder (Red Bull KTM Factory Racing) ahead of him.

Morbidelli rode on, Miller remained his shadow, and the two men kept edging away to make it a duel. It became a brief duel over third too as Nakagami homed in on Pol Espargaro, the Japanese rider once again showing some stunning pace. But the charge would end with disappointment as just as he struck, Nakagami slid out – leaving the KTM to take back third and now with a small cushion back to fourth.

The man in fourth by then was Rins, and with Suzuki’s late race pace of late, Pol Espargaro couldn’t afford to relax too much. But this weekend it seemed just off the podium was the maximum the Aragon GP winner could manage as he held station, two more KTMs on his tail. Initially the first was Miguel Oliveira (Red Bull KTM Tech 3), but Red Bull KTM Factory Racing’s Brad Binder was coming in hot. The South African was also keeping Mir at bay as the number 36 failed to make inroads into the gap, seemingly set to take the crown from seventh.

Back at the front, Morbidelli was steadfast but the Petronas Yamaha SRT rider wasn’t getting away as he had done for his previous wins. Miller was with him and gaining, gaining, until he was within touching distance with two to go. And over the line for the final lap, the Australian struck for the front.

Heading up the inside, the number 43 was past and it was game on – but he also headed wide. Morbidelli reacted to hug the apex and slice back through, the Yamaha back ahead and Miller reloading for another shot. That came not long after at Turn 4 as Miller chucked it up the inside, but Morbidelli snapped straight back to grab P1 again at Turn 5.

Down the back straight they went, the Ducati able to show a wheel but no way through. Miller then set himself up for a dive up the inside at Turn 11, but once again there was no way through as the duo got very close for comfort.

Attention then turned to the final corner, but Miller wasn’t close enough to lunge. Could the number 43 get the power down and use the extra grunt to scream past Morbidelli on the run to the line? It was his final chance at the win, but it wasn’t to be. Morbidelli emerged victorious for the third time this season after a magnificent boxing match, and the Italian now sits second in the Championship. Petronas Yamaha SRT are also the top Independent Team. The gap over the line was just 0.093 seconds, tantalisingly close, but it’s a great third podium of the season for Miller nevertheless. Pol Espargaro goes back-to-back in Valencia for his fifth podium of the year in third, another fantastic effort from the Spaniard in his penultimate race for KTM.

Rins’ comeback ride was impressive from P14, but the Suzuki man ran out of steam and eventually missed out on the podium by six tenths as he was forced to settle for fourth. The Spaniard did, however, help Team Suzuki Ecstar claim the Team Championship after a stunning year that’s seen both riders win and challenge for the crown, Mir ultimately taking it.

Binder got the better of Oliveira to return to the top five for the first time since the Austrian GP, and the South African also strengthened his grip on the Rookie of the Year title as he heads for the finale 20 points clear of Alex Marquez (Repsol Honda Team). Oliveira in sixth make it three KTMs in the top six too, and the Portuguese rider arrives on home turf in form.

Just behind the KTM duo, Mir took the chequered flag. Pandemonium raged on the pit wall as Suzuki witnessed their rider come across the line to win the 2020 FIM MotoGP™ World Championship, the young Spaniard joining Barry Sheene, Marco Lucchinelli, Franco Uncini, Kevin Schwantz and Kenny Roberts Jr. as a Suzuki Champion. An incredible achievement from the sophomore, and the entire Hamamatsu factory, after a stunning season.

Dovizioso almost sprung a late surprise as he crossed the line just 0.026 behind Mir and could have possibly gone for a lunge, but he was the second Ducati home and took some solid points. Aleix Espargaro crossed the line in a solid P9 to grab his second top 10 of the season, the Aprilia man taking the flag one place ahead of Maverick Viñales (Monster Energy Yamaha MotoGP) after a tougher one for the number 12.

And so, Valencia plays host to yet another Championship-deciding MotoGP™ race – and an amazing last lap duel. Suzuki now head to Portimao with the triple crown in sight, although the Japanese marque are equal on points with Ducati in the fight to become Constructor Champions. Whichever bike crosses the line first will win the Championship.