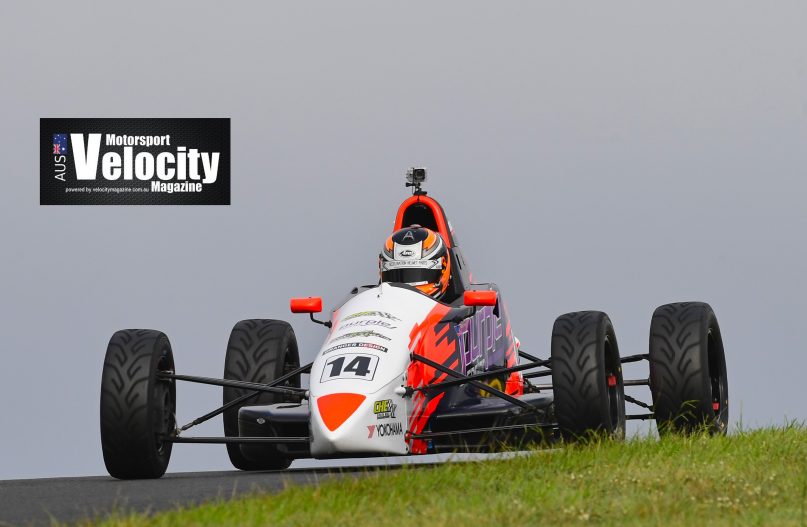 Rain showers are expected to greet competitors at this weekend’s third round of the Australian Formula Ford Championship at Winton Raceway, but Southern Highlands racer Lachlan Mineeff is refusing to let the forecast dampen his expectations.

Instead, the CHE Racing driver is focused on the thrill of racing in front of the Virgin Australia Supercars Championship audience for the second time in his career.

| ARE YOU RACING AT WINTON THIS WEEKEND AND NEED PHOTOS? CONTACT VELOCITY’S PRO PHOTOGRAPHERS HERE |

“It’s awesome to have a Formula Ford round back on the Supercars program; we raced with the Supercars at Tailem Bend last year, and it was an absolute blast,” Mineeff said.

“Once again, we’ll be competing in front of all the top Australian drivers and teams, and Winton always draws a big and passionate crowd.”

Like all Supercars support categories, Formula Ford will also benefit from live television coverage on FOX Sports this weekend.

“The live TV will be really good exposure, and people can also live stream the races by downloading the Kayo Sports app,” Mineeff said.

“We’ll all want to put on a good show, so our races will be well worth watching.”

Mineeff tested at Winton last week, but said the expected wet weather could change the team’s approach to the event.

“The testing was valuable, and we made some progress with the car setup and with my driving, but a lot of what we learned will become irrelevant if it’s wet,” he said.

“A bit of rain wouldn’t actually be a bad thing; it tends to level the playing field, and it’s good practice for all of us young drivers to handle a race car on a low-grip surface.

“The other thing that will be important this weekend is qualifying – Winton doesn’t have any long straights and the braking zones are very short, so overtaking is difficult whether it’s wet or dry.

“We’ll be aiming to maximise our performance in qualifying, and reduce the amount of hard work I have to do in the races.”

| ARE YOU RACING AT WINTON THIS WEEKEND AND NEED PHOTOS? CONTACT VELOCITY’S PRO PHOTOGRAPHERS |