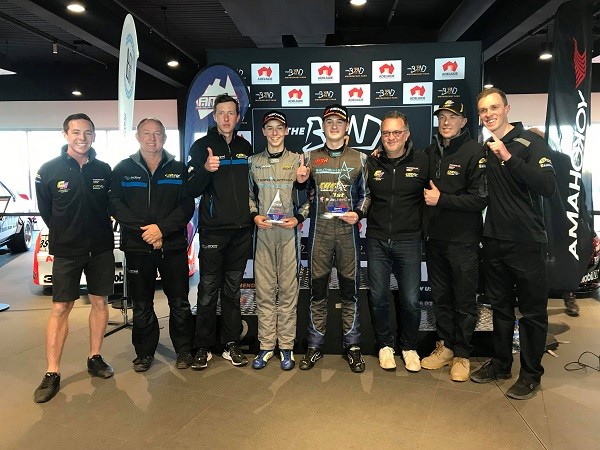 Lachlan Mineeff joins a notable list of drivers who have achieved success in the Australian Formula Ford Championship, breaking through for his maiden race and round victories at The Bend Motorsport Park on the weekend.

After qualifying fifth, Mineeff made up one place to finish fourth in Race 1.

The 16-year-old Southern Highlands racer again ran fourth for most of Race 2, but was able to improve to second place when he slipped past a couple of his rivals in the final corner.

Starting from the front row of the grid in Race 3, Mineeff made an excellent start and accelerated into the lead – from there, he was never headed, and led every lap to secure his maiden victory at a national level.

After narrowly missing the podium on several previous occasions, the Oxley College student was elated with the weekend’s result.

“What a fantastic weekend – we’ve been chipping away and gradually improving, so to finally break through for our first overall podium result by finishing on the top step is just an amazing result,” Mineeff said.

“We knew the car was good as soon as we hit the track for practice on Friday, and we kept refining it throughout the weekend.

“I was a bit disappointed after qualifying – I thought we could have been higher than fifth – but in the first race we had the speed to run with the lead pack and I felt we were on for a strong weekend.

“A bit of luck went our way in Race 2, and in Race 3 I made one of my best starts ever.

“Once I had the lead, I knew I had to make the most of it, so I put my head down and made sure every corner of every lap was perfect. The cars behind were battling each other for second, which allowed me to open up a gap.

“On the last lap, there were a few nervous moments when I had to lap some slower cars, so I was very relieved when I saw the chequered flag.”

Mineeff’s team-mate Tom Sargent finished second overall to secure a 1-2 result for the CHE Racing Team, and Mineeff paid credit to the hard work of his crew.

“To share such an awesome result with Tom makes it especially sweet, and combined with (team-manager) Cameron Hill’s win in Carrera Cup last weekend, it’s been a very successful couple of events for the whole team,” he said.

Mineeff will next be in action for the fifth round of the championship at Melbourne’s Sandown Raceway, 20-21 July.