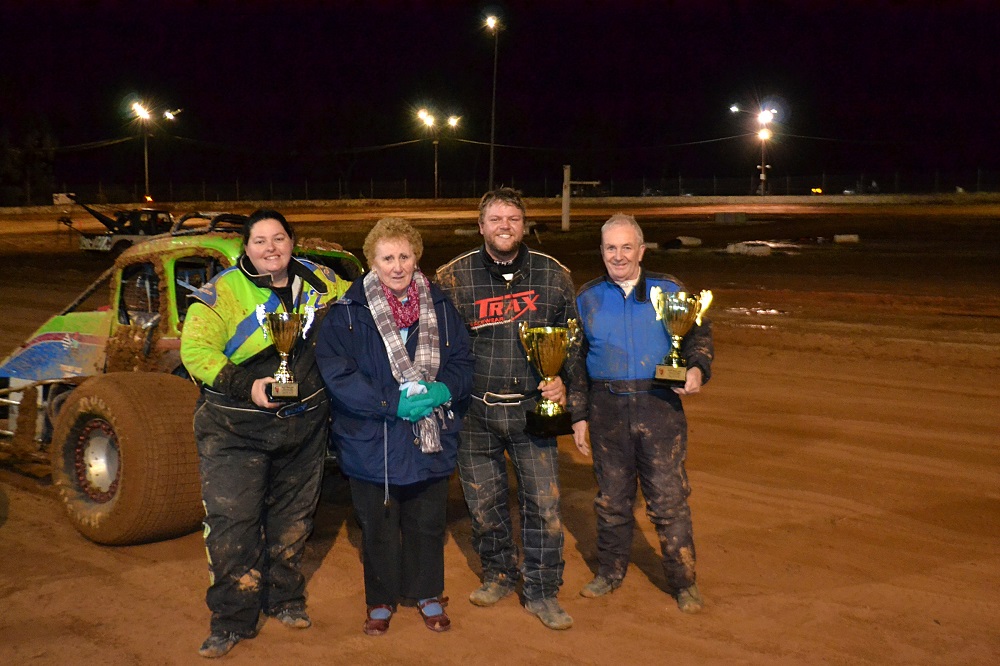 Boyle in the Aerodrome Automotive supported Pollard Memorial got off to a terrific start winning the first qualifier relegating Bendigo and local club members down the results. The locals kept Boyle honest in the second qualifier with Lennie Clark from Bendigo winning ahead of Boyle and Daniel Wilson from the Goulburn Valley. Boyle had a massive win in the final qualifier with an almost nineteen second margin back to Clark in second.

A twenty lap end to the event in the feature event began with Clark and Boyle on the front row followed by Jason Ahearn, Wilson, Andrew Ahearn and Ben Naismith. Boyle assumed the lead from the start with Naismith moving from last to fourth by lap five. At the half way mark Boyle, Clark, Jason Ahearn were the top three as they had been since the drop of the green flag. When twenty laps came to an end Boyle had taken the big win by a huge margin almost a complete lap on second placed Clark then came Jason Ahearn, Naismith, Andrew Ahearn and Wilson.

The SDAV Hot Rod field were split across four heat race events with Stan Marco Snr winning all three of his qualifiers cementing his spot as the top qualifier. Marco Snr won the first race by almost fifteen seconds, then the second by just over five seconds. Kali Hovey won the third qualifier the only driver other than Marco Snr to win a race before Marco Snr won the last heat ahead of Stanley Marco Jnr by almost eight seconds.

Six laps into the race Meakins led Jenkins, Linehan, Wilkes and Russell Hovey and Marco Snr was out of the race. Russell Hovey moved into third by lap ten and with five laps to go Meakins was leading Jenkins, Russell Hovey, his daughter Kali and Linehan. Meakins lapped up to fourth and with a ten second margin took the win from Jenkins, Kali Hovey who passed her father Russell and then Linehan in fifth.

In Open Saloon racing Paul Lamb took the steering wheel of the number one car from his brother Phil who finished second two weeks earlier. In the closest finish of the night, Paul Lamb took the win ahead of last meetings winner Adam Box by just 0.070 of a second. Darren Holt slotted in for third with Jay Nicolaisen and Garry Gapes rounding out the top five finishers.

Production Sedan feature action finished with a back to back win for Mark Cecil who drove away from the field finishing twelve seconds ahead at the finish line. Scott Burchett had a terrific result and a great nights racing, he finished second with Troy Britton, Leigh Jeffrey and BJ Harris rounding out the top five. Cecil was never passed after assuming the lead on lap one of ten.

Daniel Smith won the Junior Sedans final by almost ten second ahead of Cecil brothers Josh and Luke with Cooper Laurie and Keiden Britton rounding out the top five. Smith was out the front of the field from start to finish.

Finally Chloe Lamb continued her winning ways in the Ladies Saloons. This time she was able to defeat Kelly Lamb, Belinda Chalcraft, Jas Bergman and Leanne Hodge in the ten lap final, however early it was Chalcraft who held the lead for the first three laps of ten before Lamb passed her. Two laps later Chalcraft dropped to third behind Kelly Lamb.

Racing returns to Rushworth Speedway on the 25th of May for the final show of the year with Compact Speedcars and Grand Prix Midgets visiting the venue.