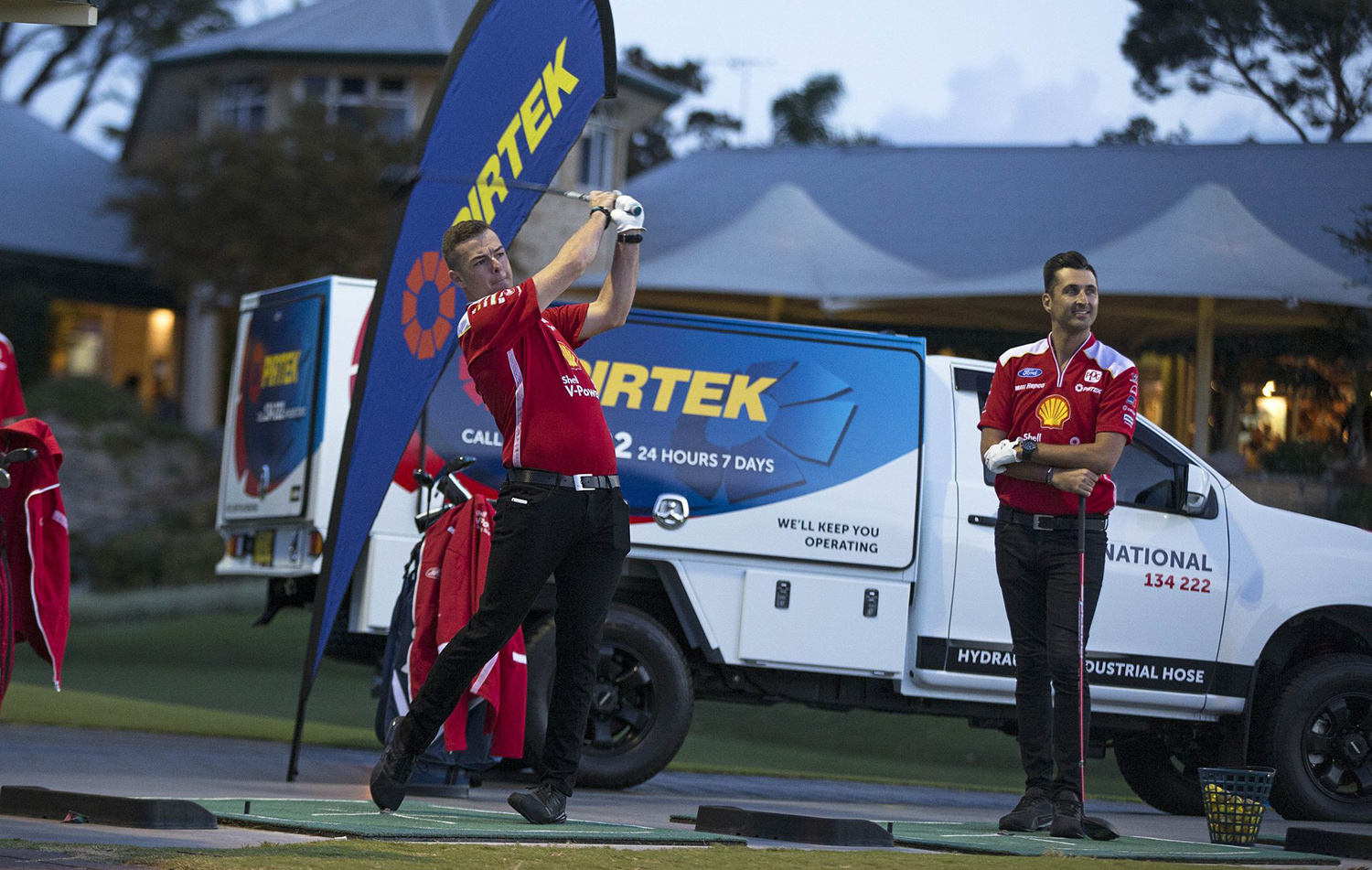 Virgin Australian Supercars Championship front runners Scott McLaughlin and Fabian Coulthard have had the chance to adapt early to some night time “driving” conditions in preparation for the first PIRTEK Perth SuperNight at Barbagallo Raceway this week.

McLaughlin and Couthard headed to the Joondalup Resort tonight where they were given some personal “driving” tips under lights by leading West Australian amateur golfer, Haydn Barron – not on track, but on the driving range.

The Shell V-Power Racing pair hit several buckets of balls under the watchful eye of Barron who worked one-on-one with them on their “driving” technique at one of Australia’s leading golf resorts.

The Barbagallo event gets under way with practice on Thursday and continues with races on Friday and Saturday nights.

McLaughlin currently leads the championship after four rounds and is also the defending series champion.

Fabian currently sits second in the championship after winning race two in the last round at Phillip Island in Victoria three weeks ago.

McLaughlin won both races at Barbagallo Raceway last year – the second race he won from 19th on the grid after narrowly avoiding multi-car incident on the first lap.

The Supercars championship heads to WA after recent controversy where the Ford Mustangs in the field have been forced to make aerodynamic changes following early season success.

While the night time conditions will present a new variable so will a freshly resurfaced track which is expected to produce record times.

“It was just great to get out here tonight and relax by smashing a few balls around,” said McLaughlin.

“It was a nice tie in with the night time “driving” theme and created a bit of interest in the first PIRTEK SuperNight this week.

“It is always great to work with champions in their field and to watch a player of Haydn’s calibre hit the ball is something special.

“Joondalup has a great reputation for a long time and it’s a pity I won’t have time to get in a round here before we head home. I feel like a game after my tips tonight.

“I hit them OK, but I can assure you I will be looking for a little more consistency in our races on Friday and Saturday night at Barbagallo.”

“As a golfer I make a good race car driver,” said Colthard.

“I probably benefited the most from Haydn’s tips tonight, but I don’t think the pro circuit is under any threat.

“It was a nice way to warm up for the first PIRTEK SuperNight which I think is going to provide no shortage of action at track or live on TV.”

“Fabian started a bit rough, but we got him going in the right direction by the end,” said Barron.

“Scott hits the ball pretty good, but lost a little mid-way through the night.

“It’s probably safe to say they will both want to be “driving” a little straighter and more consistent on Friday and Saturday night at Barbagallo.

“It was a bit of fun and I look forward to the boys showing me around their office at the weekend.