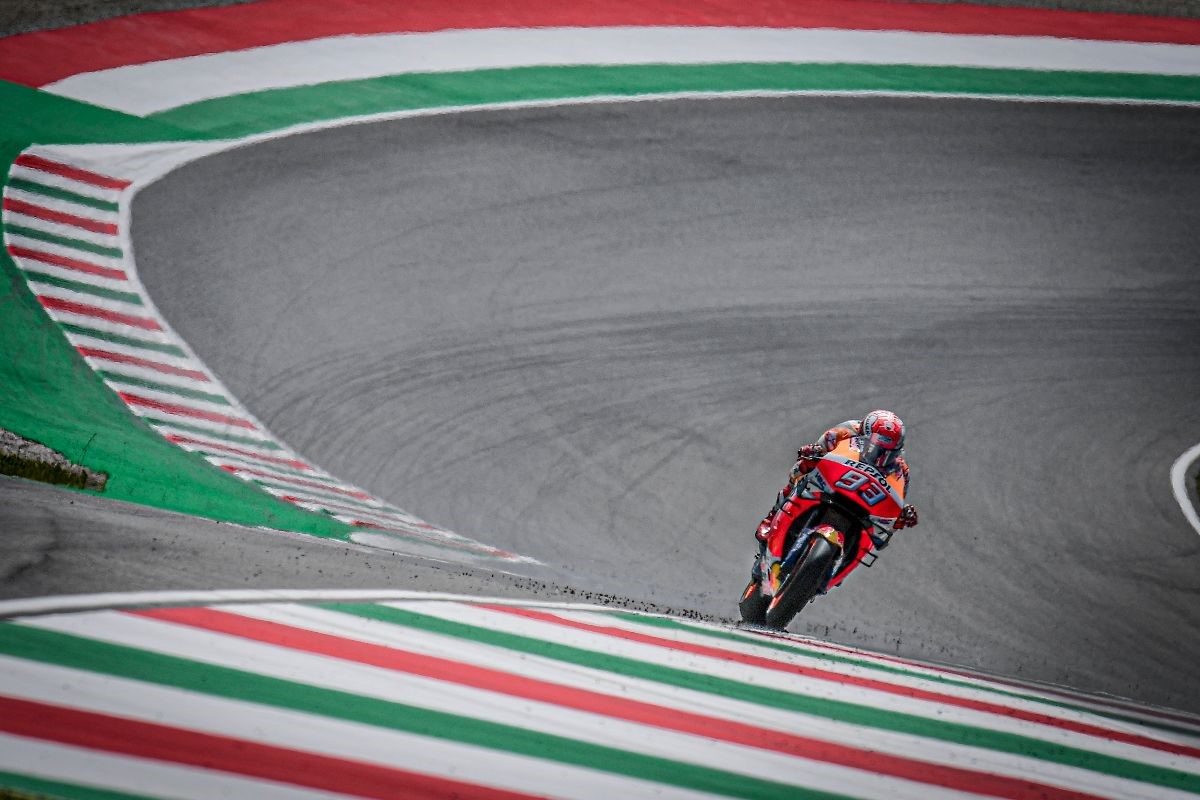 Marc Marquez (Repsol Honda Team) played qualifying to perfection in the Gran Premio d’Italia Oakley as the reigning Champion struck late to take his second pole position at Mugello and reassert some authority over ever-impressive rookie Fabio Quartararo (Petronas Yamaha SRT), setting a new lap record in the process. Nevertheless, Frenchman Quartararo will start his first premier class race at Mugello from second as both top Yamaha and top Independent Team rider, with Danilo Petrucci (Mission Winnow Ducati) completing the front row and flying the tricolore after a difficult day for a couple of his compatriots on home turf.

It was a star-studded Q1 to begin deciding the grid, with Valentino Rossi (Monster Energy Yamaha MotoGP), Andrea Dovizioso (Mission Winnow Ducati) and Jorge Lorenzo (Repsol Honda Team) all fighting it out to move through, and it was a nail-biter of a finale – for Dovizioso at least. On his final flying lap it was all or nothing for the 2017 Mugello winner, but he made it count to top wildcard and teammate Michele Pirro by just thousandths – knocking out Alex Rins (Team Suzuki Ecstar), who therefore starts 13th. But that’s better reading than it is for Lorenzo and Rossi, who line up in P17 and P18 respectively after not making it out of Q1 – 13 premier class wins at Mugello on Row 6.

In Q2 then, Dovizioso had another shot – but it was Marquez who was back in the driving seat. After getting followed by Pirro the reigning Champion decided to turn the tables on Ducati in the latter half of the session and actually followed key rival Dovizioso on what would turn out to be his record-breaking pole lap – getting a good tow from the Borgo Panigale machine as the flag came out and able to depose Quartararo. The Frenchman topped FP4 but couldn’t quite eke out those final two tenths, and he didn’t get a tow to the line…

Petrucci then is the sole home hero on the front row, and he’s had some serious pace all weekend. Searching for his first win and with previous podium experience at the venue, he could be one to watch and will be joining Quartararo on the mission to overtake Marquez off the line and convert pace into podium.

Franco Morbidelli (Petronas Yamaha SRT) heads an all-Independent Team Row 2 ahead of Jack Miller (Pramac Racing) and Cal Crutchlow (LCR Honda Castrol), with Maverick Viñales (Monster Energy Yamaha MotoGP) in P7 and Friday’s fastest, rookie Francesco Bagnaia (Pramac Racing), having a solid qualifying in P8 – just ahead of Dovizioso, who enjoyed a less solid day at the office. ‘DesmoDovi’ will need quite a start to try and get in the fight at the front from the off on Sunday – and it’s his 300th Grand Prix.

Takaaki Nakagami (LCR Honda Idemitsu) locks out the top ten, ahead of Pol Espargaro (Red Bull KTM Factory Racing) after another automatic graduation to Q2 for the impressive Spaniard. Pirro slots into 12th as he starts his 100th GP, just ahead of the aforementioned Rins – one of many big names looking to launch forward quick style when the lights go out.