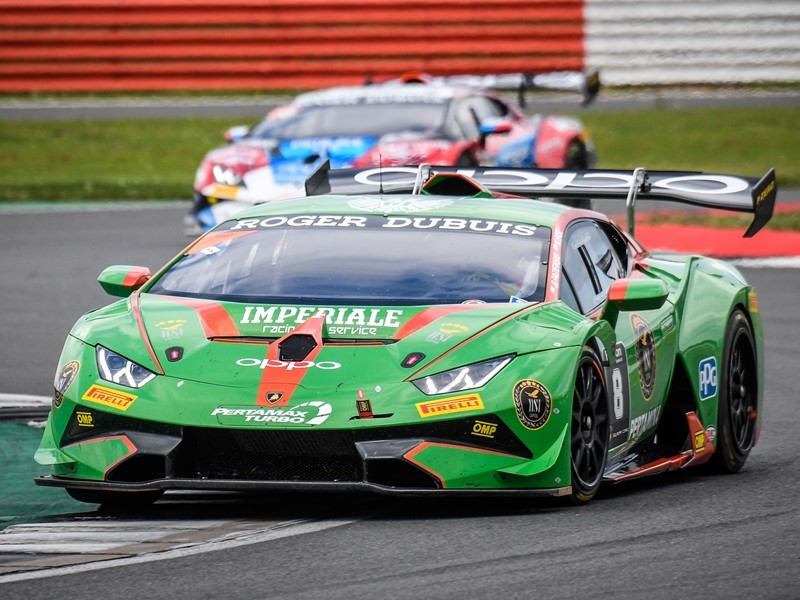 Karol Basz and Bartosz Paziewski made amends for their final lap disappointment in Race 1 to lead a dominant Imperiale Racing one-two in the second Lamborghini Super Trofeo race at Silverstone. The Polish duo started from pole position and led home a charging Vito Postiglione in the #44 Imperiale Racing, with Race 1 winners Stuart Middleton and Jack Bartholomew completing the podium in the #32 Bonaldi Motorsport Huracán.
From the rolling start, Basz made the perfect getaway and quickly opened up a healthy lead over Alberto di Folco (#9 Target Racing SRL) as Middleton dropped to third entering Copse for the first time. The positions stayed the same until the mandatory driver change pit-stop, but Davide Venditti – taking over from di Folco – spun at Chapel on his first lap out of the pits and dropped to sixth as a result. This allowed the #32 to move into second place after Middleton handed over the commands to Bartholomew, but the British pairing were soon overhauled by Postiglione who made a late charge to challenge Basz and Paziewski for victory.
Postiglione progressively reduced the gap to Paziewski – which had stood at over 10 seconds after the pit-stops – to just a second and a half entering the final lap. The Italian veteran however did not have enough laps left to mount a serious and had to settle for second as the #8 claimed a deserved first win of the season.
Despite mising out on an overall podium finish, di Folco and Venditti claimed Pro-Am class honours with fifth, behind the second Bonaldi Motorsport car of Danny Kroes and Sergey Afanasiev.
Frenchman Nicolas Gomar prevailed in an entertaining Am class battle which raged from the start and was only settled in the closing stages of the race. Raffaele Giannoni initially led the way, having got the jump on pole-sitter Jake Rattenbury in the #33 Leipert Motorsport Huracán. The pair were joined by Gomar, Robert Zwinger and the Pro car of Anthony Lambert in a superb five-car battle for eighth place. Gomar eventually came out on top after the pit-stops, with Giannoni slipping behind the recovering Micanek Motorsport Pro car of Josef Zaruba. Thomas Padovani and Steven Liquorish completed the class podium in third, with Mikko Eskelinen bringing the #33 home fourth.
Belgian siblings Benoit and François Semoulin repeated their Race 1 Lamborghini Cup class triumph with another victory in the second race, leading home solo entry and triple LC champion Gerhard van der Horst.