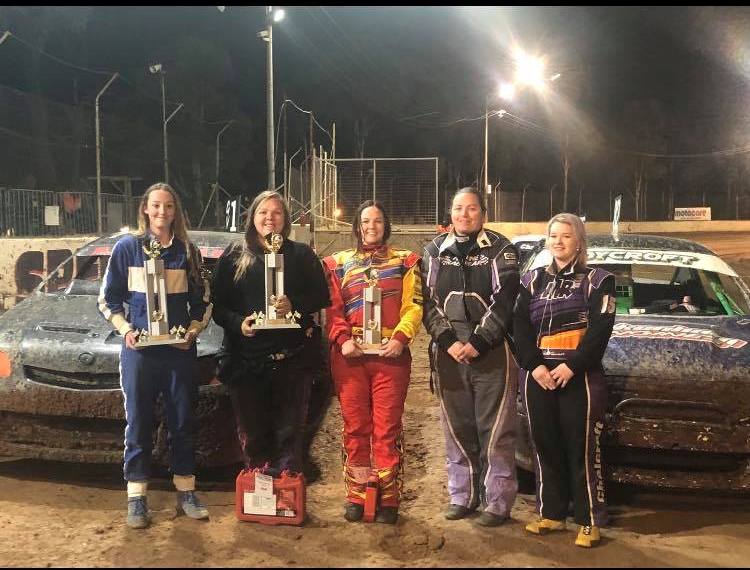 Rushworth Speedway held their latest race meeting this past Saturday night with features for the Ladies Sedans along with the visiting Goulburn Ovens Sedan Association and Compact Speedcars where Chloe Lamb continued her reign as the top driver in local ladies racing and Jamie Atkin all the way from Leeton in New South Wales won the first round of the two round Col Young Memorial.

In the Goulburn Valley Ladies Saloons feature event nine starters greeted the green flag for the twenty lap feature race. Chloe Lamb had qualified in pole position with Felicity Roycroft alongside and Chelsea Hodge and Kelly Lamb on the second row. Leading into the final, Roycroft had defeated Lamb twice in the three qualifying races.

Chloe Lamb, Roycroft, Kelly Lamb, Cassie Wicks and Chelsea Hodge finished lap one as the top five where positions remained the same until lap eight when Hodge exited the race and Wicks moved ahead of Kelly Lamb. With five laps to go Chloe Lamb still held the race lead from Roycroft, Wicks, Kelly Lamb and Belinda Chalcraft and that’s how the positions remained as the field reached the chequered flag with a five second race margin to the winner.

Jamie Atkin from Leeton in Riverina New South Wales won a terrific finish in the Goulburn Ovens Sedans Col Young Memorial first round by just .563 of a second whilst his friend Justin Granger was only .155 of a second ahead of third placed Sam Davey.  The fifteen lap final started with only four cars on track.

Atkin led every lap with Davey and Granger swapping second and third early before Granger secured the spot. At the finish Atkin deservingly after winning all three qualifiers, defeated Granger, Davey and Stuart Balins.

Justin Paull fresh off his recent Australian title second placed result won the Compact Speedcar feature event ahead of Goulburn Valley racer Louis Rodriguez and his sister Tania Hallett. Fifteen laps was the feature race journey with Rodriguez lining up in pole position with John Unwin alongside and Paull and his sister on the second row.

Rodriguez led until lap three where Paull assumed the race lead. At the ten lap mark the top five was Paull, Rodriguez, Unwin, Hallett and Jack Day and nothing changed until the last lap where Hallett moved into third ahead of Unwin. Paull took the win from Rodriguez, Hallett, Unwin and Day.

A thirteen car field began the Goulburn Valley Open Saloons final with Adam Box qualifying in pole position after winning all three of his qualifying races setting up a head to head with Phil Lamb in the feature event over fifteen laps. Box, Lamb, Darren Holt and Garry Gapes were the top four qualifiers.

Box got to the front quickly on lap one, Scotty Smith moved into the top five, however the very next lap he was out of the race and Michael Wicks moved into fifth.  One third race distance Box was still leading Lamb, Holt, Gapes and Wicks. Five laps later Box, Lamb, Holt, Wicks and Mark Bergmann were the top five and as attrition got the best of competition only five cars finished with Box taking a win of just over a second from Lamb, Holt, Wicks and Stephen Hopkins.

Production Sedan action continued to be terrific as it has been all season with a less than one second margin at the finish line in their final. Champion driver Shane Hutchins began in pole position with Mark Cecil, Geoff Lee and Scott Burchett the top four starters.

Ian Wilson who began in fifth moved to third on lap one of the race. On lap three Cecil moved into the lead and a lap later Wilson into second and at lap five it was Cecil, Wilson, Troy Britton who began in ninth now in third place with Hutchins and Lee the top five.  As the drivers finished lap ten Cecil continued to lead from Wilson, Britton, Leigh Jeffrey and Lee.

A number of changes in the run to the finish seen Lee and Britton drop out of the top five and Jeffrey move forward. Cecil took the win from Wilson, Jeffrey, Jaiden McCann and Hutchins.

Josh Cecil then took the win in the Junior Sedan final ahead of Daniel Smith, Cooper Laurie and Keiden Britton.