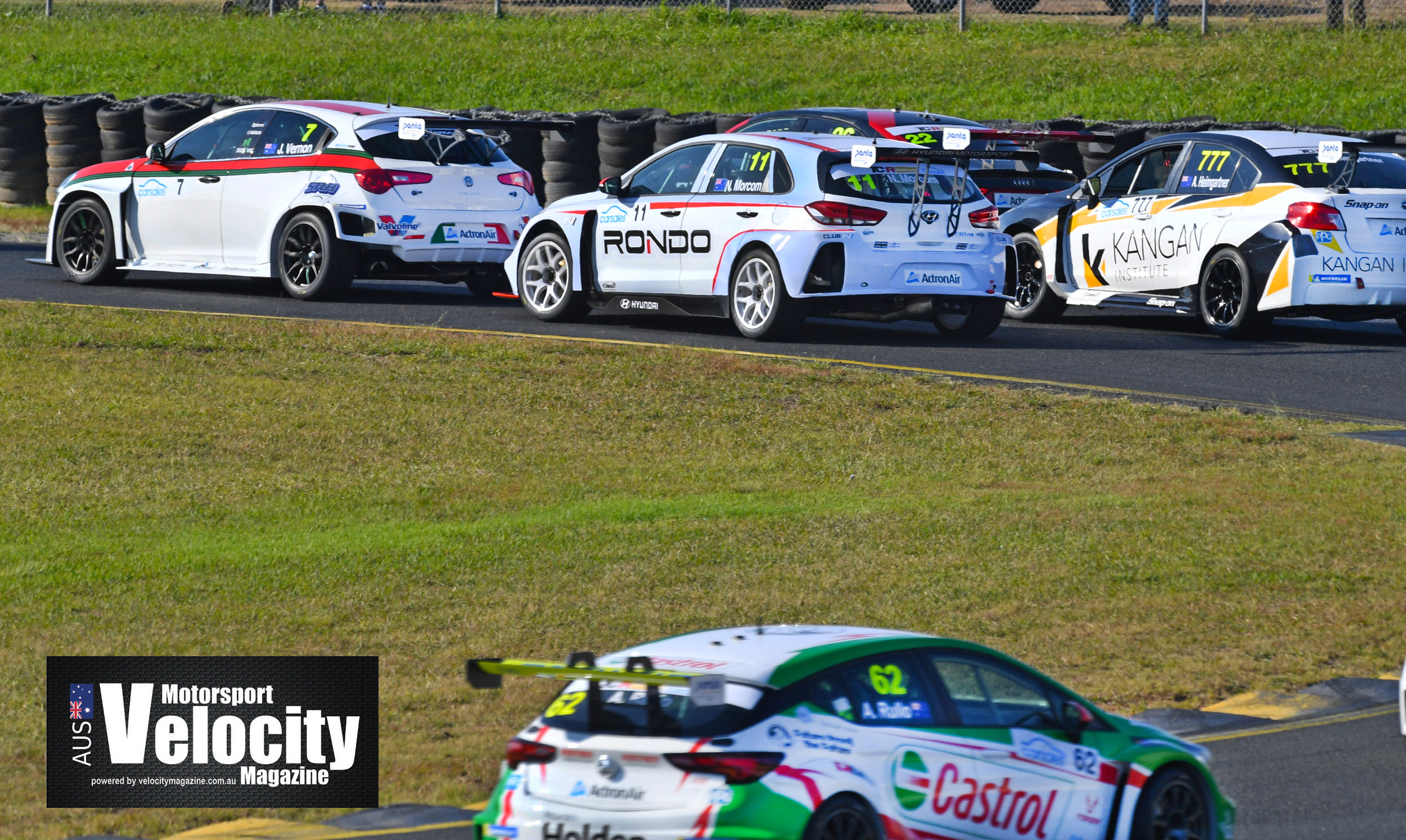 Team Alfa’s Jimmy Vernon made gains from P2 in the darkness yesterday to finish out qualifying in position 10.

“Big setup changes overnight made a difference. We were just too conservative yesterday.

We went for a second set of front tyres mid session and it transformed the car further. Putting our sector times together we had a top 5 car in qually. Unfortunately, on my second run I ran wide on turn two. I dropped a bunch of time finishing in P10” Stated Vernon.

The inaugural TCR event in Australia got away to a great start for Jimmy Vernon as he jumped 3 within the first lap.

Vernon quickly got into a comfortable grove and was lapping right on the money with the leading pack.

He quickly disposed of yesterday’s fastman Michael Almond and was looming up one the next gaggle when he pushed just a little too hard and ran off the track at turn two.

Unfortunately the off was because of a punctured front right tyre that required a trip to the pits for a replacement. The team elected to take a good look to ensure no other damaged was sustained when the tyre let go.

Vernon rejoined and went on to finish in 16th position.

“The car was wicked fast off the start” states a beaming Vernon. “The launch control in these things are magic. It enabled me to whip around 3 on the first turn. I hung wide in turn 4 and Morcom slipped back past.”

“We were truckin along real nice and matching the pace of the front runners only to push just that little bit too much. I ran off the track due to a puncture.” Stated Vernon.

“After leaving the pits I just circulated to maximise my finishing position”. “These things are great to drive and im sure those at the track and watching on TV were as impressed as I was” quipped Jimmy.

Hard work pays off in Race 2 for Vernon

TCR Series race two turned it on for the big crowd at Sydney Motorsport Park.  The grid walk was packed with many first timers enjoying a lovely sunny day and the ability to get up close with the cars and drivers.

Once the green flag dropped it was clear it was game on! The start was much more aggressive than yesterday’s race one.  For GRM’s Alfa driver Jimmy Vernon, it was a back row start due to race one’s tyre failure.

Vernon simply put on a show and by the end of the first lap he’d made 6 spots.  Nathan Morcom in the Hyundai slipped through on lap two in an aggressive move.

The safety car was deployed on lap 11 for the stricken VW of Alexandra Whitley who had beached herself.  On the restart Vernon was battling hard with Aaron Cameron and Michael Almond.

As the chequer flew, Vernon finished a very creditable 9th.

“Starting from the back was going to be a challenge. The team gave me a great car and I was able to use it to carve my way through the field” stated the smiling Sydneysider.

For those that have ever competed, one of the worse feelings is when your car is stranded on the startline.

Pulling up to the start line for race three Jimmy was confidant of a good result. The team had tuned the Alfa up after his “giant killing” race 2 finishing in the top 10 after a backrow starting position.

“I simply followed the startline procedure as in the previous two races. I let the launch control button go and the thing just stopped” quipped Vernon. “I immediately looked in the mirror and braced as half the field was behind me. The only one to make contact was the Audi of Rik Breukers which punched the right rear wheel into the arch” stated Vernon.

“Next thing I see is the sump of the Audi pass my driver’s window as it was on two wheels and nearly rolling over” he also went on to say.

He got the thing refired and limped to turn one where he stopped completely with damage.

A disappointed Vernon said “We’ll have a look to see if something’s gone wrong with the launch control as it worked faultlessly in the other two races”.

“For the first event in these cars I’m super impressed and understand why there so popular around the world. Great to drive and the brakes are amazing” he went on to say.

Jimmy would like to thank those that have been following his progress on social media and via his website.

Jimmy and the team will be back in action at Round 2 at Philip Island from the 6th to 9th June.