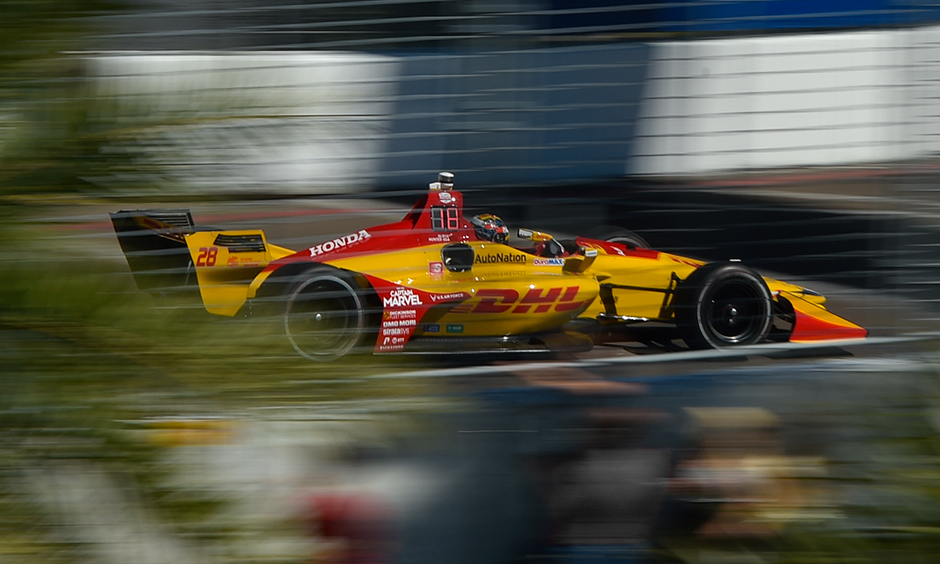 Taking advantage of racing in their home state, Ryan Hunter-Reay and Spencer Pigot set the pace in practice as the 2019 NTT IndyCar Series season opened at the Firestone Grand Prix of St. Petersburg.

Hunter-Reay was fastest overall in Friday’s two practices, turning a lap of 1 minute, 0.8969 of a second (106.409 mph) on the 1.8-mile, 14-turn temporary circuit that encompasses city streets and a runway of Albert Whitted Airport. His standard-setting lap in the No. 28 DHL Honda came in the afternoon session after Hunter-Reay ran second best in the morning practice.

“We definitely made some changes between the sessions,” said Hunter-Reay, who lives in Fort Lauderdale. “At first, I thought it was a bit of a handful – it still is. We’re right on the edge of tipping it over, I think, but it was a good outing.

“The car is pretty good. It’s a handful at the moment, I’d like it to be a little more polite in a few areas. We’ll keep working on it. … It’s a good step but it’s only Day 1.”

Pigot also ran his best lap in the afternoon practice, when teams took advantage of the set of softer red-sidewall Firestone alternate tires available to them for first-day practice.  Driving the No. 21 Ed Carpenter Racing Chevrolet, Pigot was less than a tenth of a second behind Hunter-Reay, at 1:00.9812 (106.262 mph).

“It was a good day for us in the Autogeek Chevy,” said Pigot, who hails from Orlando. “I was really happy with the way the car felt this afternoon, on reds (Firestone alternate tires) in particular, so it’s nice to have that knowledge going into qualifying. We’ll go back tonight and see where we can still improve, but so far we are happy with all of the progress we’ve made.

“We had a really strong second session there. It’s obviously extremely tight still, so we still have work to do, try to find if we can go quicker and if we can try and stay up at the pointy end of the grid.”

The Firestone Grand Prix of St. Petersburg serves as the NTT IndyCar Series season opener for the ninth straight season, this year kicking off a 17-race schedule that features the most diverse array of tracks including street circuits like St. Petersburg, permanent road courses, short ovals and superspeedways.

Hunter-Reay, one of two active Indy car drivers who competed in the first St. Petersburg race in 2003, has never won the event in 12 previous tries. He has finished second on two occasions and third twice, appreciating the chance to shine in his home race.

“I think you ask anybody, they absolutely love it here,” Hunter-Reay said of St. Pete. “It’s just a fantastic event, fantastic venue. The location, everything, and then, yeah, it’s my home race, Spencer’s as well.

“It always feels important to do well here, not only because of that, but it’s the start of the season. It kicks off the momentum that you’re going to roll into the next string of races before we get to Indy. It’s a fantastic layout, a lot of fun from behind the wheel, and this city, this town, the people here really support us. Yeah, it’s definitely a great event, I think one of the best on the schedule.”

The field features six Indianapolis 500 winners and four rookies. Colton Herta was quickest of the newcomers and fourth overall with a lap of 1:01.0776 (106.095 mph) in the No. 88 Harding Steinbrenner Racing Honda.

A pair of driver announcements were made heading into the race weekend. On Thursday, Carlin announced that 2018 Indy Lights presented by Cooper Tires champion Patricio O’Ward will drive in 13 NTT IndyCar Series races for the team this season. O’Ward will be the team’s second driver for 12 races and be in a third Carlin entry at the 103rd Indianapolis 500 presented by Gainbridge.

Dale Coyne Racing announced on Friday that James Davison will drive for the team in the Indianapolis 500 in a partnership with Jonathan Byrd’s Racing, Hollinger MotorSport and Belardi Auto Racing. Davison will drive the No. 33 Honda and becomes the 33rd official entry for “The Greatest Spectacle in Racing.”