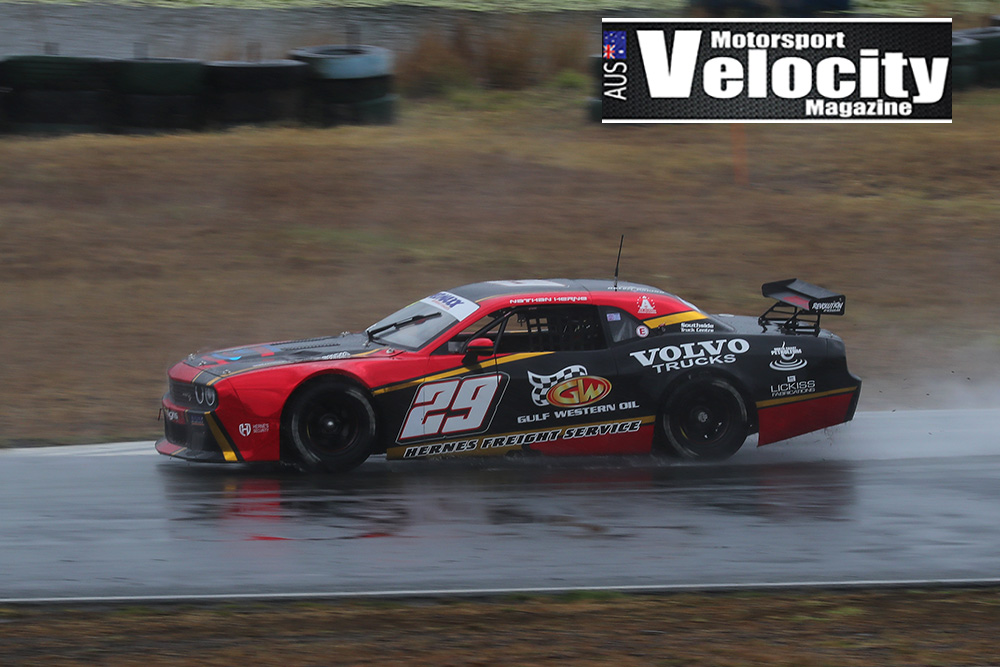 Rising star Nathan Herne has clean swept the Queensland State of Origin round of the PROMAXX Performance Exhausts TA2 Muscle Car Series at Round 3 of the Australian Motor Racing Series (AMRS) at Queensland Raceway.

The 18-year old convincingly won all three races on Sunday to score the round win ahead of John McLaughlin and Peter Robinson.

After retiring from visibility issues during a wet Race 1 on Saturday, Kent charged back to third from eighth in Race 2 in the Fit Flask Camaro, and earned the Hyperco Hard Charger Award for his efforts. He had to fight his way past a feisty battle-pack late in the race with Robinson, Anthony Tenkate and Shaun Richardson.

Richardson, the former stock car and Stadium Super Truck racer spun the Road Rage Industries/RTC Group Dodge at Turn 3 with a couple of laps to go, while debutant Chris Pappas spun through the final corner with the chequered flag in sight.

Pappas, who only bought his Mustang earlier in the week and turned his first laps on Friday, claimed the Gulf Western Oils Well-Oiled Award for his efforts in his first race out of Hyundai Excels.

Tenkate dropped back to the back in Race 3 after spinning to the inside of Turn 2 on the second lap, but recovered to sixth position.

Race 4 was the most dominant performance for Herne, stretching a 13-second lead to score his fourth consecutive lights-to-flag win while McLaughlin and Kent fought for second place. The pair swapped positions multiple times throughout the race before McLaughlin got back in front on the penultimate lap.

Likewise, the battle was on for fourth place between Robinson and Tenkate, as the pair ran nose-to-tail for the opening two thirds of the race. Tenkate got Robinson into Turn 4 with two laps to go and held him off to the chequered flag.

Herne claimed the overall round win from McLaughlin and Robinson, while Robinson also topped the Masters class from Richardson and Tenkate.

Debutant Nick Lange earned the Coolshirt Systems Move of the Moment Award for a consistent weekend without any laps prior to taking the wheel on Friday.

The next AMRS event is scheduled for Sandown Raceway in Melbourne on 27-29 November, pending border restrictions easing in Victoria. The PROMAXX Performance Exhausts TA2 Muscle Car Series will be part of this event with a Victorian State of Origin finale should the event take place.

“It was an awesome weekend, at this stage It will likely be my last event for the year so to finish off the year on a high was great and it puts us in good stead for 2021,” said Herne.

“Thanks to the AMRS and TA2 Muscle Car Series who did a fantastic job in hosting this event.

“I don’t know my plans yet for 2021, for now we’ll continue to focus on TA2 and see where that takes me.

“I’ve had some massive opportunities thrown at me from driving the TA2 car, and it really is a great category to get your hame out there.

“When we first joined the TA2 Muscle Car Series we didn’t know where to go. We couldn’t afford Super2 or Super3 and at that point I was too old to continue in Formula Ford, but to go into TA2 was probably the best career choice we ever made.

“It’s an awesome category with awesome people involved, no politics, just a great series to race in.”