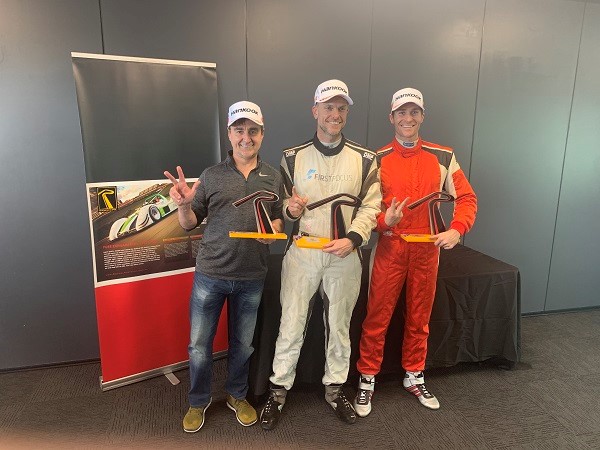 GWR Australia has overcome a series of hurdles in Round 4 of the Radical Australia Cup at Phillip Island to sweep the round podium, Peter Paddon taking overall honours ahead of Chris Perini and Paul Braico.

The weekend started well in qualifying, Paddon taking pole ahead of Kosta Pohorukov and Perini, with Braico in sixth position.

Race 1 was held in wet conditions, Perini taking victory after seeing off a late-race challenge from Paddon, with Braico finishing in third position.

Another second place in Race 2 enabled Paddon to clinch the round victory by just a single point from Perini, who charged from a pit-lane start to third at the chequered flag, while fifth for Braico was enough for him to seal the GWR podium lockout.

“Race 1 was consistently wet – it felt like there was just enough water on the track to suit the wet weather tyres,” Paddon said.

“Chris drove really well in the wet, and I went off the track on the second last lap while I was chasing him.

“In the second race, we didn’t quite nail the tyre pressures, which was down to the Australian Prototype Series race being immediately beforehand; the car wasn’t bad, but Mitch Neilson jumped me in the pit stops, and I wasn’t quite quick enough to catch him in the second stint.”

Perini was thrilled to return to the podium after a problem in the Prototype race threatened to rule him out of Race 2 altogether.

“It was a very topsy-turvy weekend,” Perini said.

“Race 1 went to plan, and I was actually surprised to be as fast as I was, considering the quality and experience of the competition.

“In the Prototype race just before the second Radical race, I heard the engine do something funny and I pitted straight away.

“It turned out one of the uprights had broken, and separated the wheel from the diff – the strange engine sound I heard was because the engine was only driving one wheel!

“The GWR mechanics had about 15 minutes to get it fixed, so it was panic stations… but it was precision panic! They knew exactly what they needed to fix, and they completed it with about 30 seconds until pit exit closed.

“Unfortunately, I was managing a fuel surge issue towards the end of Race 2 which meant I couldn’t quite challenge the others, but I’m very happy with second overall and to be part of the all-GWR podium – it’s a great reward for the crew after their tremendous effort to get me on track.”

The weekend’s result sees Paddon and Perini tied on points at the top of the Radical Australia Cup standings with two rounds remaining.

Pohorukov scored finishes of fifth and ninth in the two races to take eighth overall, while in the Australian Prototype Series, Paddon finished as the best of the Radical drivers in fifth overall, while a rapidly-improving Sue Hughes came from 19th in qualifying to finish 11th overall for the weekend.

“It was my first time back in a car at a high G-force circuit after my accident last year, and it was a fantastic weekend,” Hughes said.

The next round of the Radical Australia Cup will be held at The Bend Motorsport Park on 23-25 August; GWR’s attention now turns to Round 5 of the Porsche Carrera Cup at Townsville next weekend.