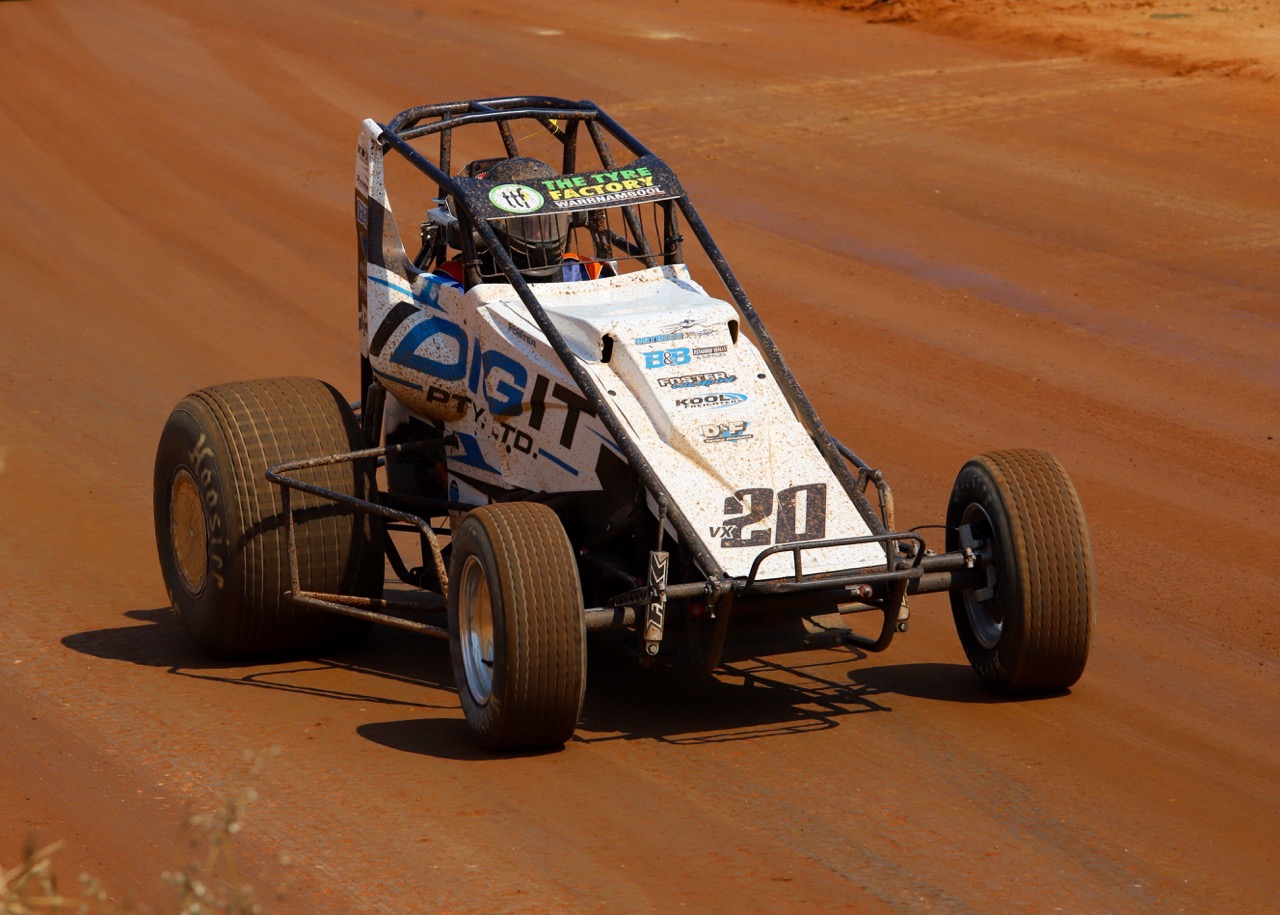 Drouin Speedway dished out another great day’s racing with thrills and spills all day including a number of cars picking a fight with the concrete retaining wall and coming off second best, a rollover and feature wins to Brad a Foster, Dan Metcher, Todd Moule and Dylan Barrow.

The third and final round of the West Gippsland Wingless Sprint series ended with a first ever feature race win to Brad Foster. Having driven Sprintcars and Wingless the last nine seasons Foster motored on to his feature win in front of his father and his wife. The pressure was on before the final race even had started with just a couple of points between Foster and Travis Evans  and both on the front row and aiming for the series win in this the final round.

Evans kept the pressure on Foster right through the early part of the race before he came unstuck and found himself out of the competition for the win and series. He even left the track before being told by infield crew the chequered flag was out if he wanted to finish the race and earn some points towards the series overall.

Foster went on to win the race from Kim-Loong Gosling, Scott Irons, Wayne Logue and Renae Eastham. Gosling and Irons had a race long tussle also with Gosling prevailing and covering every attempt from Irons to take his position. Foster won the West Gippsland Wingless Sprint series along with his race day win.

In Sports Sedans Steve Akil led the early part of the Sports Sedan Challenge before a flat front right tyre put him out of the race. Dan Metcher who was already in a terrific race battle with Jackson Barneveld took the lead and the battle continued with Metcher first to the chequered flag from Barneveld, Gavan Dorain and Troy Glassborow.

The Drouin Cup for Speedway Sedan Victoria Junior Sedans was separated into Top Star and New Star drivers with Todd Moule a Drouin member who lives in Heathcote take 5he win ahead of Harry Orme with no other finishers.

For the New Stars two of the favoured drivers crashed out of contention when in winning position, Linken Paterson who hit the concrete wall and Kiarna Barton. This handed a lead over to Dylan Barrow who was being hounded by Jayden Bryant. Paterson’s brother River, was another victim of the concrete. Barrow took his first ever final race win from Bryant, Rye Orme, Seth Sloane finished the race after rolling his car onto it’s roof during a heat race and fifth place was rookie driver Brody Barton.

Junior racing in the Standard Saloons was terrific with Jack Yeomans picking up the win and majority of the club points for the day. He defeated Lewis Williams, teammate Deegan Benson, Owen Cecil and Harry Cecil. The Ladies Standard Saloons were low on numbers however Ashlee Wilson defeated Molly Johnson in the final.