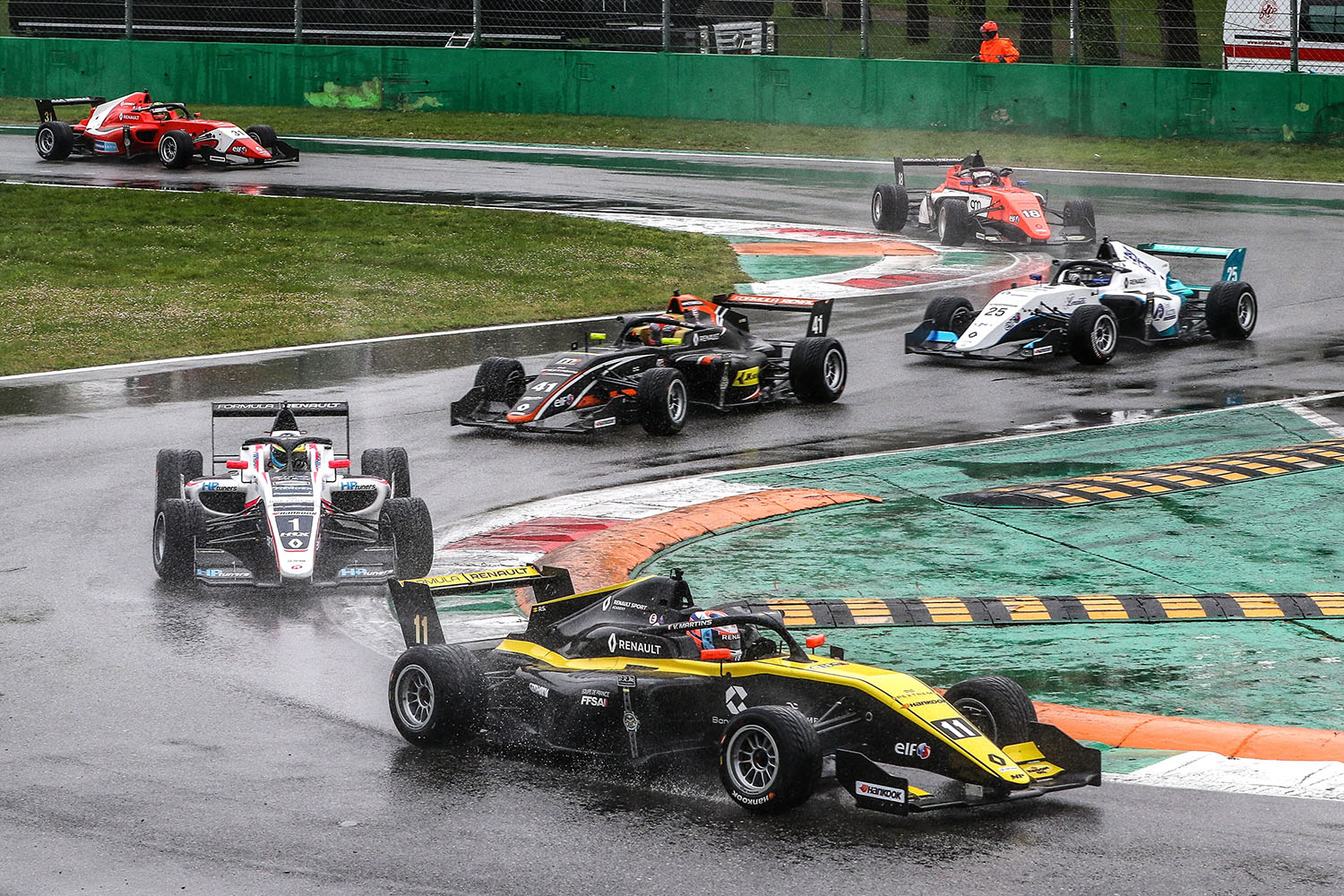 On a rain-soaked track due to overnight showers, Oscar Piastri (R-ace GP) and Alexander Smolyar were the first to go out during qualifying before swapping the top spot with Lorenzo Colombo and Victor Martins. The red flag caused by Alessio Deledda (Global Racing Service) resulted in a mad dash, seven-minute sprint final during which Alexander Smolyar posted a session best 2:02.812s, 54/1000th of a second ahead of Lorenzo Colombo and Victor Martins, who set the exact same time. Oscar Piastri and Kush Maini completed the top five.

The Russian turns the pole into victory

With the return of the rain, the race began behind the safety car. The field was let loose after three laps, but the safety car was back on track after contact between Alessio Deledda and Patrick Schott (FA Racing by Drivex) and another run in, involving Ugo de Wilde (JD Motorsport) and Xavier Lloveras (Global Racing Service).

When the race resumed, Alexander Smolyar held on to the lead, but Lorenzo Colombo and Victor Martins were pouring on the pressure. The French driver surprised his team mate to move up to second place before another safety car period to evacuate the cars of Yves Baltas (M2 Competition), Brad Benavides (FA Racing by Drivex) and Callan O’Keeffe (FA Racing by Drivex) from the gravel. At the restart, Alexander Smolyar resisted the attacks of Victor Martins, as did Lorenzo Colombo with Oscar Piastri and Kush Maini. Meanwhile, Caio Collet (R-ace GP) got past Patrik Pasma (Arden Motorsport) before they both attacked Amaury Cordeel (MP Motorsport), to drop him down to ninth place.

Alexander Smolyar (R-ace GP): “First pole, first podium and first win… It is a great, great day! The visibility was good, but I know that the drivers behind me were struggling. During the restarts, I saw the field getting bigger in my mirrors and that kept the pressure on for the entire race. I had hoped to do better yesterday, but we still have work to do to fight for the win on a dry track and I also made some bad decisions in the race. Today, I
reset everything to finish the weekend with a win!”

Victor Martins (MP Motorsport): “I think the most important today was to make it to the finish to score a lot of points for the championship. I saw an opportunity to pass Lorenzo at the first chicane, so I dove to the inside and I had enough grip to finish my move. I tried to do the same thing to Alexander on the last restart, but it was a bit too risky so I decided to think about the points and take the lead in the general classification. It is a good thing ahead of the next meeting at Silverstone.”

Lorenzo Colombo (MP Motorsport): “My weekend finished better than it started because my race came to an end at turn one yesterday. Today, the conditions were really difficult and it was very risky to try to overtake Alexander even though I had a faster top speed. Victor then surprised me on the second restart, but I managed to stay on the podium. Despite the mixed results, we know that we have a good base thanks to the excellent job we did with the team this winter. I hope to show this with even better results as soon as possible!”

Kush Maini (M2 Competition): “We had good pace in being consistently in the leading group during the pre-season collective tests. We expected to run up front, but last month I never thought that we would finish third in
our first race, then win the rookie category. This gives us a solid foundation and I hope that we can continue to get stronger as the season progresses.”