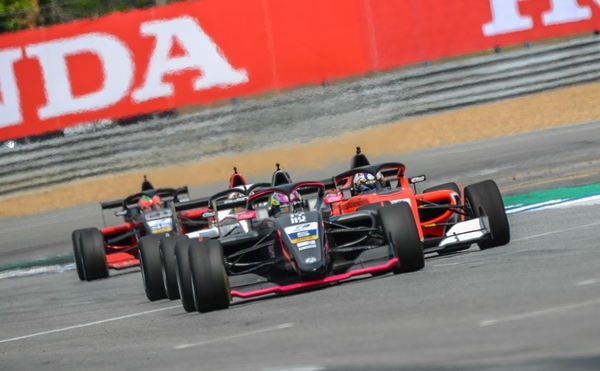 The F3 Asian Championship Certified by FIA makes its debut in Japan at the unique Suzuka Circuit from June 22-23. Ten teams will contest the crucial mid-season triple-header at the legendary 5.807 km F1 track, which will present the international field of junior single seater talent with its biggest challenge to date.

Leading the charge to Suzuka is Hitech Grand Prix’s Ukyo Sasahara, who is relishing the prospect of continuing his title campaign on home turf. Sasahara has won four of the six rounds so far this season, and holds a 14-point lead in the overall driver classification from team mate, Red Bull Junior Team driver Jack Doohan of Australia. The pair are joined at Hitech Grand Prix by championship newcomer Jackson Walls of Australia. Both Doohan and Walls are just 16 years of age, as is series newcomer Petr Ptacek of the Czech Republic, who makes his debut with Praga Seven GP.

Also making his first appearance in the F3 Asian Championship is Japan’s Kiyoto Fujinami, entered with B-Max Racing Team. Fresh from a second back-to-back win in the Fuji 24 Hours, the 24-year-old has contested the Japanese F3 Championship as well as the Japan Super GT – GT300 and Super Taikyu series.

China’s Daniel Cao, third in the championship after six races, returns with Absolute Racing alongside team mate Eshan Pieris of Sri Lanka, who trails him on the leaderboard by a single point. Pieris is tied on points with BlackArts Racing’s Brendon Leitch of New Zealand, recently chosen by Lamborghini Squadra Corse for its Young Driver Program 2019. Joining Leitch at BlackArts Racing in Suzuka are Japanese W Series driver Miki Koyama, who made her championship debut in Thailand with B-Max Racing Team, and Masters driver Thomas Luedi.

Japanese team Super License enters Tomoki Takahashi, seventh in the championship standings despite having missed the Thailand rounds last month. Takahashi is  joined in Suzuka by Takashi Hata who makes his first series appearance this season having finished runner-up in the Masters championship in 2018.

China’s Yu Kuai returns with Zen Motorsport, while 20-year-old Indian driver Akash Gowda will take on the challenge of Suzuka with his M-Sport Asia team. Australian Tommy Smith, who turned 17 earlier this month, is back with Pinnacle Motorsport. Smith is joined on the team by Irishman Jordan Dempsey, rejoining the championship having missed the Thailand rounds last month.

As well as the championship’s Japanese debut, the weekend will see the Tatuus F3 T-318 race on the Suzuka Circuit for the first time. The track, which has been described as a ‘temple of speed’, is the only figure-of-eight circuit on the F1 calendar. Containing every driving challenge imaginable – from the rollercoaster ‘Esses’, the Degner Curves, Hairpin and the flat-out 130R – it is the ultimate test of both man and machine. Requiring rhythm, strategy, intelligence, fitness and, perhaps most of all, courage, the Suzuka Circuit is notorious for separating the men from the boys.