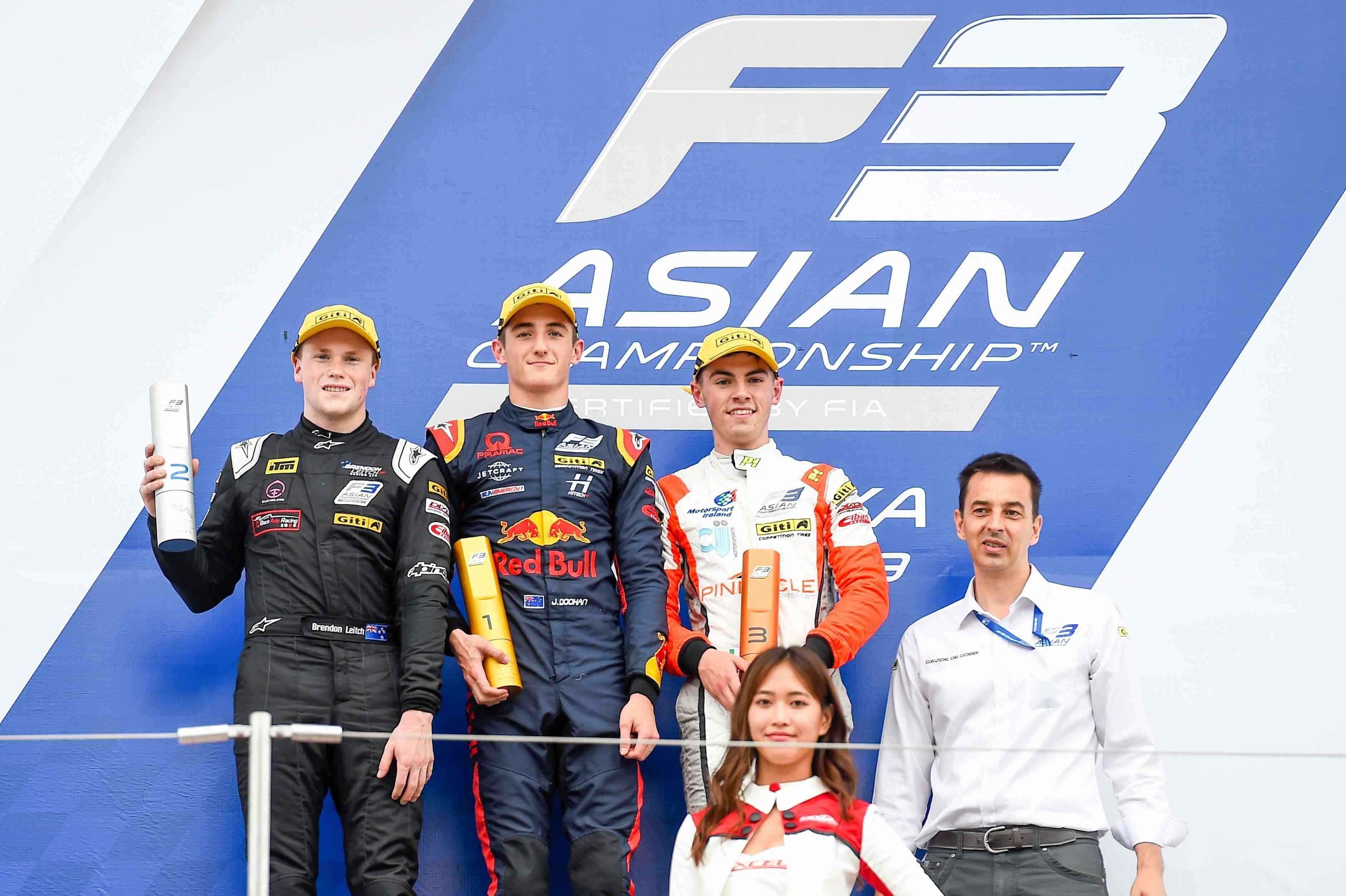 Hitech GP pair Ukyo Sasahara and Jack Doohan took a win apiece at the Suzuka Circuit today but, despite both drivers remaining at the top of the leaderboard, the team’s hitherto unbroken run of 1-2 finishes was brought to a halt as the notoriously unforgiving track brought plenty of drama.

Race 8 saw Sasahara take the win after an error by race leader Doohan saw him accidentally trigger the throttle fail safe algorithm, a move which cost him victory, with Absolute Racing’s Daniel Cao second over the line ahead of Hitech GP series newcomer Jackson Walls who took a podium on his debut weekend. In Race 9, it was victory for Doohan after Sasahara was handed a drive through penalty for an early-race incident with pole-sitter Petr Ptacek of Seven GP, who subsequently retired. Second was BlackArts Racing’s Brendon Leitch, his best finish of the season thus far, with Pinnacle Motorsport’s Jordan Dempsey claiming his maiden championship podium after B-Max Racing Team’s Kiyoto Fujinami’s dramatic retirement on the final lap.

In the Masters category, championship leader Paul Wong of the 852 Challengers took the win in Race 8 after rival Thomas Luedi of BlackArts Racing was handed a post-race penalty, with the positions reversed in Race 9.

Eight points now separate championship leader Sasahara and team mate Doohan at the top of the leaderboard, but with six races still remaining, six drivers remain mathematically in contention for the title. Third in the points is Cao, ahead of Leitch, Absolute Racing’s Eshan Pieris and ZEN Motorsport’s Yu Kuai. In the Masters category, Wong retains his lead but rival Luedi moves up to second after the Suzuka weekend.

Starting from pole and despite another good getaway, Doohan almost immediately came under fire from Sasahara, who dived up the inside and into the lead. However, unable to shift down, the championship leader was forced to run wide at the exit of turn two and Doohan reclaimed his pole advantage. The Australian set off on the hunt for the flag with Sasahara in hot pursuit.

Cao and Walls also made gains off the start, while Ptacek lost a place from P5. Further down the field, Takahashi was on a charge, making up for his misfortune in Race 7 where he was shunted while stalled on the grid. The Japanese ace was up to 11th from the back of the grid by the end of the opening lap and battling hard with Gowda.

Dempsey was an early retirement, slowing on track before eventually pulling off at Turn 13, with Smith also retiring two laps later.

As Doohan held the lead from Sasahara, behind the pair Cao was coming under intense pressure from Leitch, the Kiwi all over the back of the Chinese driver in his quest for the final podium. Racing to the max, Leitch swiped the barriers coming out of Degner 2, dropping down the order to sixth behind Ptacek as a result, before stopping on track the following lap. That brought out the safety car, obliterating Doohan’s 0.794 second advantage over his rival.

As the minutes ticked away, the safety car continued to lead the field as Leitch’s car was cleared to a safe position. As the lights went out on the safety car and the field prepared for the restart, Doohan dramatically rolled to a stop coming out of Spoon Curve with a little over five minutes remaining on the clock having inadvertently triggered the car’s throttle fail safe algorithm. Although he managed to get the car going again to cross the line in 10th, it was a heartbreaking end to what had been a second faultless run by the hugely-talented Red Bull Junior Team driver on the notoriously unforgiving Suzuka Circuit.

And there was more heartbreak to come. While race leader Sasahara had seen the safety car lights come back on up ahead, the chasing pack was still preparing for the restart. Takahashi was caught out, crashing into the barriers and ending what had been a superb comeback after the disappointment of his aborted Race 7.

Sasahara crossed the line behind the safety car to take the Race 8 win and extend his leaderboard points advantage. Cao took a well-deserved second place in the 12-lap race having got by Leitch and then held off a spirited and sustained attack by the BlackArts Racing driver, while championship newcomer Walls took the final podium place.

Wong took the Masters win, however it was Luedi who was first across the line. The BlackArts Racing driver was subsequently handed a 20 second time penalty for a procedural infringement by the team. 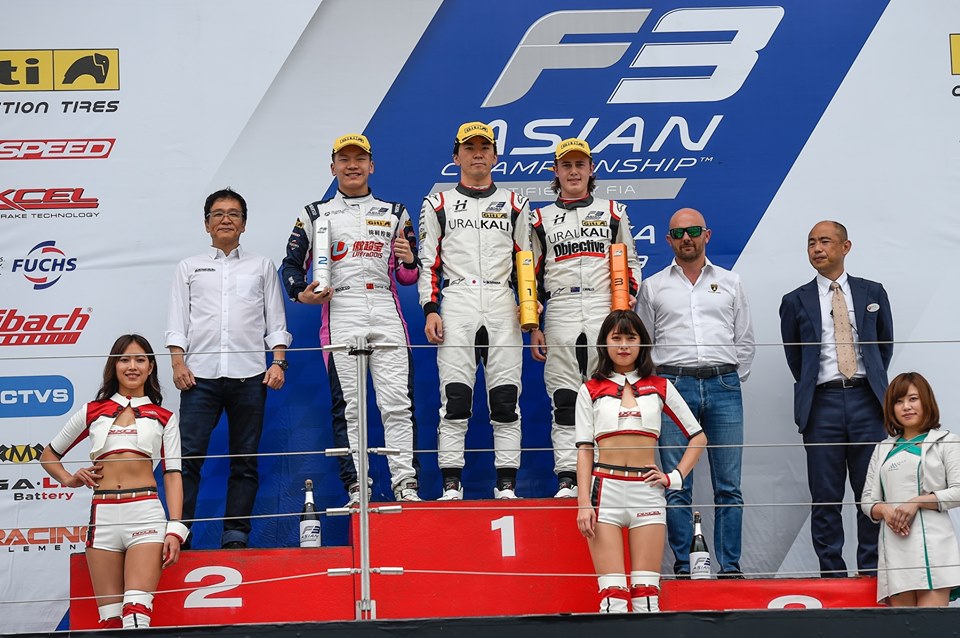 Ptacek made an excellent start from pole as the lights went out for the final time this weekend, with Sasahara giving chase and Fujinami getting by Doohan off the line and moving up to third ahead of Dempsey. Seconds later though, Sasahara dived down the inside of Ptacek to challenge for the lead, locked a wheel and made contact with the Czech. That gave the Japanese driver the lead and dropped Ptacek right down the order, but the incident was ultimately to have even greater consequences for both drivers.

Leitch was again a man on the move, up from P10 to fifth behind Dempsey at the end of the opening lap, the Kiwi ploughing past the Irishman three laps later and in to fourth. Doohan successfully made a move on Fujinami to climb to second, and Leitch was then quick to pounce on the Japanese B-Max Racing Team driver. The pair banged wheels as Leitch barged past and up to third.

Further down the order, Pieris in sixth was expertly holding off series newcomer Walls, ahead of Zen Motorsport’s Yu Kuai and BlackArts Racing’s Miki Koyama.

Ptacek was handed a drive through penalty for a jump start by race stewards, while race and championship leader Sasahara collected the same penalty for his earlier contact with the Seven GP driver. The Czech drove into the pits and retired, while Sasahara unsteadily made it to the pits to change a punctured tire, and then again to serve his drive through penalty, ultimately crossing the line in ninth place.

With Sasahara out of contention, Doohan led the field and resumed his Suzuka Circuit masterclass, expertly negotiating the unforgiving turns with precision and speed.

The last eight minutes were to hold yet more drama as the battle for position between Pieris and Walls intensified, producing some superb high-speed dueling as the clock ticked down to the flag, the pair battling tooth and claw right up to the line.

Having remained in podium contention throughout the race, Fujinami retired on the very last lap. That promoted Leitch to second, giving him his best championship finish so far, and earning Dempsey his first series podium finish. Pinnacle Motorsport’s Tommy Smith was another last-lap retirement, the Suzuka Circuit extracting its toll once again.

In the Masters category, Luedi took the win from championship leader Wong after a strong weekend at Suzuka.

Takahashi was unable to take the start after his unlucky crash in Race 8.

The F3 Asian Championship Certified by FIA continues in September when it arrives at the home of the Chinese F1 GP, the Shanghai International Circuit. Races 10-12 will be held from September 7 to 8, at the FIA Grade 1 track.

Daniel Cao/Absolute Racing/2nd – Race 8
“I had a good start and got up to third position, but Brendon is a good driver and is very fast. We fought for almost five laps, but maybe he made a mistake and I saw he was off the track. Then we had the safety car, which took a little bit of a long time.”

Jackson Walls/Hitech Grand Prix/3rd – Race 8
“The start was OK. I missed my second gear shift which didn’t help at all into Turn 1, but from then on, I just tried to managed the tyres and manage where I was on track and not do anything stupid as I knew I was in a good position. The F3 Asian Championship is really good. My experience so far of the championship has been good, the track time we get is amazing. Just the whole vibe around it is really good and I’m really enjoying it.”

Jack Doohan/Hitech Grand Prix/Winner – Race 9
“It was not the best start. I think conditions were a bit different to race 1, and I just didn’t get the right feel for the clutch and got a bit too much wheelspin. That allowed Fujinami to get past me. Then Ptacek and Ukyo had a bit of contact, and that got me up to third. I definitely had more pace than the car in front and I just had to try to bide my time. Once I got past him, my pace was really good. I tried to just keep on pushing and stretch the gap as much as I could.”