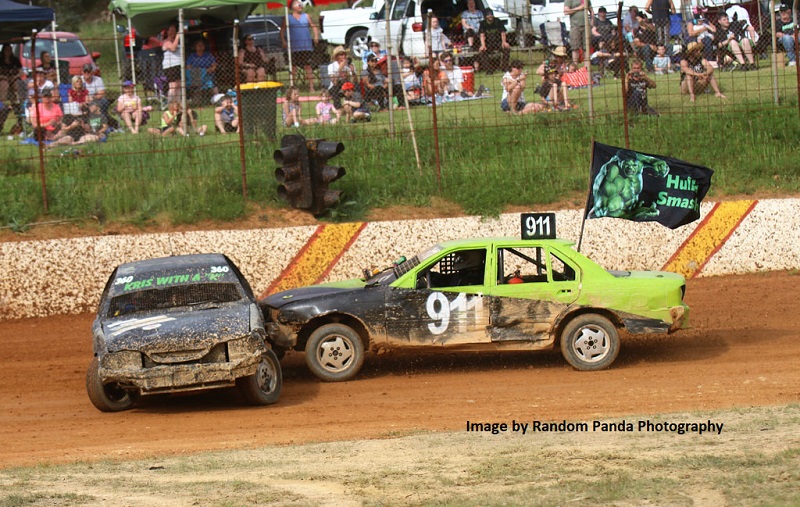 This Saturday night will see the return of the Dog Leg racing season at Alexandra Speedway with the headline class the Crash and Bash leading the club classes in action where the cars turn left off the circuit to make their way down into a purpose built right hand turn before exiting the dog leg to return onto the back straight of the speedway and down into turns three and four.

Crash and Bash cars are allowed to touch each other up a little and they spin, push and shove their way around the track with anybody fair game until the chequered flag unfurls to declare the first past the finish line winner. Often the action by the time racing gets to the feature event involves hard shunts and maybe even a rollover or two at the fast paced and large Alexandra Speedway.

Sports Sedans bring the largest field into the nights action from the local classes with Brendan and Damien Miller leading the charge at the front along with one of the kings of the end of season 100 Lap Derby Luke Fallon. A potentially shared care with Allen Treble and Lenny Bates at the wheel along with Steve Kershaw, Ricky Cornwall, Gareth Wilson and Andrew Jordan gives the line-up a terrific amount of talent looking for bragging rights before Queens Birthday weekend.

Almost twenty Top Star and New Star Junior entrants are also keen to compete with the likes of Chloe Sheerman, Jeremy Gorski, Courtney and Rhys Meakins and Harry Orme in the Top Stars and Dillon Taylor, Luke Cornfoot, Linken Paterson, Jayden Bryant and Dylan Barrow in the New Stars. The up to 1500cc powered race cars driven by 10 to 17 year old racers fly around Alexandra Speedway with no fear, the kids just love the dog leg also. Picking a winner is a tough task on any night these superstars hit the track.

Unlimited Sedans bring ensure a purpose built chassis car battle will be on track with current King of the dog leg Lennie Bonnici leading Darren Forrest, Scott Ellis, Peter Cox, Daniel Unternahrer and Johnny Young into a dog fight. The winning chassis car here is likely to be the one to beat at the 100 Lap Derby in a month’s time.

Street Stocks return with Lenny Bates who recently won the Drouin Street Stock dog leg event the firm favourite although he will need to contend with Andrew Jordan, David Barrie and Belinda McCoubrie who also knows her way around a dog leg circuit as shown in her recent qualifying efforts at Drouin in the Crash and Bash class.

Standard Saloons and state governed Junior Sedan complete the full schedule on race night with racing from 2pm Saturday with gates to the public open from 10am.

Entry is $20 the price of an adult entry and $10 for children aged 10 to 16 and aged and invalid pensioners. Children under 10 years of age enter for free.