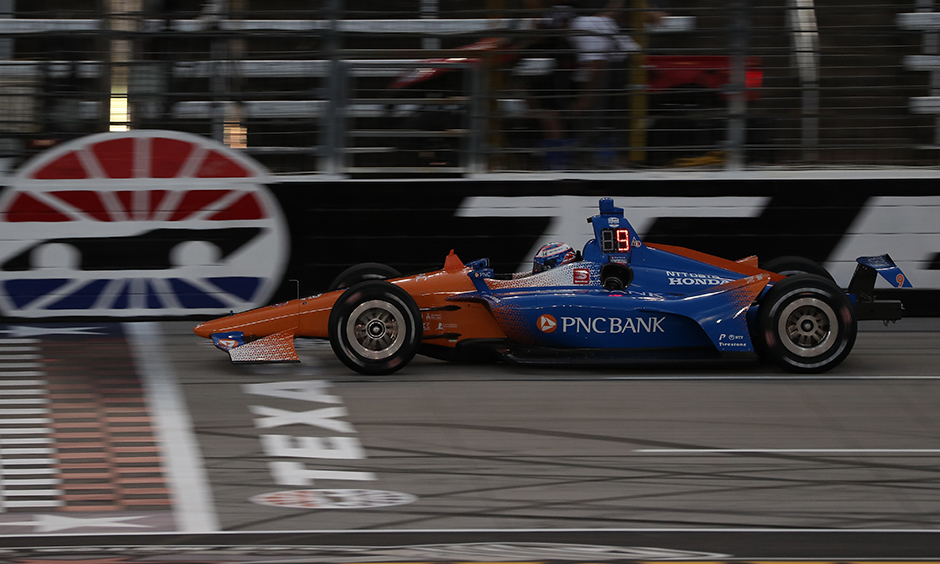 The reigning and five-time NTT IndyCar Series champion turned the fastest lap in the abbreviated practice on the high-banked 1.5-mile oval, at 219.308 mph in the No. 9 PNC Bank Chip Ganassi Racing Honda. The session was limited to little more than 30 minutes of true green-flag practice time, first by a light rain and then by a heavy shower that soaked the facility.

“Unfortunately, we got the weather,” Dixon said. “We didn’t really get to run as much as we would have liked.

“It started OK today,” he added. “(We) had a few issues, I think, with balance. I think a lot of people have (too) just with the added temperature, especially from when we tested here (in March). That was interesting for us.”

Dixon needed only 25 laps to set the fast speed. Only one driver, Charlie Kimball, made fewer circuits (19) in the practice. Drivers will have just one hour of practice Friday afternoon before NTT P1 Award qualifying Friday evening and Saturday’s race under the lights.

Takuma Sato was second fastest of the 22 drivers in Thursday’s practice, with a lap of 219.262 mph in the No. 30 ABeam Consulting Honda for Rahal Letterman Lanigan Racing.

“Tonight, I felt pretty comfortable,” Sato said. “Still (there’s) a lot of work to be done in traffic. I was obviously looking forward to a little bit more traffic runs, go through the (full) stint, (see) how the balance shift will be. But obviously with the rain, we cannot do anything at the moment.”

Dixon, who won Sunday’s second race of the Chevrolet Detroit Grand Prix presented by Lear doubleheader, is a three-time winner at Texas. Other past winners on the oval entered this weekend are Graham Rahal, who was third in Thursday’s practice (218.311 mph); Will Power, fifth in practice (217.196); and Ed Carpenter, 10th in practice (216.653).

Saturday’s race will be the 31st for the NTT IndyCar Series at Texas, dating to when the facility opened in 1997. Race coverage commences at 8 p.m. on NBCSN and the Advance Auto Parts INDYCAR Radio Network.