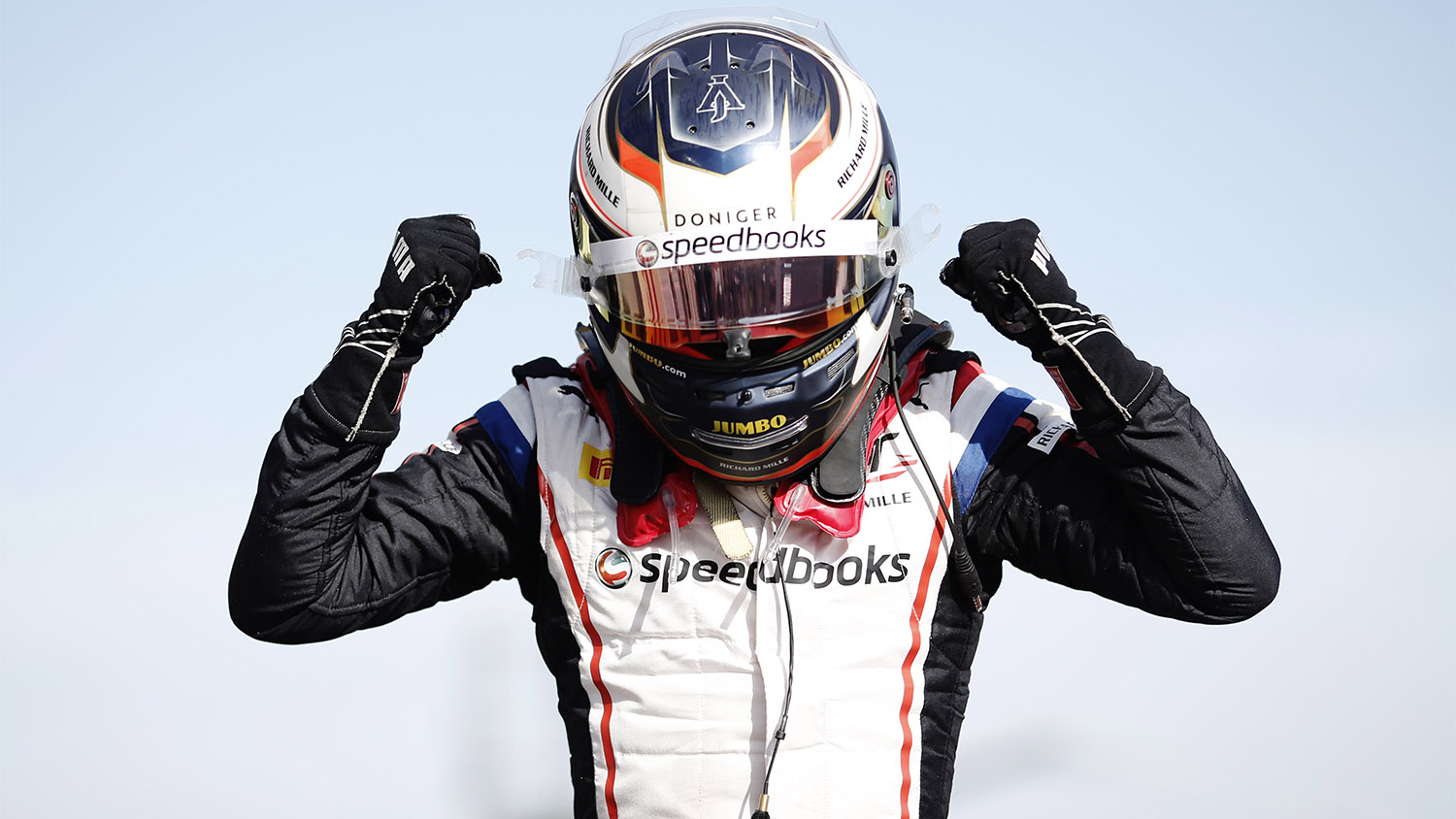 Nyck De Vries made light work of a fourth place start to make it three race wins from four and take the FIA Formula 2 Championship lead in France. The ART Grand Prix man’s hot streak of form continued in Le Castellet as he rose to first when the lights went and retained the position at the chequered flag, to finish ahead of poleman Sérgio Sette Câmara and Jack Aitken.

The Dutchman made a superb move off the line to fly around the right of Guanyu Zhou and Sette Câmara ahead of the first corner. Aitken made an identical move down the left, but came out just behind his Championship rival in second, with both moves sticking going into Turn 1.

Sette Câmara and Zhou were denied an immediate chance to react as a red flag swiftly brought a halt to proceedings after Sean Gelael caught the curb on T1 and sent his PREMA teammate Mick Schumacher soaring into the air and flying across the chicane, ending both of their races. Meanwhile, Nikita Mazepin and Ralph Boschung came to blows as well and stopped on track, which ended in retirement for both drivers. In the same chaotic period, a fifth retirement came in the shape of Dorian Boccolacci, whose home race ended in heartbreak when he stopped on track.

When racing resumed De Vries held onto his position and left the Campos man behind him to battle with Sette Câmara. The front seven were all on the option tyre and it was the duo in P2 and P3 who ducked into the pits first, leaving De Vries to build up a lead for one more lap.

When the Dutchman did pit, he came out behind Aitken, but any fears his strategy could cost him were swiftly alleviated by a stunning overtake on the mistral chicane. On the opposite strategy, Luca Ghiotto was handed P1 but building up a big enough lead to make it stick would be a mammoth ask.

With the Italian attempting to increase his gap at the front, De Vries and Aitken were making their assault back up the field and fast gaining momentum, having both swept past Mahaveer Raghunathan.

Meanwhile, behind them Callum Ilott pulled off what was arguably the move of the race, when he swept past Nicholas Latifi around the chicane. His hard work was all undone shortly after as he attempted to claim another position from Nobuharu Matsushita: the Briton got side-by-side with the Japanese driver but was forced to pull away when he ran out of track, hit the curb, and spun onto the gravel.

Further risky moves ensued elsewhere on the field as Sette Câmara attempted to pass Aitken and like Ilott, ran out of track – he was forced to run over the chicane and would have to wait for his chance.

Race leader Ghiotto managed to build up a 19s gap, but with tyre degradation and De Vries gaining momentum, the Dutchman began to take chunks out of this time. The UNI-Virtuosi man pitted with eight laps to go and returned in fifth, leaving just Jordan King – also yet to pit – ahead of De Vries.

King eventually handed over P1, but a lightning fast pit stop from his MP Motorsport team returned him in 7th, having begun the race in 16th – an overtake on Luca Ghiotto, who had recently been passed by Latifi, later gained him a further place in P6. Shortly after, there was further disappointment for the Italian when Juan Manuel Correa caught his right tyre and slung him off the track, resulting in a retirement.

With the obstacle of King’s MP Motorsport machine out of the way, De Vries quickly went about stretching his lead and soon held a 7s advantage over his rivals, which left Aitken and Sette Câmara to jostle over second and third. Aitken suffered a momentary wobble on Turn 8 and managed to recover and cling onto P2, however, the Brazilian was merely biding his time. The opportunity arose on the following lap and he flew past the Campos driver on the pit straight in a DRS powered move.

It remained the same as they crossed the line, with De Vries claiming another win and the Championship lead, ahead of Sette Câmara, Aitken, Zhou, Latifi, King, Correa, Anthoine Hubert and Matsushita. Giuliano Alesi completed the top ten to score his first point in F2.

De Vries now leads the standings, with 121 points, 16 ahead of Latifi in second place. Aitken is in third with 77, followed by Sette Câmara on 74 and Ghiotto on 67 points. DAMS lead the teams’ standings with 179 points, 46 points ahead of UNI-Virtuosi racing. ART Grant Prix are third with 127, ahead of Campos Racing on 107 and Carlin on 62.

There will be a Frenchman on reverse grid pole in the Sprint Race when Hubert lines up at the front of the pack tomorrow, at 11.25am local time.