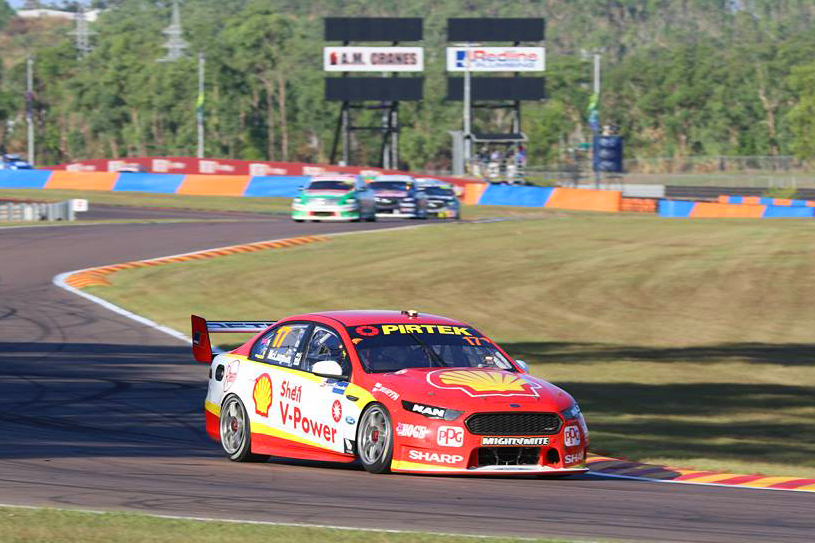 Scott McLaughlin extended his lead in the Virgin Australia Supercar Championship with victory in race 15 at Darwin this afternoon. Mc Laughlin survived a late challenge from Shane vanGisbergen after using the undercut to take the lead from pole sitter David Reynolds. (Photo: Matthew Paul)

The Erebus team had scored a historic 1-3 in qualifying after Reynolds took advantage of better track conditions early in the session to record a time that proved to be impossible to beat on the day. It was Reynolds first pole for the Erebus outfit and he admitted that the key to a good qualifying lap was to set a fast time as soon as the session started. He explained that the Michelin shod Carerra Cup cars, that had run just prior to the Supercars, left a good amount of rubber on the track and drivers just had one chance to exploit the extra grip level before the advantage dropped away.

“We know when the Porsche rubber is down you have one lap to do it and it’s kind of toast after that,” Reynolds said.“I threw everything I had at it and it stuck. The car was pretty good, thanks to all the boys, they put in the hard work last night to change the set-up a bit. Even Anton is P3, which is a phenomenal job for him. As a team, we’re super rapt.”

Scott McLaughlin split the Erebus drivers and sat out the final six minutes of the session, convinced that he had completed the best possible lap in his DJRTP Shell V Power Ford.

Rick Kelly finished 4th after he had topped the time sheets on day 1. Shane vanGisbergen was the best of the Triple 8 cars in 5th, just in front of teammate Jamie Whincup. Andre Heimgartner headed Scott Pye and Michael Caruso, with Will Davison 10th. Mark Winterbottom headed the Tickford cars in 16th, from Mostert and Waters, in what was turning into a difficult weekend for the Ford team. Macauley Jones finished in 25th place after the BJR crew worked to repair the damage encountered in his P3 crash.

David Reynolds had the benefit of the inside line as the lights went out to signal the start of the 47 lap race. McLaughlin ran alongside for a while then backed in behind the Erebus car to protect his place as Rick Kelly moved to the inside of the corner to pass Anton De Pasquale. That was the only change amongst the leaders on the opening lap as the midfield fought to for position. Reynolds locked a wheel shortly after under pressure from McLaughlin but maintained his lead until the pit stop cycle began. Mark Winterbottom was an innocent victim in a clash between James Golding and Cameron Waters. Golding tapped Waters, which put the Monster Energy Ford sideways and into the rear quarter of Winterbottom, who then spun the Bottl-o Falcon Macauley Jones and Scott McLaughlin were just some of the driver to run wide at turn 1, although Rick Kelly was unable to capatilise on McLaughlin’s error. Craig Lowndes was steadily moving towards the top 10 while Will Davison was heading in the other direction and dropped to 14th.

As drivers looked to take their pitstops, Shane vanGisbergen stepped up the pace to run his quickest lap of the race in an attempt to gain positions in an undercut. Rick Kelly was amongst the first to stop as was Jamie Wincup and Craig Lowndes. Kelly and Whincup almost collided as the Nissan launched past the Commodore as Whincup looked to exit his pit bay, Kelly just managed to head the reigning champion to the pit exit. Scott McLaughlin responded a short time later. The Shell V Power Ford maintained its advantage over the Nissan. Kelly moved inside McLaughlin at turn 1 as the Ford driver cautiously brought his tyres up to temperature. McLaughlin ran side by side with Kelly around turn 1, which gave him the advantage at the exit and he stayed ahead. Pasquale also stopped at the same time and resumed behind Kelly.

The decision to stop Reynolds later worked against their driver as he resumed behind Kelly, Whincup, Lowndes and vanGisbergen. Jamie Whincup made a move on Kelly on the run to turn 5, only to lose out when Kelly ran wide at the corner. This put Whincup off the racing line and he was swapped by vanGisbergen, Lowndes and Reynolds on the run to the hairpin. Shane vanGisbergen moved inside Rick Kelly at turn 1 with the advantage of fresher rubber than the Nissan driver. Reynolds also passed Kelly and set out to run down McLaughlin, who had skipped away to a handy lead. Shane vanGisbergen closed to within a few tenths as the laps counted down but could not get close enough to mount a successful challenge.

Scott McLaughlin won from Shane vanGisbergen and David Reynolds. Scott Pye was 4th, from Garth Tander, Rick Kelly, Craig Lowndes, Jamie Whincp, Nick Percat and Michael Caruso, who rounded out the top 10. Anton DePasquale dropped from 3rd on the grid to 11th at the finish, with Cameron Waters the best of the Tickford entries in 12th.

“I’m glad I didn’t have a heart rate monitor on, I would have blown the thing off the scale!” exclaimed Scott McLaughlin. “Thanks to everyone at Shell V-Power Racing Team, they put a lot of faith in me to bring it home today, and thankfully I did. I wanted that win really bad to repay all the hard work the boys have been doing behind the scenes, and for it to be the 100th win for the team makes it a really great day.”