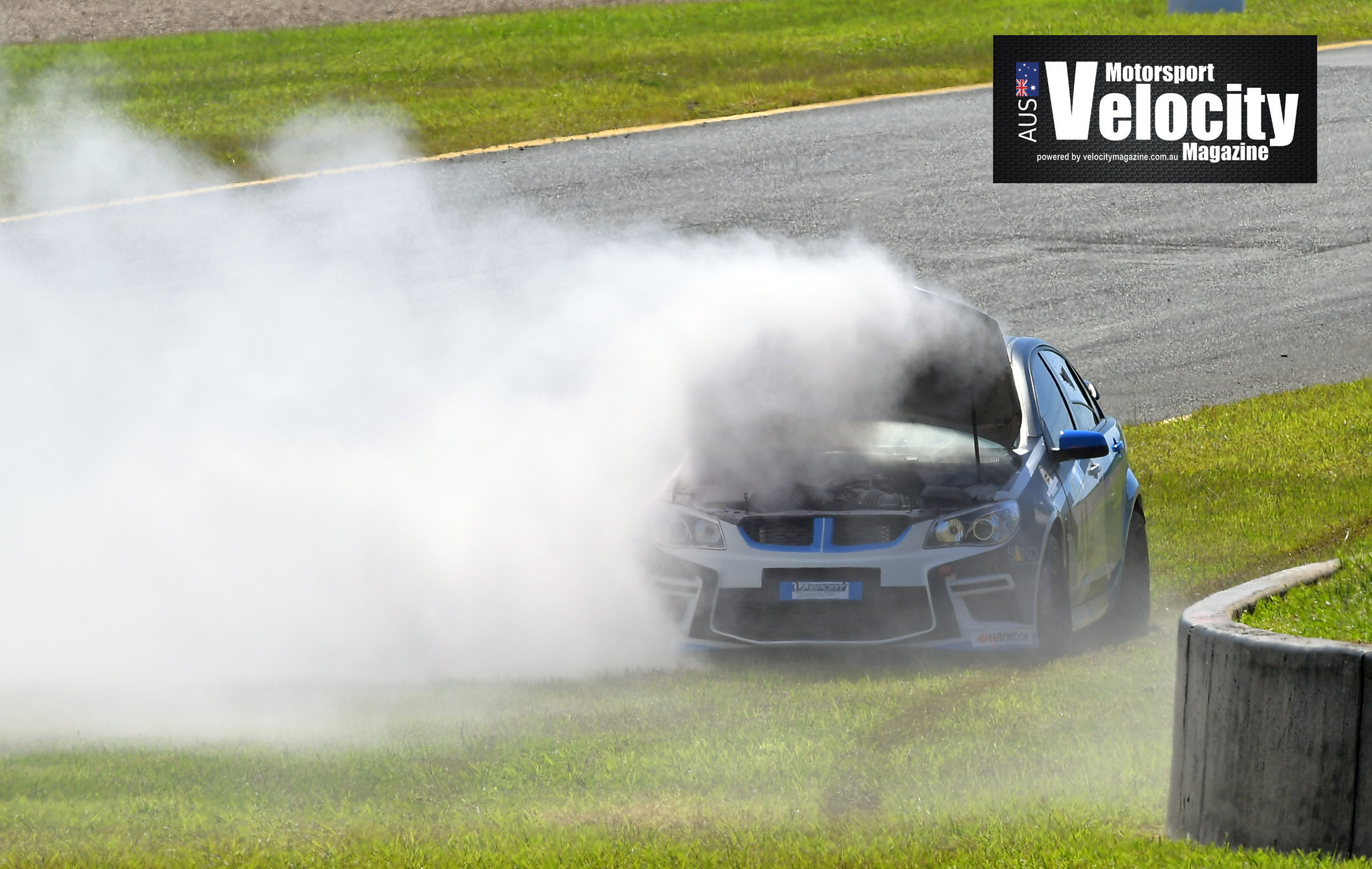 Saturday began under a haze of grey skies and list fog, a far cry from the showers that swept across the area on Friday, though not the promised blue sky and high 20 degree temperatures that had been promised. The combination of short qualifying periods and a drying race track meant that the little track time available was often compromised during the morning by red flag situations which had a flow on affect for the grid positions for the first races that afternoon.

Supersports were scheduled for Saturday only, with 3 races held in quick succession across the afternoon. David Barran won the first race in his Chiron LMP3 from Neal Muston and David Barlow, while Muston took the win in race 2 from Barlow and Mark Laucke after Barram stopped on lap 3. Barram was also a non finisher in the final, stopping on the penultimate lap as Barlow won from Muston and Laucke. Nick Kelly recovered from a dnf in race 2 to finish 4th.

Zac Soutar trailled Thomas Sargent for almost the entire distance in the first race for the NSW Formula Ford Championship, which also doubles as the opening round for the National title. Sargent looked to have run the perfect race only to see Soutar snatch the victory on the last lap. Callum Hedge managed to claw his way through a tight pack of cars to finish as the best of the Sonic entries in 3rd, ahead of Jay Hanson, Cody Burcher and Courtney Prince and Angelo Muzouris.

Ben Bargwanna finished in 8th and Hank Perkins 15th as both Lachlan Mineef and Jake Donaldson fell down the finishing order after post race time penalites were applied to the pair.

A small field of 13 Formula Vees entered for the round, though Craig Sparke, Jason Cutts and Aaron Lee produced an entertaining race for the top 3 places. The trio eventually finished in that order after a series of lead changes throughout the duration of the 10 lap race.

The first round of the NSW Sport Sedan Champion was also a National event, with Tony Ricciardello once again the race winner. The ‘Red Barron‘ led from the start and easedaway to a 9 second win from Grant Doulman and Steven Tamasi. Jordan Caruso lasted barely a lap in the Auto Union Deutsche Audi A4, while Fred Geissler, Jeremy Mapp and Matthew Ingram were the other retirements in the race.

Trevor Spiteri won the opening race for the combined Improved Production race for Under Over 2 litre cars from Michael King and Graeme Watts. Spiteri’s Mitsubishi Evo 6 won by 4 seconds from King’s Evo 8, with Watts a further 2 seconds behind in 3rd in the 40 car field. Mark Tutton. Matthew Lamour, Bruce Henderson, Michael Hazelton, Shad Hassen, Bryan Van Eck and Peter Woods were the only retirements in an often crowded and hectic race.

A field of 21 HQ Holdens started the first race of the weekend and Chris Molle and Brett Osborn continued their fight for supremcy in the category. Osborn and Molle, the number 1 and 2 plate holders battled for the win. Molle managed to scrape out to a 1 second lead which he held to the finish over Osborn, with Tyrepower sponsored Scott Walker in a lonely 3rd, 6 seconds behind Osborn and 4 seconds clear of Glenn Deering.

Tony Virag won the opening race on the NSW Production Touring Car Championship by just under a second from Jimmy Vernon, with Vernon’s Mitsubishi sandwiched by Virag and Matthew Holt in a HSV sandwich. Anthony Soole finished 4th in the Property Investment Store BMW M4 in what is a final shakedown for the car before the Hi Tec Oils Bathurst 6 Hours in a few weeks time. Jamie Hodgson and Edan Thornburrow both retired on lap 3, as 25 of the 27 starters made it to the finish.

Grame Holmes won the first race in the NSW Formula Car Championship from Aaron McClintock and Phillip Morow. Greg Muddle, Robert Sviderskas and Glenn Lynch all retired from the 10 car field during the course of the race.

Superkarts replace Supersports on the Sunday program as all the other categories run two more races across the day.

Tony Ricciardello took a clean sweep of wins at SMSP in the Sport Sedan Championship round from Steven Tamasi in the Calibra and Steven Lacey in the Chev Camaro. The red Alfa was untouched throughout the weekend as Ricciardello took and early lead and then drove away from the rest of the field.

It was a very different story in the Formula Ford Championship round. The three races saw three different winners. After Zac Souter won the opening race on Saturday as Thomas Sargent slowed in sight of the chequered flag, there was no such repeat in race 2 as Sargent took his first win of the weekend. The final looked to be a repeat of the previous races with Souter and Sargent battling for the lead.

Callum Hedge was able to climb up towards the leading pair as the field began to spread out. He took the race to Sargent when Soutar dropped down the field as the Team Souter Motorsport driver hung on to 14th at the finish. Hedge managed to get past the #47 CHE Racing Team Mygale and just held on for the win in a final dash down the main straight to the chequered flag. Angelo Mouzouris took 3rd from fellow Sonic driver Courtney Prince in 4th. Sargent won the round from Souter and Hedge.

Jimmy Vernon won the two Production Car races, with Michael King and Matthew Holt rounding out the podium in the final race. Tony Virag’s day ended in a plume of smoke from turn 1 to the marshal’s post at turn 2 as the HSV burnt oil continued to smolder from under the bonnet.

King backed up to win the Improved Production Car final from Trevan Spiteri and Peter Ingram. Chris Molle won the final race in the HQ Holden category from Brett Osborn and David Proglio, while Graeme Homes won the NSW Formula Round.