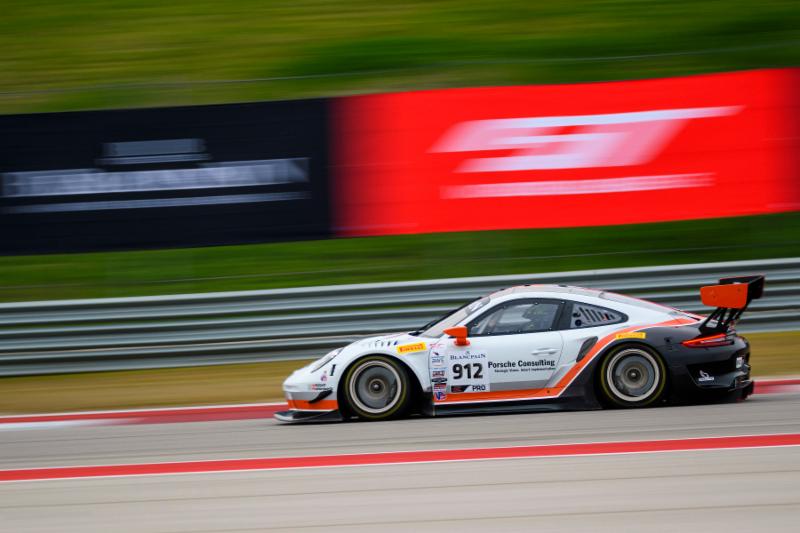 Wright Motorsports has confirmed their return to the Intercontinental GT Challenge Presented by Pirelli’s California 8-Hours next week at WeatherTech Raceway Laguna Seca. With the support of Porsche Motorsport, the Ohio-based team will field the No. 912 Wright Motorsports Porsche 911 GT3 R entry for recent Bathurst 12 Hour victors, Matt Campbell [Australia], Dennis Olsen [Norway], and Dirk Werner [Germany].
“I’m very proud to be heading back to the California Eight-Hours with the support of Porsche Motorsport for a third year,” said Wright Motorsports Principal, John Wright. “In 2018 we gave Porsche their best IGTC finish of the season with a fourth place, but we still have some unfinished business to tend to, so we’re eager to fight for the win with the new Porsche 911 GT3 R.”
“We have all of the tools we need to do so with the manufacturer’s support, a strong driver lineup, and a very experienced group of crew members. This event always brings out some of the best in global competition, but we’re prepared to do what it takes to help Porsche continue what they started at Bathurst and extend their championship lead.”
The California Eight-Hours will see the continuation of Porsche’s effort to place their factory supported IGTC entries with deserving customer teams. It started with Round 1 at the Bathurst 12 Hour, when a last-minute maneuver by Campbell earned the victory for Earl Bamber Motorsport. Round 2 has the two Porsche entries split between the John Wright-led team and Park Place Motorsports, who will make their series debut with the No. 911 Porsche 911 GT3 R.
“The Intercontinental GT Challenge’s California 8-Hour race, now it its third year, has been growing in importance and stature with each visit to Monterey’s WeatherTech Raceway Laguna Seca,” said President and CEO of Porsche Motorsport North America, Daniel Armbruster. “By having Park Place Motorsports and Wright Motorsport represent Porsche, we are assured of two well-prepared 911 GT3 R race cars, by two of the best managed teams in racing. I am encouraged to see the event continue to grow in the Unites States, as the customer team focus is an important part of our philosophy at PMNA.”
Porsche Young Professional Drivers, Olsen and Campbell will be taking on the 3.602-mile road course for the first time. The two – who are set to split driving duties with Wright Motorsport’s Anthony Imperato throughout the SRO America season – both have experience driving the new Porsche 911 GT3 R in endurance competition and have proven that they know what it takes to adapt to new territory.
Hailing from Germany, Werner will return for his second consecutive California 8-Hours with the Wright Motorsports team. Not only does he have experience with the new Porsche 911 GT3 R, but the factory driver has seen four podiums at Laguna Seca and will be on the hunt for his first top slot come next Saturday.
“We’re delighted to contest the second round of the season with our experienced American customer teams,” added Porsche 911 GT3 R Project Manager, Sebastian Golz. “Wright Motorsports and Park Place Motorsports are very familiar with the quirks of the Laguna Seca racetrack. Entering the famous Corkscrew, our drivers will be able to brake very late with the two Porsche 911 GT3 R vehicles. If you’ve ever looked at onboard footage of this passage, you’ll know just how spectacular it’ll be. With our new GT3 race car, we want to continue where we left off in Bathurst.”
The Intercontinental GT Challenge’s California 8-Hours at WeatherTech Raceway Laguna Seca will take off on Saturday, 30 March, at 8:30 AM PT. The race can be streamed live at www.intercontinentalgtchallenge.com
Matt Campbell – It’s really exciting to be going into Round 2 leading the championship. It will be a new and exciting challenge for us because we’re going into the new car and we’re joining Wright Motorsports. I already know the Wright Motorsports team and the layout of the circuit. There are a lot of elevation changes with big breaking areas. It looks very challenging, so I think with an eight hour race it will be really tough on the cars and a great equalizer between the manufacturers. We’re hoping we can continue what we started into Laguna Seca.”
Dirk Werner – ” After our win at the season-opener in Bathurst, we’d now like to do it again at round two in Laguna Seca. Itwill be great to race with Wright Motorsports again. They are a very professional team with great people and a wealth of experience. I expect the new Porsche 911 GT3 R to handle really well at Laguna Seca, since the track layout should favor all the strong points of the car. And I always enjoy driving this track, so it doesn’t get much better than this.”
Dennis Olsen – I’ve never raced at Laguna Seca, so I’m really excited to get the first laps in and get the flow and feeling for the track. It’s seems like a challenging track and there are a few places which are quite impressive— like the significant elevation differences and legendary turns like the Corkscrew. The new car should be better and is also more drivable which makes it a bit easier from a driver’s point of view. I know the Wright Motorsports squad and I’m certain that our car will be really fast.