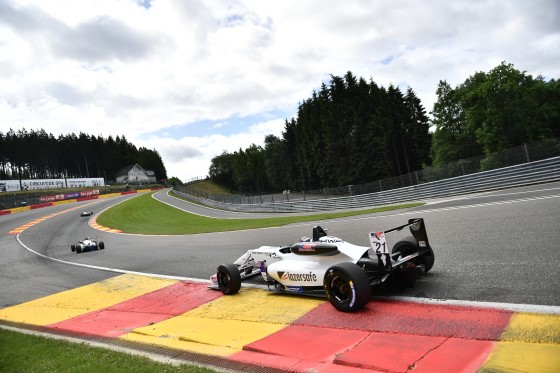 This morning commenced with Qualifying 1 to set the grid for race 1. Here at Spa with the exceptionally long straights, the effect of gaining a tow, or slipstream behind a car or ideally train of cars is extremely important. The difference can be around 1.5 seconds a lap which is likely to be the time covering the majority of the 21 car field. Therefore there are a great deal of tactics involved.

For the first set of tyres in the session I managed to find a good place in a group of cars and executed my laps well putting us around P6 at the midway point.

After an excellent quick pit stop by the team to change to my second set of tyres, I headed out with a nice long train of cars ahead of me which was ideal. Unfortunately someone in the middle of the group was not quick enough to hang on meaning that all of us lost touch. Here I then had to quickly make a call whether to stay with a likely slower group, or find another.

I decided to drop back and soon picked up another train of cars, not as big a group as would be ideal but I had found a space. Again I executed pretty well and posted a time of 2:11.8 to put me P12 on the grid. Again times were very close, and given the impact of a tow here, I think I delivered well with the situation I had.

Race 1 off the line was, not my best launch, but not too bad either. There had been a few spits of rain at different parts of the circuit making the surface quite slippery. Through the majority of the first lap I battled hard, survived one run wide after attempting an overtaking manouvre around the outside of turn 5 and help my position ok. Coming into the last chicane however I had a large lock up and had to run very deep off the circuit into the run off area. After having to turn back on myself to get around the final wall, I was then down in P18.

From here I was very pleased with my race to recover. I was able to make a number of good moves to move up through the field. The best was a move on French driver Pierre Louis Chovet who I managed to take up the outside through Eau Rouge. Won’t forget that for a long time!

At that point I was up to P12 and catching P11. He however was also catching P10 and once he reached them and was able to gain from a tow I could make no further progress forward even though I continued to extend my lead from those behind.

Overall a positive race, with the gains now to be made in qualifying for Race 2 to ensure I am in amongst the lead group here.