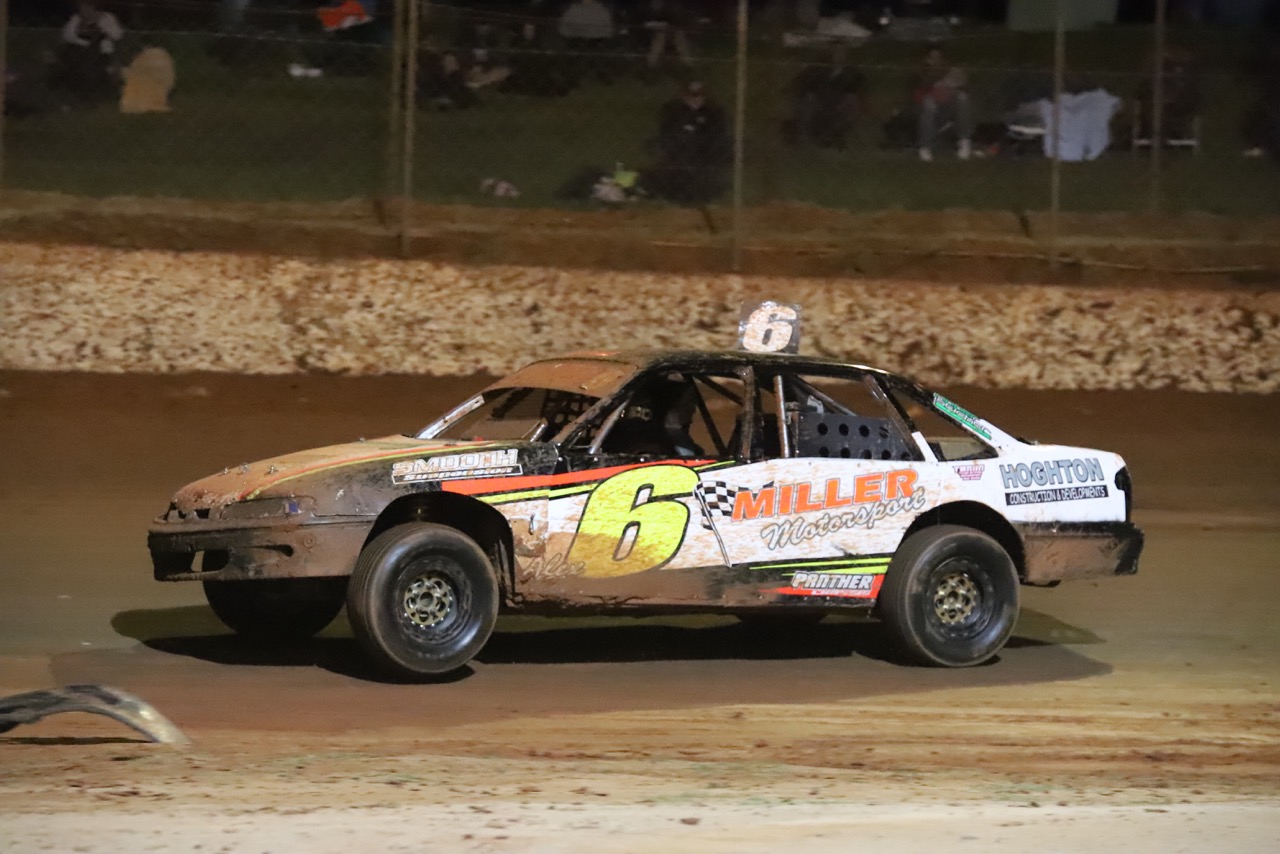 A massive forty seven events took place at Nyora Raceway on Saturday April the 13th culminating in a twenty four lap Robert Bickham Memorial for Sports Sedans to top off the show and send the fans home happy with a win to a driver Bickham absolutely loved to watch go racing, Brendan Miller.

On an emotional night, it all began with the event announcer making a remembrance speech about Bickham and a heartfelt message to Teahn Murrell doing it tough with her own fight against cancer, the disease that took Bickham from us. Drivers then consoled each other and took photographs in field together before the race action turned everybody’s attention to what we all love.

The Sports Sedans competed across nine heat race events with each driver entered in three to build up qualifying points that determined their start positions in the twenty lap final, twenty four laps because that was the race number that Bickham ran as a Nyora club member before his passing.

Action in the feature event pitted brother versus brother as Damien and Brendan went at it throwing everything at each other including the race shed bar fridge, whilst they were going at it Paull crept up behind them and got close at times before the boys created enough space for them to maintain their positions. Dale Morrison battled with Bourke for fifth and sixth and Bent had a good hold on fourth for a long time before Bourke got the better of Morrison then Bent.

When the chequered flag dropped Brendan Miller had taken the first ever win in the event from his brother Damien, Paull, Bourke and Bent and the emotions once again came out with celebration and presentations.

The moment got the better of the Miller lads who paid their respects to Bickham. “We miss him and think about him all the time. We know he just loved the way we race and the equipment quality we put out on the race track and winning the first ever event with my brother finishing behind me means so very much to us both.” Shared Brendan.

The Memorial was supported by Bickham’s great mate Russell Hill from Ramsdale Wreckers who put up some prize money towards the event and BGN Auto Glass who contributed to a pole shuffle won by Damien Miller.

Eight other classes also competed on the night with the Grand Prix Midgets running their South Gippsland Shootout event. Jason Crawford was just being challenged late in the race by Chris Fowler and then Danny Stainer; however Crawford took the win with Stainer, Mark Blackeby, Travis Florrimell and Sean Denning the top five finishers.

Butch Hutchinson took a terrific win in the Compact Speedcars to strong for John Unwin, Brad Day, Louis Rodriguez and Tania Hallett and in the Ladies Standard Saloons Ashlee Wilson was too quick for the field winning ahead of Hayley Hutchins, Allana Ardley, Molly Johnson and Vicky Price.

Cameron Dike won the Division 2 Hot Rods hitting his mark on his turn one entry each and every time and extending his lead lap after lap. Second was Leigh Burkett, Scott Angus was third then Rob Tatterson and Jake Van den Brand.

In Standard Saloon racing Mark Miles with a stock standard engine out of a car sitting in the paddock growing weeds, won the feature ahead of Neil Ingram, Brendon Miles, Justin Hutchins and Matt Reddecliffe.

Lewis Williams passed Victorian champion Rhys Lansdown and had a strong feature win in the Junior Standard Saloons with Lansdown, Jack Yeomans, Kacey Ingram and Deegan Benson rounding out the top five and in Unlimited Sedan action Trent Susol won the final in his Camaro before flying back to Western Australia Sunday afternoon to go back to work. Warrick Taylor was second with Darryl Nicolson, Brian Simon and Johnny Young the top five finishers.

Finally closing out the night in the Speedway Sedans Australia Top Stars was Todd Atkins picking up the win in front of Todd Moule, Chloe Sheerman, Bree Simpson and Harry Orme whilst in the New Stars the win went to Dillon Taylor who out gunned Jayden Bryant, Dylan Barrow, Logan Mair and Luke Cornfoot.

Nyora Raceway returns on May the 18th with the Wingless Sprints and a huge Demolition Derby as the main events.