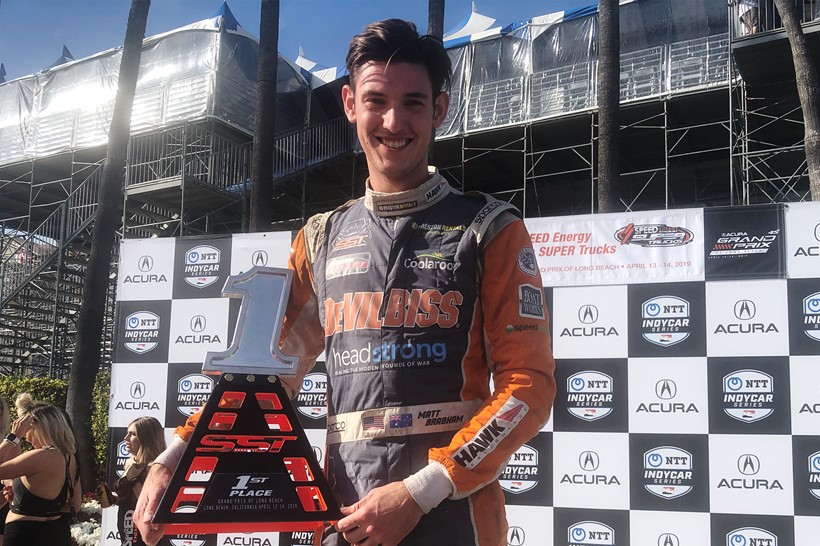 The 2018 Stadium SUPER Trucks champion, Matt Brabham has done the triple at Long Beach this weekend, winning the round for a third consecutive year.

The Australian who divides his time between the Gold Coast and Indianapolis, continued his Long Beach dominance in Stadium SUPER Trucks this weekend with a hard-fought win in race one, which he backed up with a second-place finish in race two.

Starting from the rear on the reverse grid in his #83 Carlisle machine in race one, Brabham made up three positions in the first lap before quickly putting himself in podium contention.

Brabham spent most of this time before the first competition caution arguing with Blade Hildebrand over second place, eventually winning out as the caution was called.

The 24-year-old  then put race leader Sheldon Creed on notice as the field bunched up under the caution.

The lead of the race went back and forth between Creed and Brabham for the remaining laps, eventually with Brabham getting through and stretching his legs a bit over the two-time series champion.

Brabham led the field to the chequered flag, with Creed hot on his heels, followed by Jeff Hoffman. Today’s second race saw much of the same with Brabham charging through the field and coming head-to-head with Robby Gordon. Gordon eventually won out but the two enjoyed a back and forth for most of the end part of the race.

Backing up his Stadium SUPER Truck duties on the weekend Brabham made his debut in the Pirelli GT4 America series. He joined CRP Racing in their newly Carlisle liveried Porsche Cayman for the round.

The Indy 500 starter came across the line in a respectable eighth after a late call up to race last week. The next scheduled round for the Stadium SUPER Trucks is at Mid-Ohio, where they’ll be joining the IndyCar series again on the weekend of July 16th-28th.

WHAT MATT HAD TO SAY…

“It’s great to come away from Long Beach with another win,” said Brabham.

“Race one was probably one of our best ever races. Sheldon and I were side by side for about 5-6 corners. It was just awesome racing.

“In race two I was able to come through the field and Robby and I were just swapping back and forth before he got me on the last lap.

“It was good to get out in the GT4 this weekend, but it was a tough outing in the older spec car. We were fast in the corners but lost speed down the straights. I was able to get to 5th or 6th in the race before I was just swamped down the straight.

“Racing in GT4 was an awesome opportunity thanks to Carlisle and I was very proud to carry Carlisle and their charity HeadStrong Foundation on the Porsche and my truck this weekend.

“It was awesome to take both Carlisle and the Headstrong Foundation on the podium with me in Stadium SUPER Trucks.”