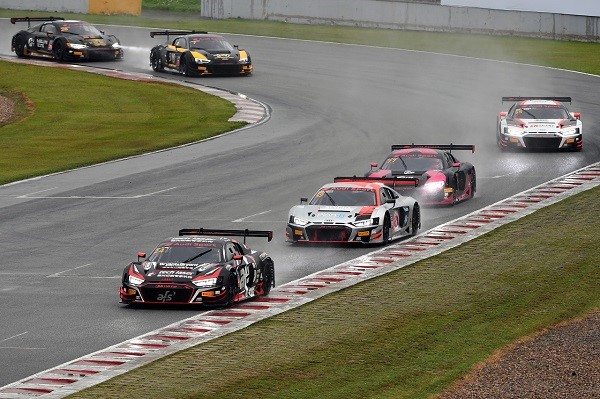 Tony Bates has rated his first overseas racing experience as an awesome adventure, despite another luckless day in Round 4 of the Audi R8 LMS Cup at Zhuhai International Circuit today.

Following his top-three qualifying performance yesterday, Bates went one better in this morning’s session, planting the Moveitnet/Local Roadways/C-Tech Laser/AFS/Bryant & Bryant Audi R8 on the front row of the grid, with a time just 0.04s off pole.

“The car was really hooked up in qualifying, the Absolute Racing crew did a sensational job of fixing the damage from my incident yesterday,” Bates said.

Come race time, the Zhuhai track was saturated by a heavy rain shower; a pre-race problem for the polesitter left Bates with the front row of the grid all to himself. He took advantage and powered to an early lead.

“When it started raining, I knew it was going to be a challenge – I had never raced the Audi in the wet before – but my pace at the start was good and I was pulling away,” he said.

Bates’ lead was demolished when the Safety Car was deployed, and at the restart his race unravelled.

“To be honest, I didn’t maintain enough tyre temperature and I lost the lead when the race restarted,” he said.

“Then I hit a puddle in one of the fast corners and spun off the track. The gearbox wouldn’t engage, and by the time I found the override switch, I had been lapped by the race leader, which ruined my chance of recovering any positions.”

Despite the setback, Bates still salvaged a seventh-place finish, and has maintained his top-three position in the championship. He is focusing on the positive aspects of the weekend.

“Even though we didn’t get the results to show for it, our qualifying pace was very strong considering I had never raced at the track before,” Bates said.

“The overall experience was awesome; the camaraderie between competitors is very good and I can’t speak highly enough of the professionalism and organisation of the series; it’s absolutely top-notch.

“I know we have the speed to win races, and I’ll be working hard on the simulator to learn the remaining tracks on the calendar.”

The next two rounds of the Audi R8 LMS Cup will be held at the Shanghai International Circuit, 1-2 June.