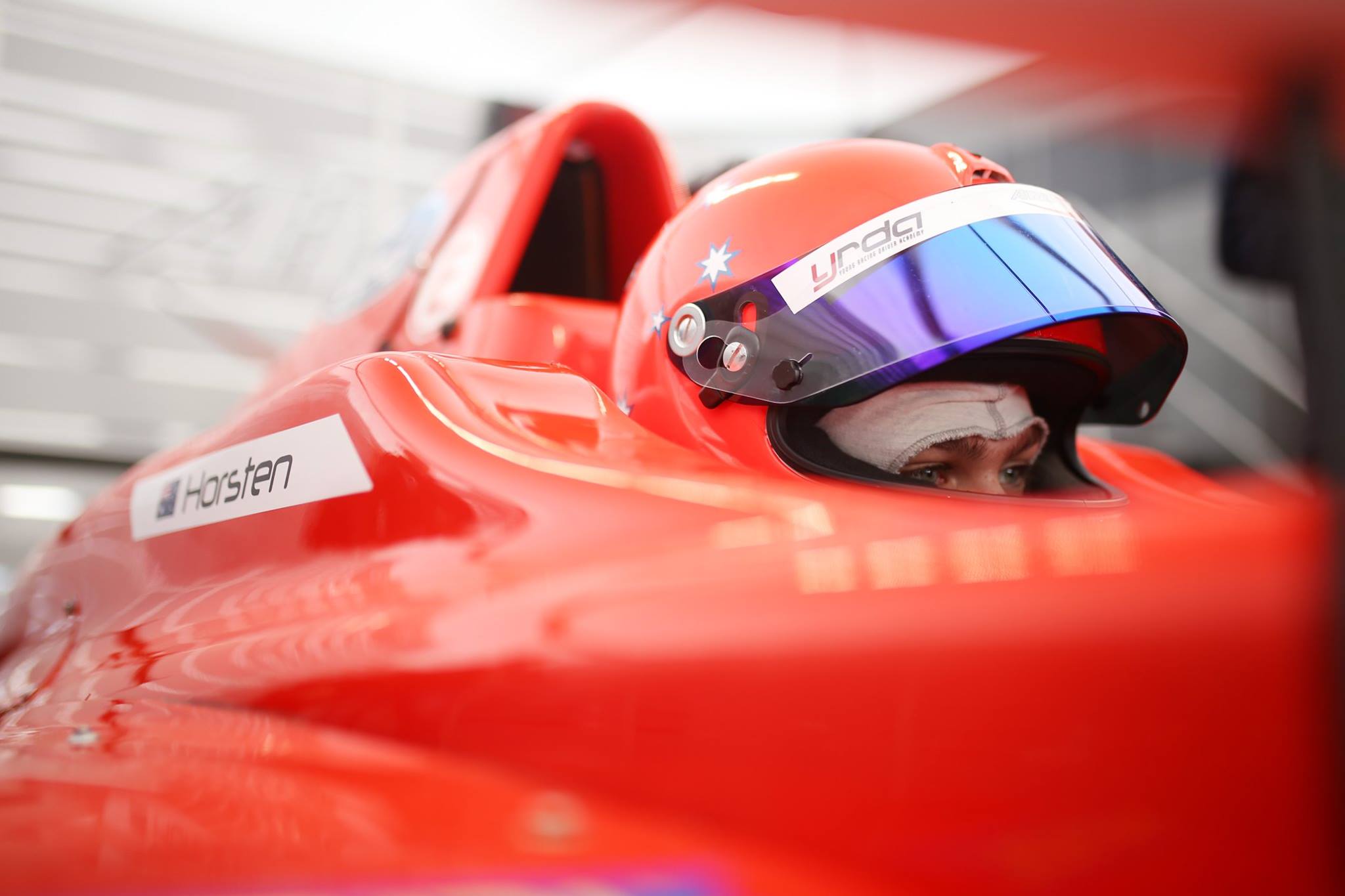 Bart Horsten took his maiden victory in the F4 British Championship certified by FIA – powered by Ford EcoBoost in an action-packed reverse grid race at Donington Park to launch himself back into the frame at the sharp end of the championship standings.

The Australian managed two safety car periods and two red-flag periods to take Arden Motorsport’s first win of 2019 in superlative fashion, fending off Carlin’s Joe Turney – who extends his lead in the Rookie Cup stakes – by a mere 0.3 seconds in a race cut short after Carter Williams’ JHR machine got beached in the gravel at Coppice.

It was Fortec Motorsport’s Roberto Faria who led the field away well from reverse-grid pole position, fending off Turney and Arden’s Alex Connor at the start to hold the lead, whilst further back Williams made a lightning start to jump to fourth from seventh and apply pressure to the leaders.

As Faria and Turney ran side-by-side down the Exhibition Straight, Horsten took full advantage to slingshot himself around the outside of the race leader into Robert’s Chicane and duly took the lead, with Turney and then Williams further demoting Faria at Redgate.

Things then got worse for the Brazilian as he tried to regain momentum and contact with Richardson Racing’s Luke Browning – back in the action after a mechanical problem yesterday – sent Faria off-track and into the barriers at Hollywood, bringing out the first of two red-flag stoppages.

After a short delay to repair the tyre barriers, Horsten did well to retain the advantage as Williams leapfrogged Connor into second and began to give chase.

Then followed a superb battle for the race lead, with Williams initially taking top spot after a textbook slipstreaming move down the main straight and into Redgate, before Horsten feinted one way and then launched himself down the inside with a bold move at McLeans to take the position back.

That put Williams a little out of shape, allowing Turney to sweep back through into second at Coppice.

Another safety-car period after problems for Fortec’s Mariano Martinez put that duel on ice for a while, with Horsten stealing a march at the restart to keep Turney – chasing the £5,000 prize for Ford’s Rookie Award – at arm’s length.

Though the Briton pushed hard, he would never get another opportunity to force Horsten into an error, with Williams’ off-track excursion at Coppice bringing out the red flags with three minutes to go, and the race ended as a result.

Horsten therefore became the fourth different winner in five races this campaign, with Turney left to consolidate himself with a second successive Rookie Cup triumph.

“It was really hard to concentrate with the red flags making it difficult,” admitted Horsten.

“The first thing I thought is ‘I’ve to get past’. I knew he [Williams] was going to defend as I made that move there yesterday so I waited to the last minute. I qualified eighth and 10th so to get two podiums is great.

“A huge thank you to everybody at Arden Motorsport for all their hard work and support.”

Championship leader Louis Foster completed the podium after emerging on top of a thrilling dice for fourth, which became third after Williams’ troubles. That result extends his lead over Double R Racing team-mate Sebastian Alvarez – fifth on the road in this one behind Alex Connor – to 10 points.

Zane Maloney completed the Rookie Cup podium in sixth overall after a hard-fought contest for the Barbadian racer, six tenths of a second ahead of JHR’s Josh Skelton who recovered well from a first-lap stall to take solid points in seventh.

Martinez overcame his problems to score his first points of the weekend in eighth in the surviving Fortec car, with Browning ninth and Reema Juffali claiming the final point in tenth.

Tommy Foster had been in the thick of the fight for fourth at one stage, but a trip across the gravel at the Old Hairpin curtailed his charge and dropped the third Arden machine back to eleventh at the end.

Contact with another car forced Bart into the pits for a new wing in the final race, though he recovered to finish 8th after a 3rd and 1st in the earlier races of the weekend.