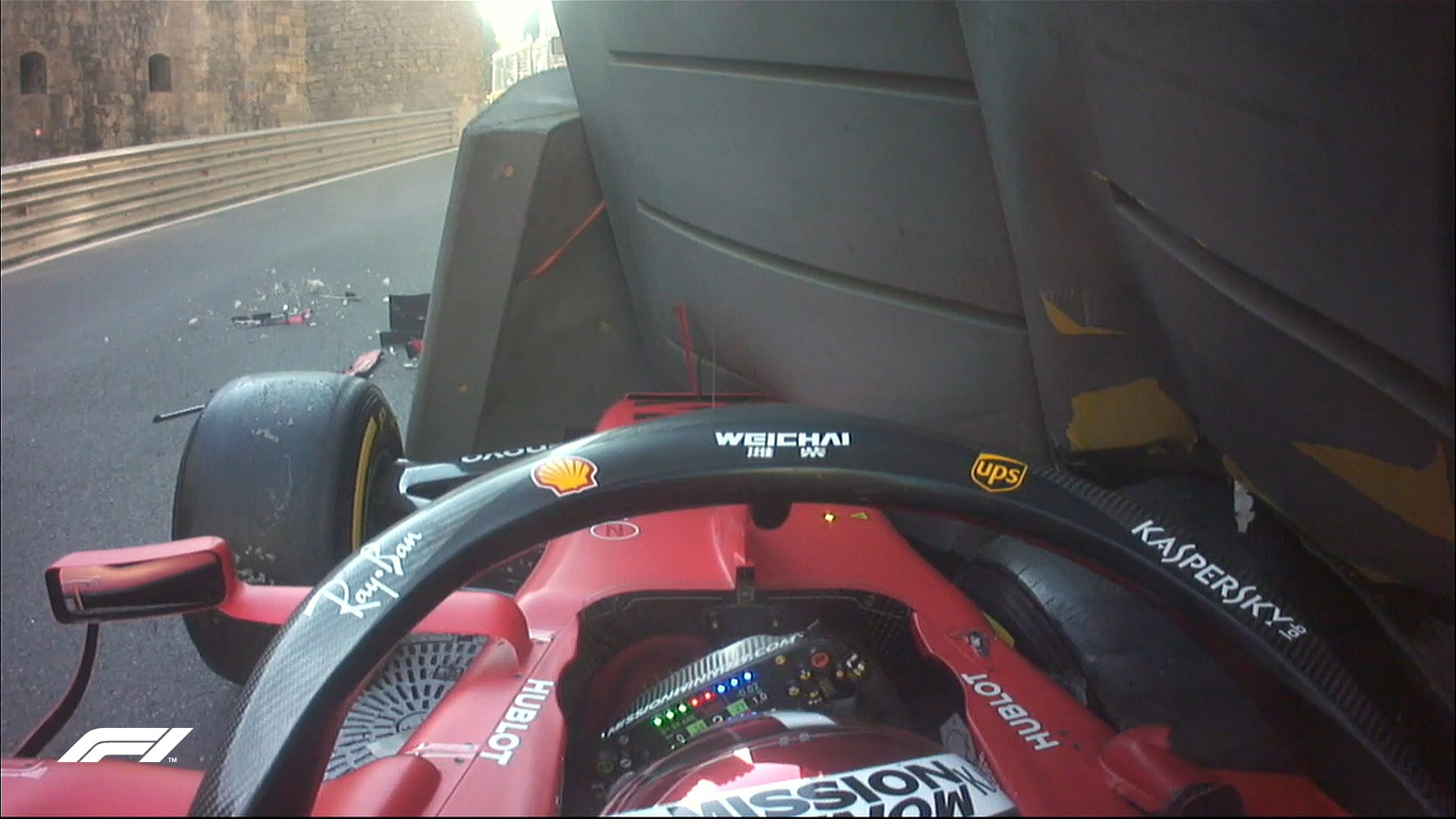 A narrow section of the Baku Grand Prix circuit at turn 8 became the talking point of a disjointed qualifying session and overshadowed Valtteri Bottas‘ second pole position of the 2019 Formula One World Championship.

Charles Leclerc had dominated throughout the earlier practice sessions and appeared to be on course for pole position when he crashed out during the second phase of the qualifying session. Leclerc got it wrong as he was entering the Turn 8 corner that brings the cars around the castle section of the circuit, ending up embedded in the same barrier where Williams’ Robert Kubica had finished Q1, and causing the biggest qualifying upset so far this season.

“I am stupid… I am stupid,” Leclerc cried over team radio before leveraging himself out of the car, smacking its halo angrily and climbing aboard the medical car, having seen a chance to take the second pole of his career evaporate. He did manage to maintain a top 10 start, having recorded a time on the medium compound tyre before his accident.

A flood of emotions for Charles Leclerc after his Q2 exit#AzerbaijanGP ?? #F1 pic.twitter.com/ysEnIbEpgY

Pierre Gasly showed some potential in the Red Bull Honda as he outpaced teammate Max Verstappen in   the first phase of qualifying while Nico Hulkenberg was eliminated in another frustrating session for the Renault team. Red Bull elected not to run Gasly in Q2 due to the earlier infringement that relegated him to a pit lane start for the race. Worse was to follow when Gasly was late disqualified from qualifying with a fuel flow irregularity.

Lewis Hamilton held provisional pole after the first runs in Q3 and looked likely to hold on to the top place after both he and Sebastian Vettel were unable to improve their time in their final runs. Bottas was the last driver still on track with a realistic chance to snatched pole, which he seized with both hands. The Finn ended up 0.059s ahed of Hamilton, with Vettel a quarter of a second further back. .As a result, Bottas will start Sunday’s race from pole, having out-qualified a team mate in Baku for the first time in his career.

Bottas was ahead of team mate Lewis Hamilton by just 0.059s, while Max Verstappen will line up in P4 for Red Bull, his best-ever start in Baku.Behind, the trio of Racing Point’s Sergio Perez in fifth, Toro Rosso’s Daniil Kvyat in sixth and McLaren’s Lando Norris all did fine jobs, while Antonio Giovinazzi secured his best qualifying position of the season in eighth, but will lose that when he has a 10-place grid penalty applied for taking a new Control Electronics element on his engine – with his team mate Kimi Raikkonen inheriting the place. Leclerc will start the race in ninth, having set a time good enough to make it through to Q3 before he crashed and benefiting from the grid drop for Giovinazzi, while the second McLaren of Carlos Sainz will jump up to 10th.

“I’m really happy,” said Bottas. “It was a nice feeling to get it on the last lap. Ferrari have been really strong. Obviously Charles was out by a mistake and as a team, we did really good to be where we are now after such a difficult practice.“It’s all about small margins and I did get a good tow in the last lap. Of course, the corners I had to drive as well, but it’s all about fine details and I managed to hit the sweet spot.”

It was something of a surprise, with Mercedes chief Toto Wolff admitting: “Charles should have been on pole and I think if he had made it to Q3, he probably would have been, but ‘would haves’ don’t count in Formula 1”

Baku has proved unpredictable in the last two seasons, though, as Bottas is all too aware having snatched second almost on the line in 2017 but then led the race in the closing stages last year, only to suffer a puncture that robbed him of victory at the death.“In some races, you feel you’ve done 50 per cent of the job, here it’s nowhere near 50 per cent and anything can happened, as we’ve seen,” said Bottas. “Once I was one lap behind and finished second in the race, once I was leading three laps from the end and I didn’t finish, so I’m glad that as a team where at the front and it will be fun tomorrow.“It’s a very unpredictable race, but we are very happy starting one-two as a team. We have a strong car for the race but here anything can happen, it’s a very eventful race. Whose tyres are going to last the best? Who’s going to have the best pace? Also, with the Safety Cars, how is everything going to pan out? You can get lucky or unlucky, so we’ll see.“Many unpredictable things can happen, so we need to keep the focus as a team and also, for me, as a driver, focusing corner by corner.”

If history is anything to go by, Bottas will have his work cut out to get victory – only one polesitter has converted for victory in three attempts in Azerbaijan…