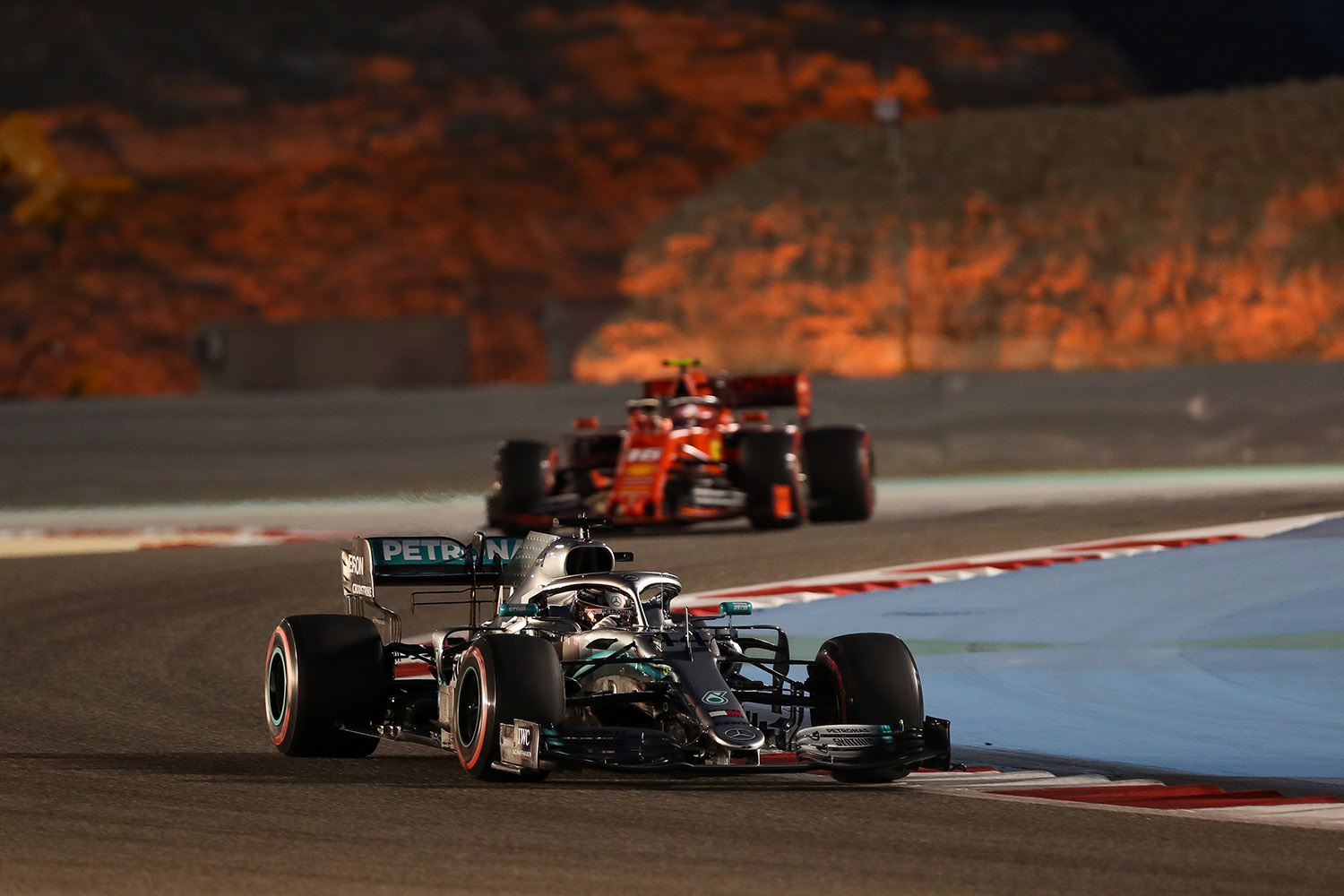 Charles Leclerc was let down by the MGU-H on his Ferrari when victory appeared imminent in the Bahrain Grand Prix. The Monegasque driver led for majority of the race, having fought his way back after a slow start, only to have a suspected MGU-H issue on lap 46 rob his SF90 of its straightline speed and allow the chasing Mercedes pair behind him to pounce.

Leclerc didn’t get off to a great start, as team mate Sebastian Vettel led off the line to lead the first lap, Leclerc dropped to third as Bottas also moved past. Lewis Hamilton held fourth as Lance Stroll and Romain Grosjean clipped each other, while Lando Norris  plummeted down to P18 after taking evasive action to avoid the  Antonio Giovinazzi in the Alfa Romeo.

It was a case of 2-2-2 when Leclerc took 2nd from Bottas at turn 2 on lap 2. The  Finn dropped down to 4th a few corners later after he and Hamilton went wheel to wheel through Turn 6.

The sparks flew on lap 4 when Carlos Sainz and Max Verstappen made contact, which damaged the McLaren’s front wing. A furious Sainz scraped back to the pits with a shower of sparks coming off his MCL34.

By lap 5 Leclerc had regrouped, and moved onto the back of Vettel. He signalled over the team radio that he was planning to attack and did so a lap later. The two Ferraris weaved unnervingly before Leclerc was able to move around the outside of his team mate into Turn 4, much to the relief of Mattia Binotto who had been sweating under the collar during his second race in charge.

Vettel gradually fell into the range of Lewis Hamilton as Leclerc drove off into the distance. By lap 37 Vettel and Hamilton were nose-to-tail. The pair traded places at Turn 4, before Vettel re-asserted himself to stay ahead. Hamilton finally got the move done at the same corner on the very next lap.  Vettel appeared to snap the accelerator hard to stay with the Mercedes and lost the back end of his SF90. The car spun into the run-off as Hamilton disappeared in second place. The front wing of Vettel’s car then flew off down Bahrain’s back straight and forced the German to pit once more for a new nose and an optional set of soft tyres.

Leclerc radioed the team on lap 46 and reported that there was  “Something strange with the engine.”  The team confirmed an issue with Leclerc’s MGU-H which cost him a huge amount of straight-line speed. Hamilton waved as he took the lead on lap 48.

Leclerc lost 2nd place to Valtteri Bottas, who’d been 27 seconds behind the Ferrari when Hamilton took the lead and then seemed set to lose 3rd to the Red Bull of Max Verstappen. He was spared that fate when the Safety Car emerged following a bizarre double retirement for Renault, the two yellow cars stopped in the run-off at Turn 1 just seconds apart with power unit issues. Daniel Ricciardo and Nico Hulkenberg had  touched at Turn 1 shortly before in what capped off a poor weekend for the Anglo-French squad.

Hamilton to claimed his first win of the year behind the Safety Car, while Leclerc at salvaged his first-ever podium behind Bottas. Verstappen was foiled in his attempt to gain a second podium by the Safety Car, and then spun at Turn 10 on the cool-down lap. Vettel recovered to fifth by the race end, just ahead of the McLaren of Lando Norris.

Daniel Ricciardo was summoned to the Steward’s office after the race when he failed to re-attach the steering wheel to his Renault after his car switched off completely as he approached the first corner.. He had been told by his team not to touch his Formula 1 car to “avoid potential electrocution”.

No further action has been taken when the stewards heard that Ricciardo did not replace his steering wheel for safety reasons. After stopping on the entry of Turn 2 with “power unit issues”, his car’s energy recovery system alert light turned red, signifying the car was “electrically unsafe”. Ricciardo was told by the team to shut down the engine and the electrical system and “to jump from the car”. He was told not to touch the car, which the stewards noted is “the normal safety procedure in such circumstances to avoid potential electrocution”. They said Ricciardo felt it would be dangerous to try to replace the steering wheel in these circumstances.