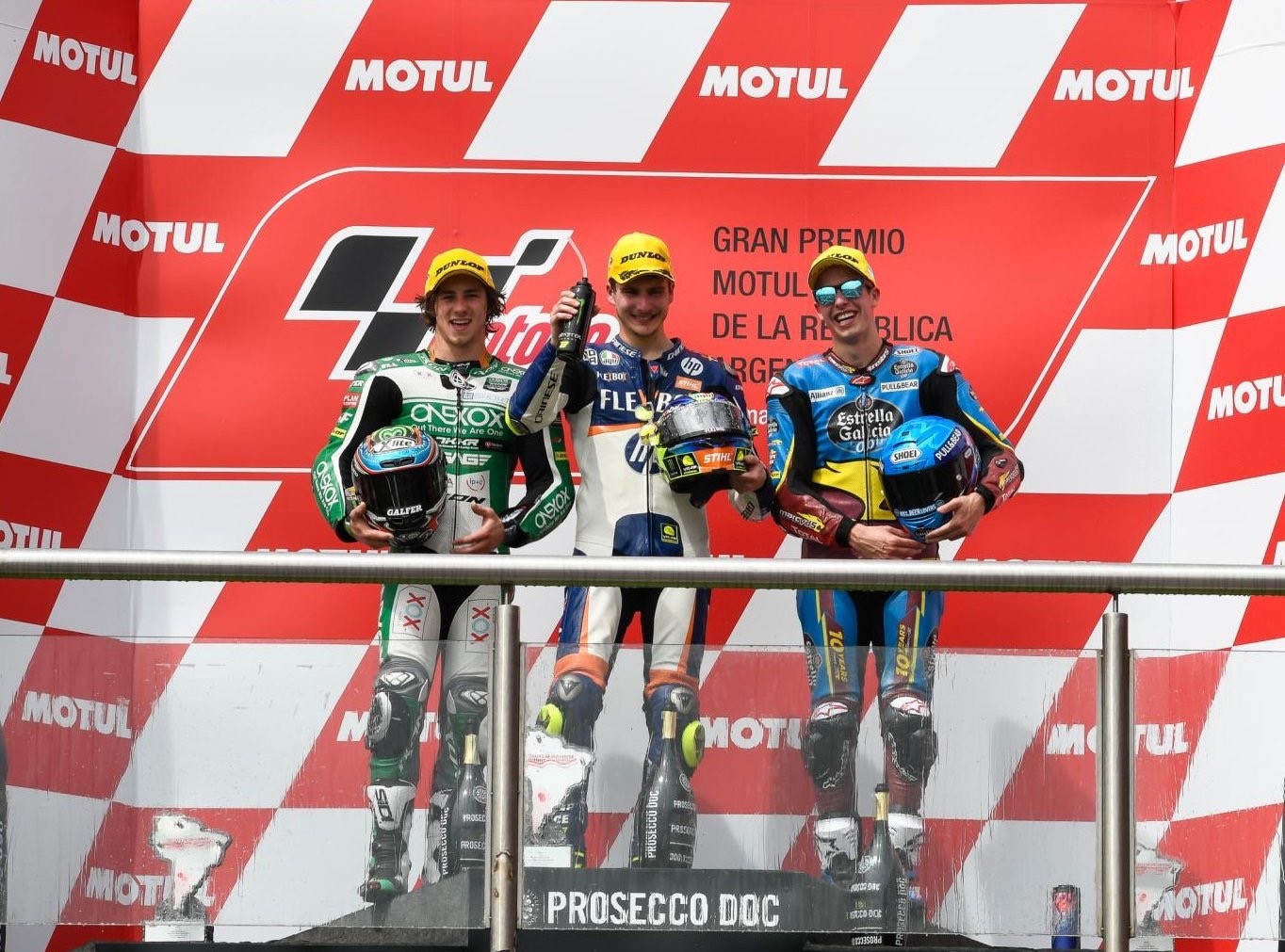 Lorenzo Baldassarri (Flexbox HP 40) made it two from two in 2019 as he took victory at Termas de Rio Hondo, playing the waiting game and timing his attack to pull the pin to perfection in the latter stages. His closest competition came from early leader Remy Gardner (ONEXOX TKKR SAG Team) as the Australian rode to a superb first podium, with Alex Marquez (EG 0,0 Marc VDS) coming home third and elbows out throughout the race.

The first drama hit on the Warm Up lap as polesitter Xavi Vierge (EG 0,0 Marc VDS) suffered a technical problem and was forced to miss the start, with that leaving Marcel Schrötter (Dynavolt Intact GP) the furthest forward and the German capitalising to lead Lap 1. Gardner was soon to strike, however, and the tone was almost immediately set as Schrötter attacked back but was held off by the Aussie.

The front group of Gardner, Schrötter, Marquez and Baldassarri had initially pulled out almost two seconds on the chasing pack but the four didn’t keep it tidy to try and pull away – it was all-out war. Each attack would either see immediate retaliation or a calculated move soon after to serve the rider ahead some payback, and the scenes were spectacular ones as the squabble stayed just about perfectly within the lines of brutal but fair.

Gardner remained the man ahead for much of the first half before Schrötter lunged again with 12 to go, his attack repelled but the German able to fight back and keep the lead. Marquez remained third and Baldassarri lurked in fourth, the Italian remaining an observer as seemed to wait it out and choose his moment.

Meanwhile just behind, Brad Binder (Red Bull KTM Ajo) was on the charge. Starting to make some gains on the first group, the South African closed it down to half a second – and the war ahead raged on, Marquez taking over in second to chase down Schrötter.

With nine laps to go, however, Gardner hit back again and took second, and not long after Baldassarri made his first real move. The Italian sliced past Marquez into third before Gardner took the lead again, and then there was a ‘Baldattack’ on Schrötter to leave the Italian in second. The Jaws music began and with four laps to go Baldassarri finally attacked for the lead and Gardner ended up a little wide, slotting back in just ahead of Marquez. In the lead, though, Baldassarri then pulled the pin as Gardner harried Schrötter, and the Aussie was able to get past but the gap to the leader would ultimately prove too big.

Baldassarri crossed the line in clear air to stamp some more authority on the early part of the Championship, but the celebration just behind him was even bigger as Gardner finally took that first podium. So close in Qatar, the Aussie moves up to second overall in the standings as he broke his rostrum duck, and Marquez managed to emerge from the melee for a valuable P3.

Just behind that, Binder was still on a charge but the South African overcooked it when attacking Schrötter, forcing the German well wide, and that let past both Iker Lecuona (American Team KTM) and Luca Marini (Sky Racing Team VR46). Binder got back past Marini before heading wide again, and the Red Bull KTM Ajo rider then attacked the Italian again on the last lap – and overcooked it again. Contact with Marini sent the him wide as Binder crossed the line in fifth just behind Lecuona, but that wasn’t all she wrote. After the race, the South African was penalised for irresponsible riding and demoted a place. So it’s Schrötter who is classified fifth, ahead of Binder, with Marini forced to settle for seventh.

Tom Lüthi (Dynavolt Intact GP) was a crasher as he tagged the back of Binder early on, as fellow veteran Sam Lowes (Federal Oil Gresini Moto2) made a mistake at the exact same corner at the exact same time and also went down. Nicolo Bulega (Sky Racing Team VR46) suffered an issue with his arm and was unable to finish, having been on for the honour of top rookie after some impressive pace in Argentina.

Termas was another thriller but it’s advantage Baldassarri as we head for Austin. Can the Italian make it three from three? Find out on the 14th April!