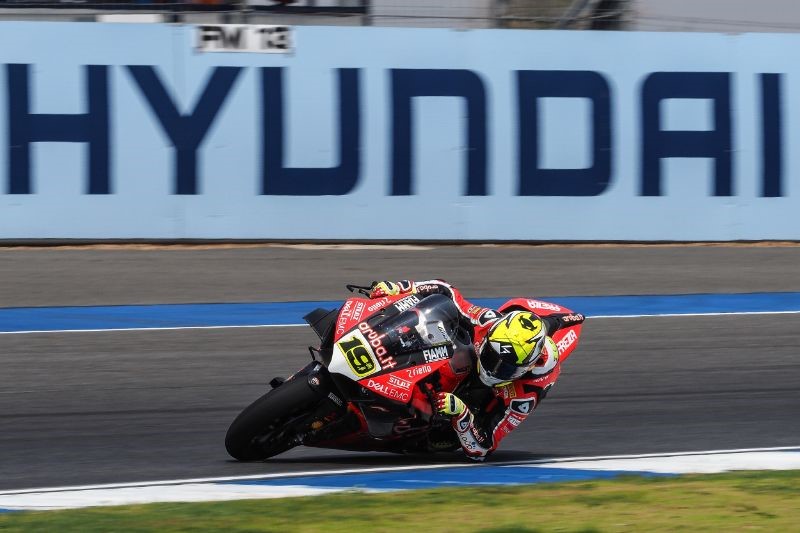 MOTUL FIM Superbike World Championship action concludes at the Chang International Circuit, with Alvaro Bautista (ARUBA.IT Racing – Ducati) being the first rider to tackle the soaring temperatures. The Spanish rider had a strong opening day and heads into the first of two race days firmly in number one spot.

In what is officially the fastest Friday at Buriram in terms of lap times, Alvaro Bautista steadily improved throughout the session, dipping in and out the pits to refine the Ducati Panigale V4 R settings. Remaining at the top with a 1’32.971, he consolidated his pace ahead of his rivals. Teammate Chaz Davies did not enjoy such a great session and was left disgruntled in 11th.

Seven-time Buriram race-winner Jonathan Rea (Kawasaki Racing Team WorldSBK) looked to work on his settings in FP2, remaining in second place and with a consistent pace. He has an impeccable record in Buriram and will look to retain come racing on Saturday and Sunday. Teammate Leon Haslam was one of the biggest improvers in the session, taking just under a second off of his morning time. He finished seventh.

Rookie Sandro Cortese (GRT Yamaha WorldSBK) took over as leading Yamaha rider, with a stunning charge to third position. His first time in Thailand World Superbike looks set to be a memorable one. Veteran teammate Marco Melandri was firmly inside the top six, finishing in sixth. GRT Yamaha WorldSBK look very strong going into Saturday and Sunday, with vast improvements from both riders.

Leading the Pata Yamaha WorldSBK Team charge, Alex Lowes was fourth on the combined timesheets and was one of the first riders to improve, continuing to improve throughout the session. The Lincolnshire rider, who achieved a podium at Buriram last season, was ahead of teammate Michael van der Mark, who improved later on in the session. He was able to slot into fifth overall, with Yamaha as a manufacturer looking extremely competitive.

Eugene Laverty (Team Goeleven) finished in eighth position and as second Ducati rider. The Irishman, who has never managed a race finish better than ninth in Thailand, will hope to translate his pace from today into Saturday’s Tissot Superpole Session.

Britain’s Leon Camier (Moriwaki Althea HONDA Team) placed ninth on combined times and at one point of the session, had the track to himself, enabling him to put in some fast times and work on race pace. Teammate Ryuichi Kiyonari improved his time but dropped places. The Japanese star was only 16th at the end of Friday’s track action.

Making it five manufacturers inside the top ten, Tom Sykes (BMW Motorrad WorldSBK Team) was tenth and continuing to develop the new S1000RR. The 2013 WorldSBK champion completed an important 34 laps throughout the day, whilst German teammate Markus Reiterberger finished in 12th position, just 1.3s from Bautista. 63 important laps were racked up for the team between the two riders across two sessions.