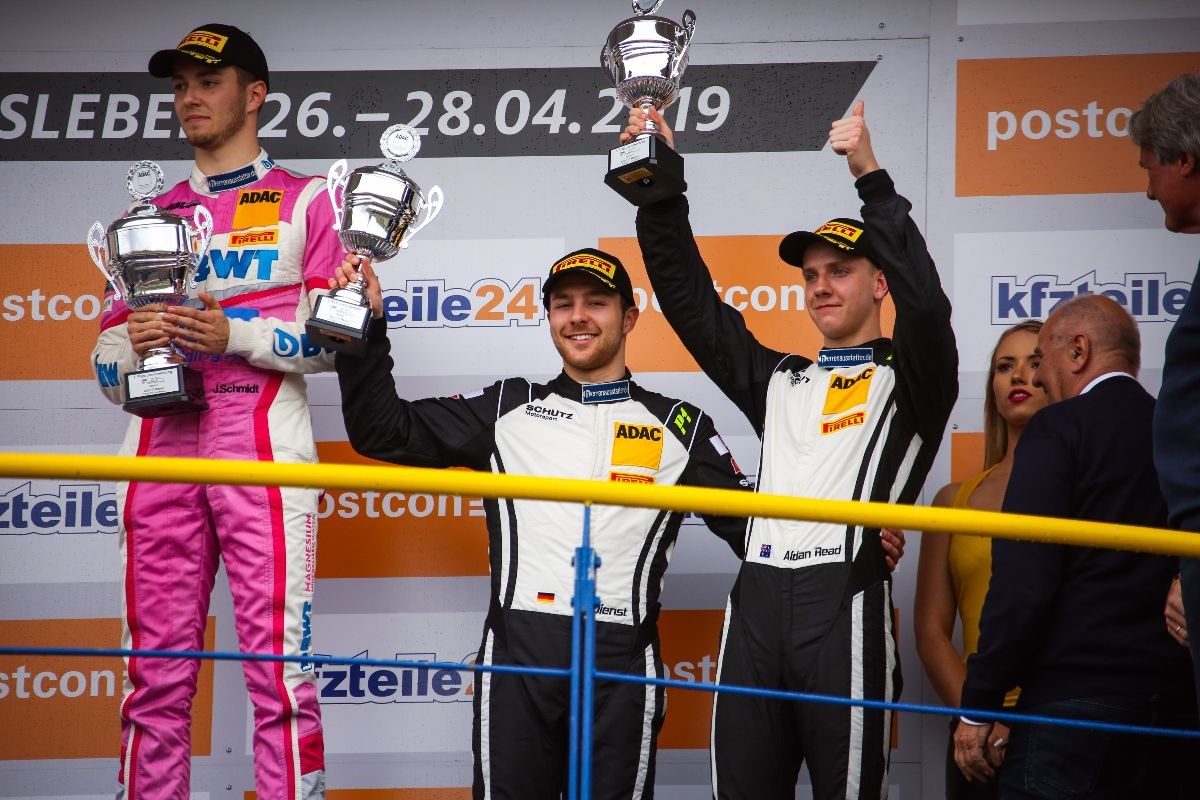 Trophies, pole positions, extreme weather and drama greeted Aidan Read as he took part in his first weekend of European racing in the ADAC GT Masters opening round in Oschersleben, Germany this weekend 26-28th April 2019.

Racing alongside teammate Marvin Dienst in a Schütz Motorsport prepared AMG Mercedes GT3, the weekend got off to a flying start as a terrific team effort saw the car take a sensational and unexpected Pole Position for race one in Saturday’s early morning Qualifying Session.

A superbly worked strategy by the team and a perfectly executed lap by Dienst, along with some good fortune with a late red flag, ensured that focus would be firmly on the young Australian and his teammate in the day’s later race, and so it proved.

Dienst took the start in the hour long race, holding off the pursuing 30 car field of GT3 cars to lead at the start and despite considerable pressure from the Corvette in second position, managed to hold on for the first 30 minute stint to hand the car to bring the car into the pits in first position at the midpoint.

Pit stop accuracy was essential, and the driver handover to Aidan was perfect, rewarding the team’s hard work in practice, where they chose to forgo some track time to ensure the pit stops were well practiced, and the decision was justified as Aidan emerged ahead of the Corvette once again by just fractions of a second.

Now, leading the field of largely professional factory drivers, in front of a sizeable crowd in his debut race the pressure was really on.

Aidan stepped up, defending hard from the Corvette and leading a train of flat-out GT3’s. The pattern continued, Aidan holding position and maintaining the lead and most probably heading for a maiden victory, and then, with seven minutes remaining, the rain came. A brief light shower cam over the track for just a couple of minutes, enough to make conditions treacherous and see many cars spinning into the barriers and gravel.

Aidan, on slick tyres on a semi wet track was powerless to defend and despite his best efforts was undone by the Corvette of Marvin Kirchofer (who had already passed the sister Corvette of Sven Barth who had hit the barriers after a race long pursuit of Aidan). A last lap battle with Christopher Haase and Dries Vanthoor went the way of the Audi professionals, with Aidan opting to bring the car home in P5 overall and P3 in the Junior Trophy rather than end the race in the barriers.

The second race of the weekend took place on the Sunday and Aidan’s GT Masters baptism continued as he would qualify in heavy rain. Having never driven the AMG Mercedes in wet conditions or tried the Pirelli wet tyre this was always going to be a big ask, and P28 was the best that could be managed in the circumstances, opting again to be cautious rather than damage the car as others who chose to push harder did.

From the lowly start position it was always going to be difficult. Aidan made a solid start and picked off some places on what was now a dry track, 30 well matched cars and drivers ran nose to tail for the Aidan’s stint, with Aidan tucked in a pack of cars bringing the car in for Dienst in P22 having made up some ground and setting the car’s fastest lap along the way.

Dienst picked up where Aidan left off after another great pit stop from the team but found himself back in the pack that Aidan was in unable to progress any further, finally bringing the car home in P22.

“What a weekend of ups and downs,” said Aidan. “If you had said before the weekend began that I would finish in P5 on my Masters debut and stand on the podium at my first event I would of course have taken it, but in the circumstances, it feels deflating as we really could have won.

“I had the race lead and knew I had the pace and skills to keep it. I could see the rain coming on the horizon and was hoping it would hold off, but it wasn’t to be. I did my best and put up a good fight when the track became slippery but wasn’t prepared to have an accident over defending a futile position, with cars that clearly had better grip and drivers who had better knowledge of the limits and characteristics of a slippery Oschersleben.

“It was the pattern of my weekend that I would get thrown in at the deep end with a wet qualifying, I can honestly say it was the hardest 30 minutes of my racing career, every corner was like driving on ice and I just could not get any temperature into the tyres.

“In the end I am satisfied with my race performance, I showed that I have the pace to compete at this level and it bodes well for the rest of the season. I head back to Australia with a trophy in my hand and good points in both the main Championship and the Junior trophy. We could have had more, but I have to be pleased with what we have.”

Aidan will return to Europe and the Most racetrack in the Czech Republic for rounds 3 and 4 of the ADAC GT Masters on the 17-19th May 2019.