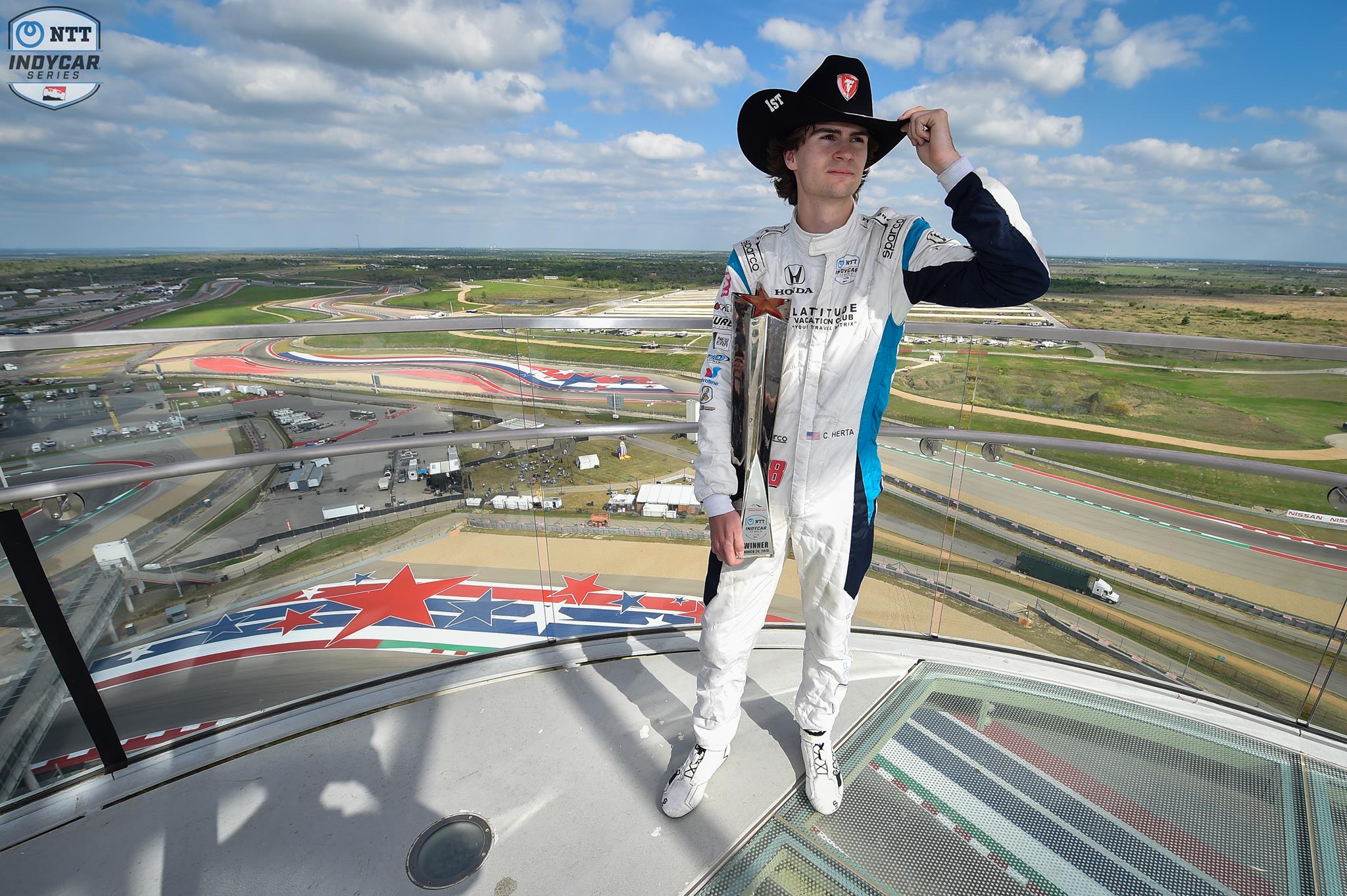 History was made in more than one way at Circuit of The Americas this weekend. Not only was the INDYCAR Classic the first NTT IndyCar Series race conducted at the track, but Colton Herta became the youngest driver to win an Indy car event when he took the chequered flag on Sunday.

The beneficiary of an opportune full-course caution period, Herta led the final 15 laps and won by 2.7182 seconds over Josef Newgarden. At 18 years, 11 months, 25 days old, the second-generation driver became the youngest to ever win an Indy car race, breaking the mark previously held by Graham Rahal, who was 19 years, 3 months, 2 days when he won at St. Petersburg in 2008.

Sunday’s race was just the third in the NTT IndyCar Series for Herta, who finished second in the 2018 Indy Lights presented by Cooper Tires championship before moving up to Harding Steinbrenner Racing this year. Herta was humbled to join the list of Indy car race winners that includes his father, Bryan, who won four times in a 12-year Indy car career and is now co-owner and race strategist for the car driven by Marco Andretti.

“Just to be up with the names of people that have won (a) race, I’m going to live and die an Indy car winner, which is spectacular in itself,” Herta said. “Yeah, it’s a great record at a young age. To be standing up here kind of feels surreal.

“We were not expecting (to win). I think we were going to get a podium (top-three finish) – I think we had the pace for that – but holy crap, man! … It’s spectacular!”

Driving the No. 88 Harding Steinbrenner Racing Honda, Colton Herta started the 60-lap race on the 20-turn, 3.41-mile permanent road course in fourth position. Pole sitter Will Power dominated the first three-quarters of the race, leading every lap under green-flag conditions until the only full-course yellow waved on Lap 44 after James Hinchcliffe and Felix Rosenqvist made contact, sending the latter’s car careening into the barrier on the inside of Turn 19 at the entrance to pit lane.

Fortunately for Herta, he’d made his final scheduled pit stop a lap earlier under green. Race leader Power, second-place Alexander Rossi and third-place Scott Dixon were forced to make their final stops under yellow after the field packed up behind the pace car. Once that trio headed to the pits, Herta assumed the lead for the first time in his brief NTT IndyCar Series career.

Holding off Newgarden on the Lap 50 restart, Herta pulled away to the history-making victory.

“On the restart, we were quick,” Herta said. “We kind of sprinted off. I know we got the quickest lap on that first lap, which was pretty crazy to have the tires up to temp and everything ready.”

The win was also the first for the team co-owned by Mike Harding and George Michael Steinbrenner IV. After fielding a car for Herta in Indy Lights in 2017 and ’18, Steinbrenner partnered this year with Harding to bring the driving phenom to the NTT IndyCar Series.

“He did a phenomenal job,” the 22-year-old Steinbrenner said of Herta. “Colton hit all his marks, he did everything right, the crew did everything they needed to do to keep us out in front of (Newgarden’s) car the whole time. Everything went pretty much perfectly.

Newgarden was satisfied with a second-place finish coming on the heels of his win in the March 10 season opener, the Firestone Grand Prix of St. Petersburg. The driver of the No. 2 PPG Team Penske Chevrolet holds an 18-point lead over Herta after two of 17 races.

“We had a little luck (with the late caution), and I thought that could play into our favor to race for another win,” Newgarden said. “The PPG car looked good and felt good, it just wasn’t enough there at the end.

“A second place is big for us. We talked about the fact that you need to have podium finishes if you aren’t winning races, and this goes a long way to our championship run.”

Power’s misfortune of seeing the late caution period ruin his chance for a win was compounded during his pit stop. The drive shaft broke on his No. 12 Verizon Team Penske Chevrolet as he attempted to leave the pit stall, relegating the reigning Indianapolis 500 winner to finish last in the 24-car field.

“I just released the clutch snap and I could kind of hear it grinding together,” Power said. “I’m massively disappointed, man. You lead so many laps and work so hard all weekend to put yourself in position (to win). If the yellow didn’t get us, the drive shaft did.”

Ryan Hunter-Reay finished third in the No. 28 DHL Honda for Andretti Autosport. Graham Rahal wound up fourth in the No. 15 TOTAL Honda for Rahal Letterman Lanigan Racing, giving American drivers a sweep of the top four spots.

Other notable finishes came from: Sebastien Bourdais, who moved up 12 spots from his starting position in the No. 18 SealMaster Honda for Dale Coyne Racing with Vasser-Sullivan to place fifth; Marco Andretti, who advanced 14 positions to finish seventh in the No. 98 U.S. Concrete/Curb Honda for Andretti Herta Autosport with Marco & Curb-Agajanian; and rookie Patricio O’Ward, the 2018 Indy Lights champion whose 2019 NTT IndyCar Series debut in the No. 31 Carlin Chevrolet ended in eighth place.

Rossi, last year’s NTT IndyCar Series runner-up, recovered from the pit stop under caution to finish 10th in the No. 27 NAPA AUTO PARTS Honda for Andretti Autosport. Dixon, the reigning and five-time series champion, worked his way back to 13th place in the No. 9 PNC Bank Chip Ganassi Racing Honda.

Oliver Askew completed the perfect Indy Lights presented by Cooper Tires weekend Sunday at Circuit of The Americas, winning his second race from the pole position in as many days. The Andretti Autosport driver beat teammate Robert Megennis by 2.2256 seconds in the 20-lap race to collect the maximum weekend points available and take over the championship lead by four points over Rinus VeeKay (Juncos Racing)